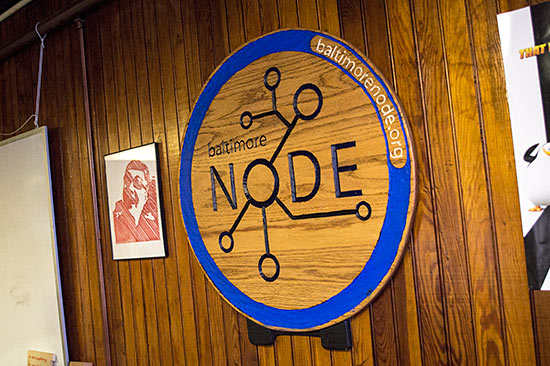 Maze was kind enough to show up and give us a quick tour. He said that they have about 35 members now, and oddly enough Michael D. who was one of the original members of Milwaukee Makerspace is/was a member. I was hoping he could give me a tour but oddly enough he was back in Milwaukee when I was in Baltimore. Missed Maker Connection! 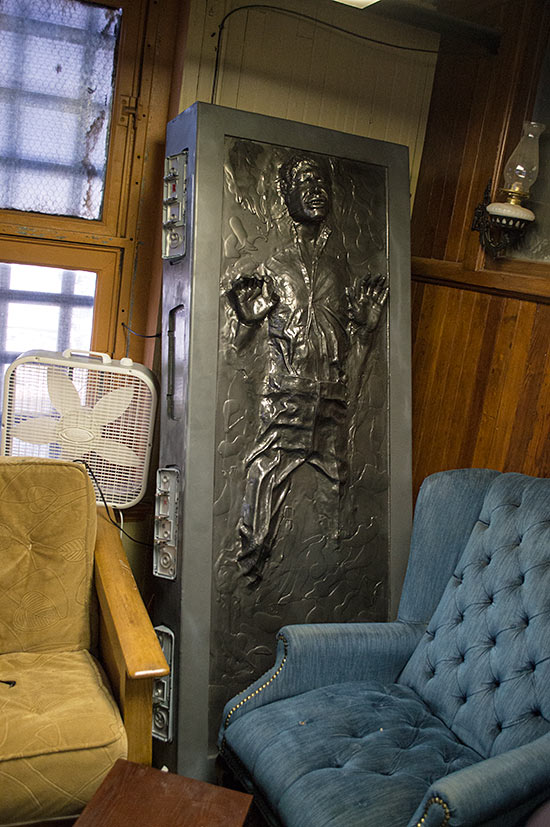 In the front room is our old pal Han Solo… in carbonite! We’ve discussed making one of these at Milwaukee Makerspace but it hasn’t happened yet. Supposedly this one was made from a mold that was made for the film, but wasn’t the one that was used in the actual film. It still looks good, though! There’s also some fine furniture, a box fan, and an old-timey lamp on the wall.

OK, I’m just gonna get this out of the way. Baltimore Node has a blue box. It’s not a TARDIS. It’s a bathroom, which they affectionately call the “Baff-Frume”. 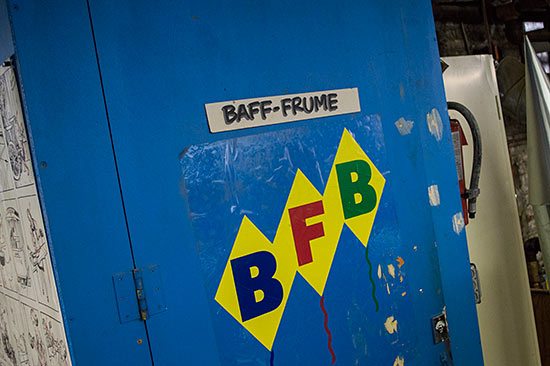 I didn’t get a photo of the inside, but it’s pretty much a toilet and a roll and not much else, surrounded by thin plywood walls. I mean, it works, and luckily, it’s small so it should be easy to clean! 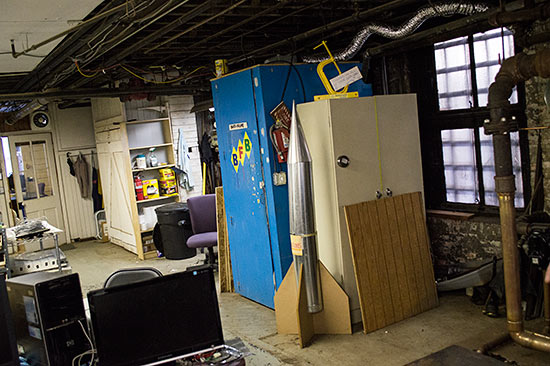 And hey, how many spaces can claim then have a rocket almost as large as their bathroom? (It appears there is also a ventilation fan. Good call!) 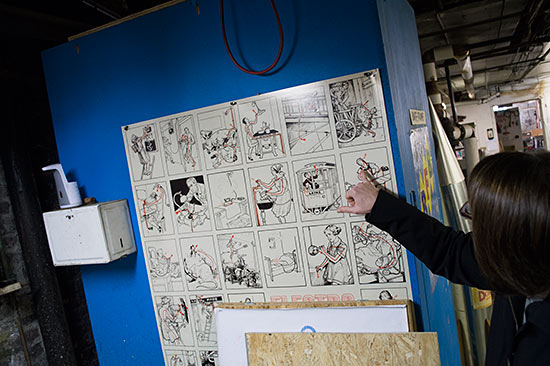 The side of the “Baff-Frume” features a wonderful poster showing all of the best ways to get electrocuted or otherwise killed in Germany. Dr. Prodoehl points out her favorite. 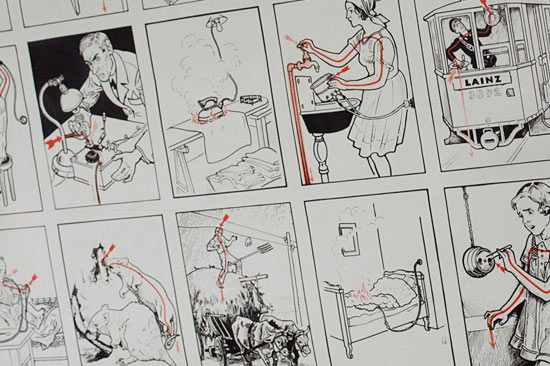 As we all know, everything is more terrifying in German. Especially operating a forklift. Unheimlich! 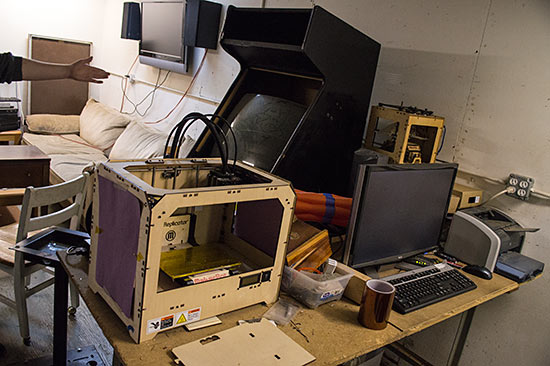 3D printing, with a MakerBot Replicator (1st gen) and an old MakerBot Thing-O-Matic. There’s also an inkjet printer, but I think it just prints ink on paper in two dimensions. There’s also a video game cabinet in the back. We started talking about MAME cabinets, so I can’t remember if this was a MAME cabinet or a specific game. 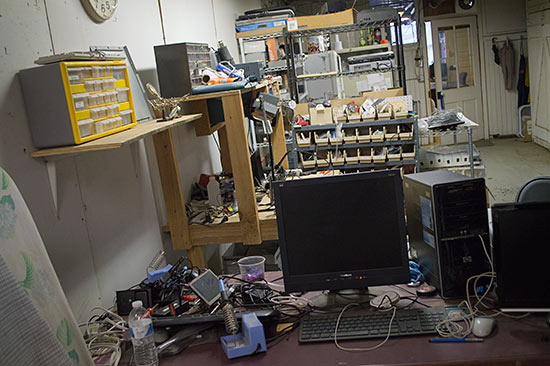 Electronics area, soldering irons, components, oscilloscopes and all that jazz… 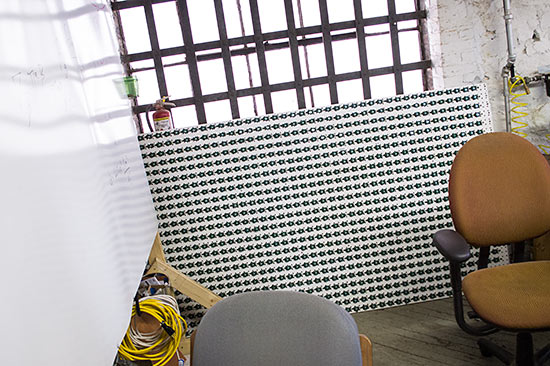 There was a big big LED thingy that was moved to the new space probably didn’t get installed and up and running yet. I asked Maze how many LEDs there were and he said “A lot!” 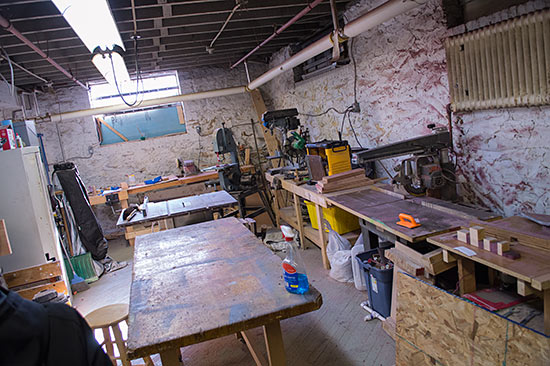 The shop area is in the back. The space was previously used by the current landlord who does wood working on another floor of the building. Having a maker as a landlord is probably an ideal situation. 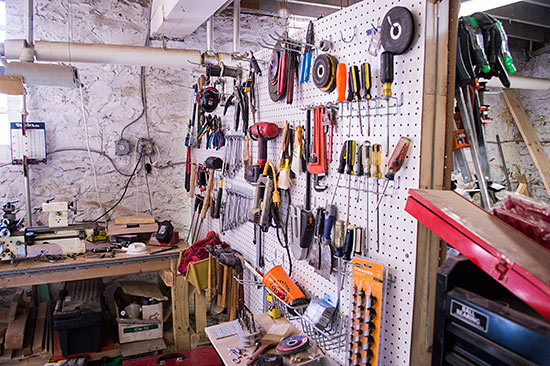 Plenty of tools for making, and it’s even fairly organized… Screwdrivers, wrenches, hammers. Come on down to Cunningham’s Hardware! 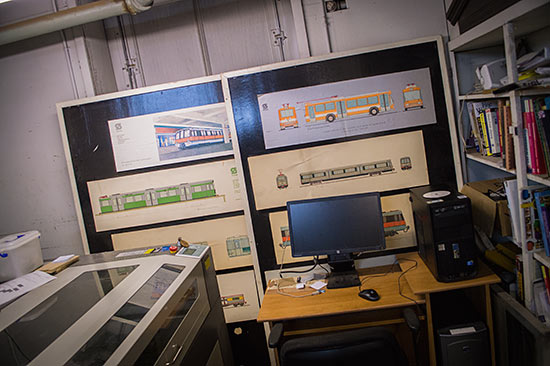 Here’s the big-ass Chinese laser cutter. Also, someone likes trains, or is planning to maker a laser-cut train, or something. Say it with me “Motion card SoftDog no same!” 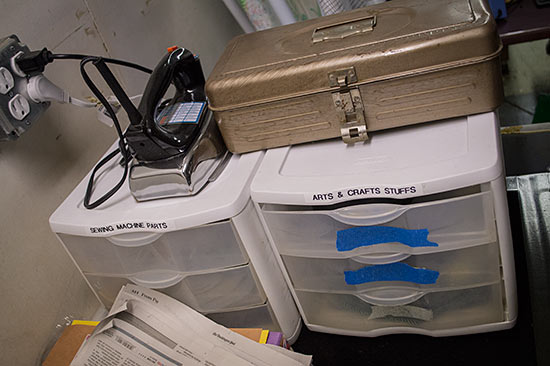 The craft area, where at least two people can get crafty at the same time. Maze said every now and then someone comes in and wants to do some sort of crafty thing.

(I always appreciate that spaces will have some small collection of things for a specific making discipline. I think it was i3Detroit that also had a really small craft area. The effort is worth recognizing.) 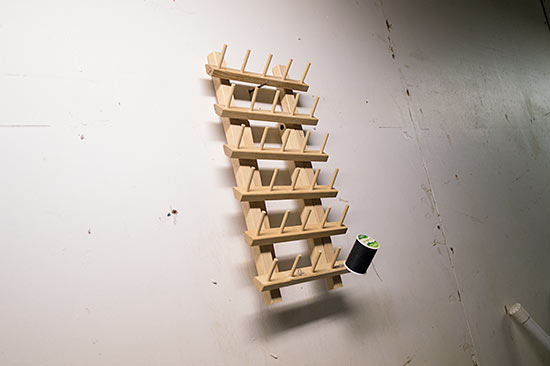 I’m going to call this one “One Thread to Rule Them All” or maybe “The Last Thread” or something. It’s not even conductive thread! :)

Thanks again to Maze for the quick tour. I love seeing other spaces and checking out the equipment and projects, and just seeing how they are laid out and function.

Sadly, I did not get to Hive76 in Philadelphia during this trip, which was my second (failed) attempt. I’m hoping to visit other spaces this year if possible. I keep a list of spaces I’ve visited here.

As you may have read, I recently visited the Baltimore Hackerspace, and they have a high-tech/old-timey logo that looks like this: 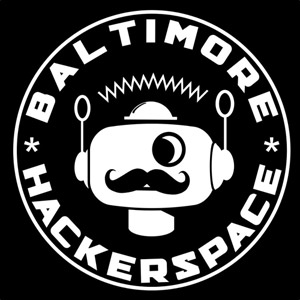 And Dr. Prodoehl (my lovely wife, who spent many years in Baltimore) pointed out it was the “Natty Boh” guy. So who (or what) is Natty Boh?

Natty Boh is National Bohemian, a beer that originated in Baltimore back in 1885. The Natty Boh dude can be seen around Baltimore in the employ of many local organizations, and you can still get National Bohemian beer (though it’s owned by Pabst now) and if you just want some sweet Natty Boh gear, nattybohgear.com can handle that.

(And yeah, the Natty Boh dude does look like the Pringles dude… they’re probably related.)

There’s also some great Natty Boh commercials you should check out, and there’s some sportsball history as well. Heck, even those Tumblr kids like Natty Boh!

Anyway, if you’re in the area, I’d recommend a visit to Baltimore Hackerspace for all your making and hacking needs.