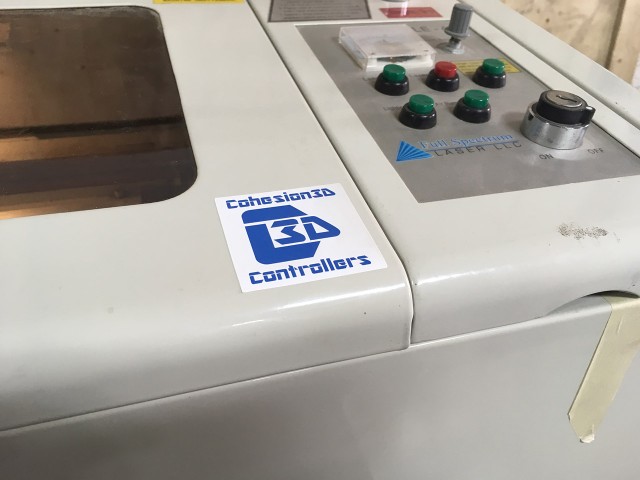 I just completed the “upgrade” of a Full Spectrum 4th Generation Series 40w Hobby Laser. I replaced the existing Full Spectrum controller with a Cohesion3D Mini controller. I’ll do my best to walk through the process with this post. Some of the photos are terrible (sorry about that!) but hopefully I can explain things in text. If I get time I’ll try to shoot a few new photos or do some illustrations.

(If you are reading this in 2020 (or later) the C3D Mini has been replaced by the improved C3D LaserBoard. Looking to upgrade? Get that board instead.)

Oh, I should probably explain why I wanted to replace the controller. Plenty of people run these laser cutters with the stock control board and use RetinaEngrave software running on Windows. I tried to do this, but it didn’t work. I mean, it would work sometimes, but there were too many failures. I should mention that the previous owner(s) didn’t seem to have any issues, but then, we all know how I get along with Windows. Seriously. I first had to get the Windows PC on a network, and that meant I had to add a USB WiFi dongle, and I’m really not a fan of having old Windows 7 PCs connected to the Internet, but RetinaEngrave requires it. I was also informed that Full Spectrum requires new owners to “re-license” the software at $300 before they’ll accept any support requests. No thanks.

So besides me not wanting to use software that was possibly going to cost me $300, and Windows freaking out and ruining etching jobs, I thought replacing the controller and using other software seemed like a good idea. It also meant that if I did it right I could ditch Windows and actually use a Mac (or Linux PC) to do my laser cutting.

The Cohesion3D Mini board can function as a drop-in replacement for those cheap Chinese K40 laser cutters. The FSL 4th Gen is not a K40, but it’s similar in some ways, and I’d found others that seemed to have done the upgrade in the Google+ Cohesion3D Group. [Note: Google+ is dead. Archived messages are here, but I still need to update links.] 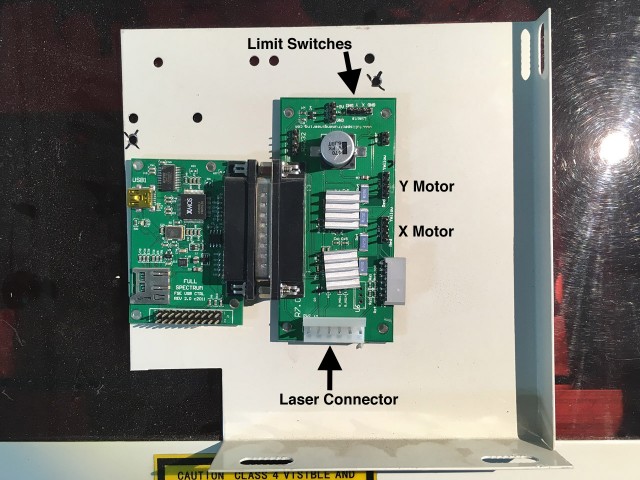 Above is the stock Full Spectrum control board. There are 4 connectors for limit switches at the top, 2 connectors for the stepper motors on the right, and the “Laser Connector” on the bottom. The metal plate is what the board was mounted to. I was able to reuse the plate by just drilling some new holes that matched the hole pattern of the Cohesion3D board. 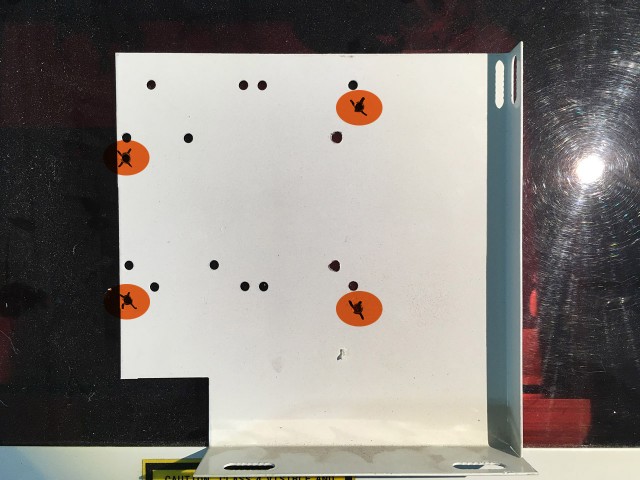 The orange shapes in the photo above show the holes the FSL board was using. I’ve X’d them out with a black marker so I knew they were the “old” holes. 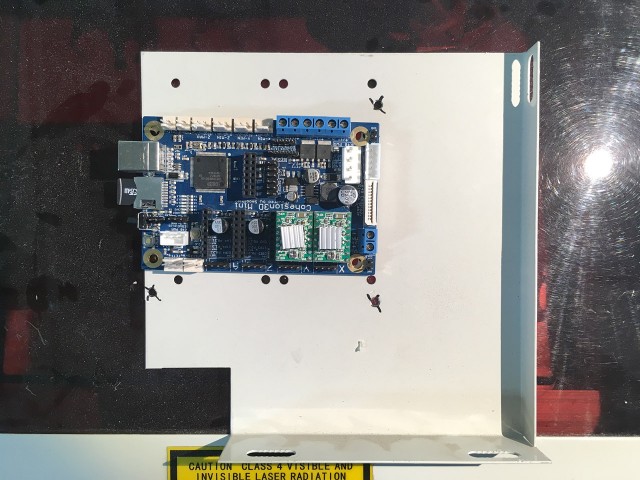 Here’s the Cohesion3D board, oriented so the USB port is on the left so it will stick out the slot in the side of the laser cutter body (just like the stock FSL board did.) I marked where the holes needed to be drilled and then… 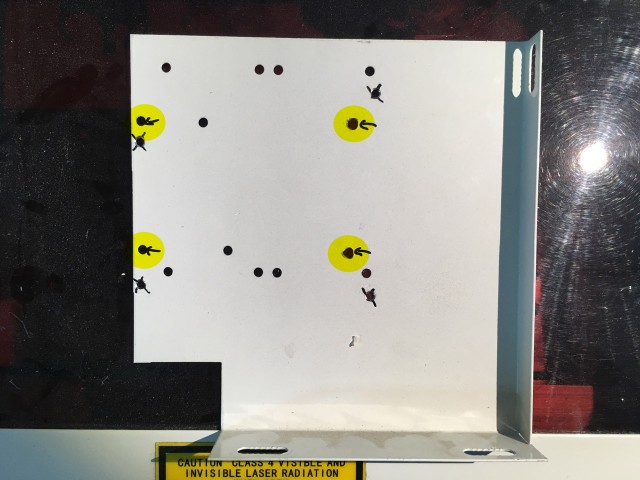 I drilled two holes. Luckily I was able to use the two preexisting holes on the left, so I only had to drill the other two. The standoffs used on the original board worked fine with the Cohesion3D board, and I was able to attach it easily. (Note the Mini should use plastic standoffs/hardware, while the LaserBoard can use metal mounting hardware.) 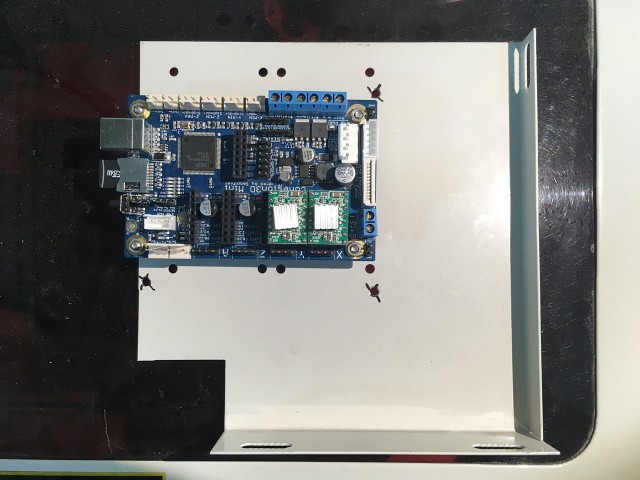 Okay! the Cohesion3D board is now mounted in place, so the next task is to move over all the connections from the old board. Luckily I labeled them all before I removed them. I highly recommend you label them and take some photos to show how they were connected. 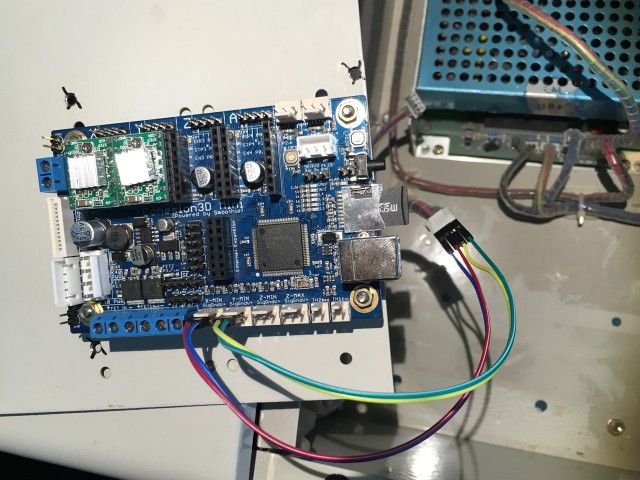 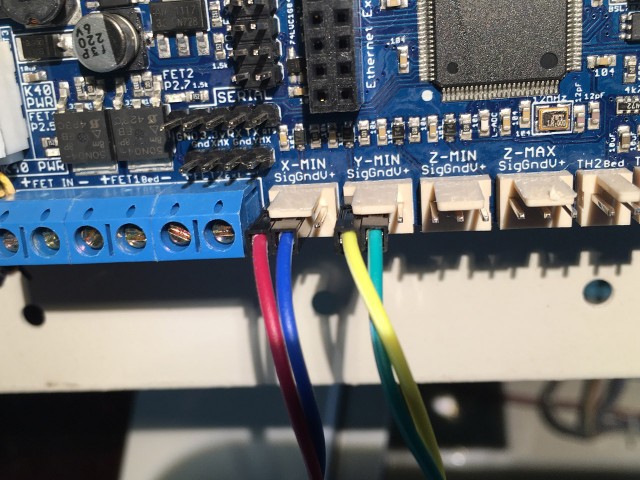 I matched up the GND and SIG wires for the limit switches. Note that I just grabbed some random colors of whatever M/F jumpers I had on hand. With just 4 wires simply connected I’m not too concerned with color coding or labels. 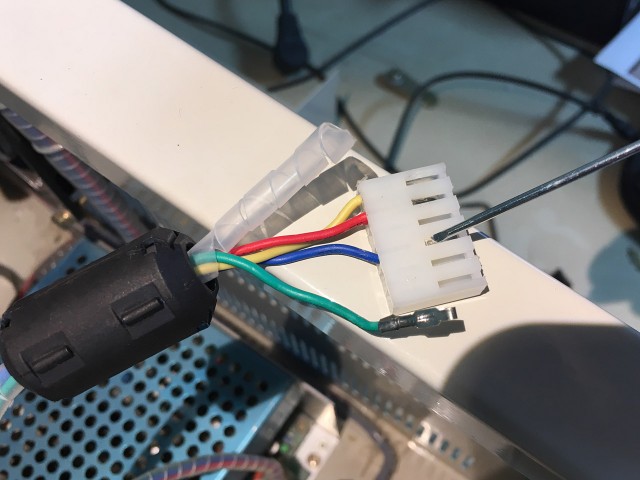 The next step was to take the 6 pin connector that plugged into the FLS board and remove the 4 wires in it. I did this by pressing against the tab of the metal connector with a small screwdriver until I could slide them out by pulling gently on them. 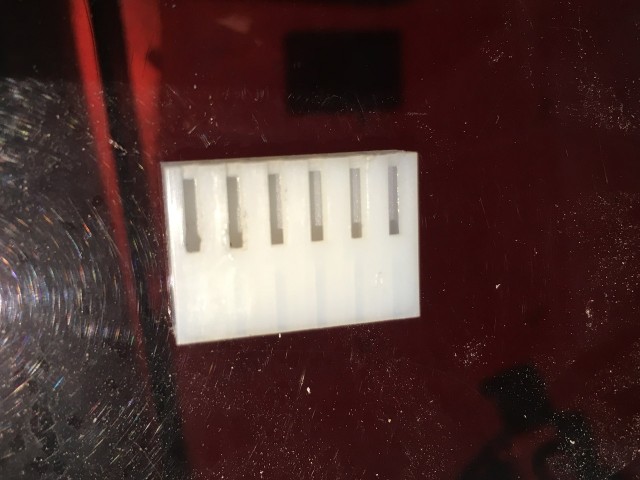 Once I got the wires out I had to modify the connector, first cutting it down to be just 4 pins wide instead of 6 so it would fit in the Cohesion3D board. 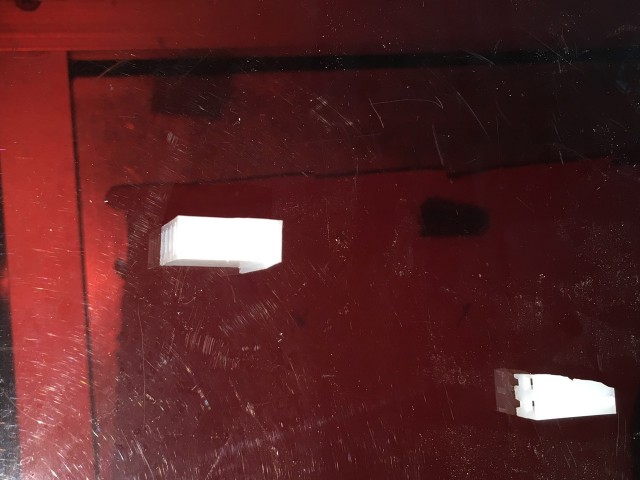 I used a utility knife to press down on the connector and cut off an end with two connectors. This worked, but I think a saw would have been a better option. (Sorry for the poor photo!) One thing to notice in the photo is a triangular wedge part on the connector. We need to remove that because we’ll rotate the connector 180 degrees for the Cohesion3D board. 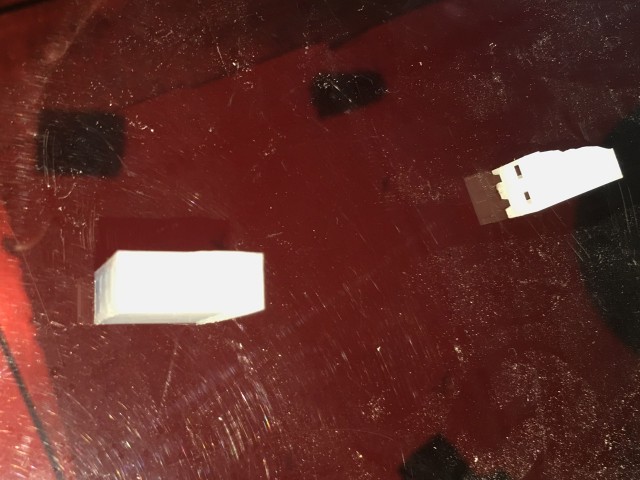 Another poor photo, but hopefully you can see the bottom part of the connector has the triangle wedge thing removed. I put it on the belt sander until it was gone. 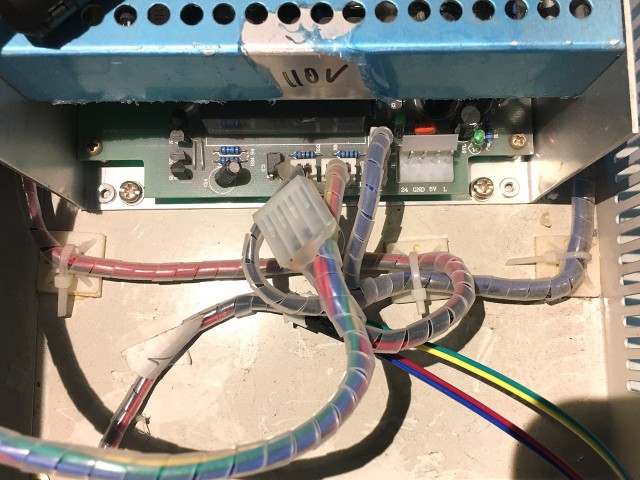 I had to determine which wire was which so I could line them up properly, so I removed the other end of the connector, which was on the power supply. I couldn’t quite see through the plastic to figure out the order, so I used a multimeter to check each end to figure out the wiring. 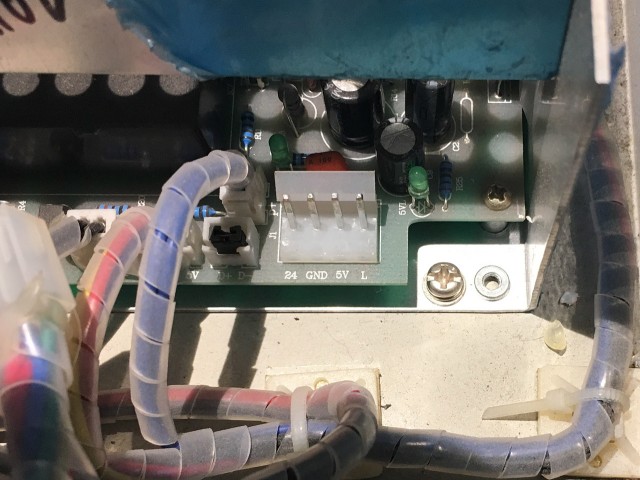 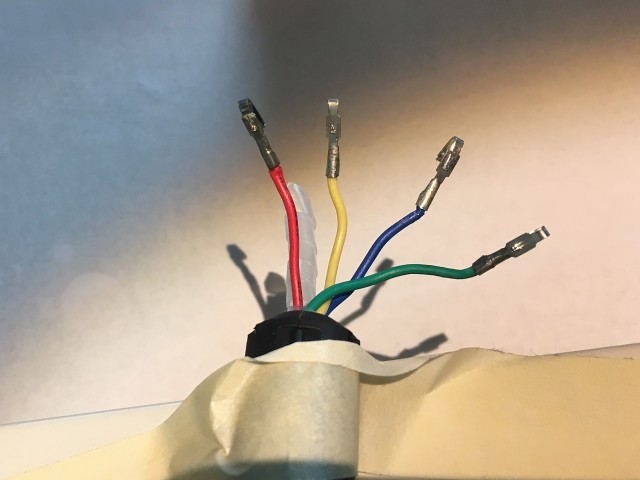 Here’s the order, but the blue wire (5V) is not needed, so I didn’t even connect it, I just taped it up. The other 3 wires I put into the connector. 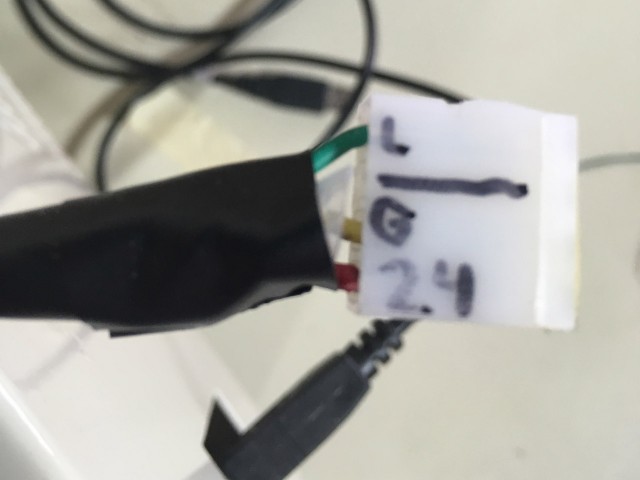 With the wires inserted (except the 5V blue) and the triangle wedge part removed, we can now plug it into the Cohesion3D board. You should definitely consult the Cohesion3D Mini Pinout Diagram while doing all this. 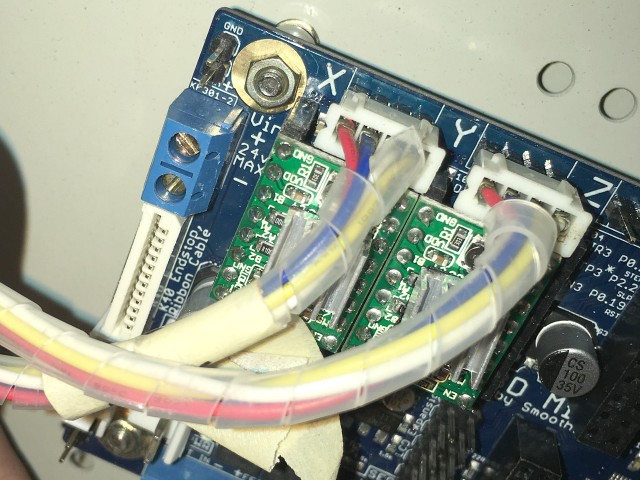 Let’s not forget the stepper motors! These were the easiest, as the connectors matched up fine. The one thing I found out later is that the Y motor connector had to be flipped. So while in this photo the red wire is on the left, I later rotated the connector 180 degrees so it was on the right. This is the nice thing about stepper motors, if they go the wrong direction you can usually just flip the connector around.

At this point I put everything back together, closed it up, and was able to jog the motors to move the gantry around. As mentioned, the Y was originally reversed (like a standard Cartesian 3D printer) but I fixed that. The other issue was that the laser did not fire. I rechecked everything, messed with the config file, and still nothing… 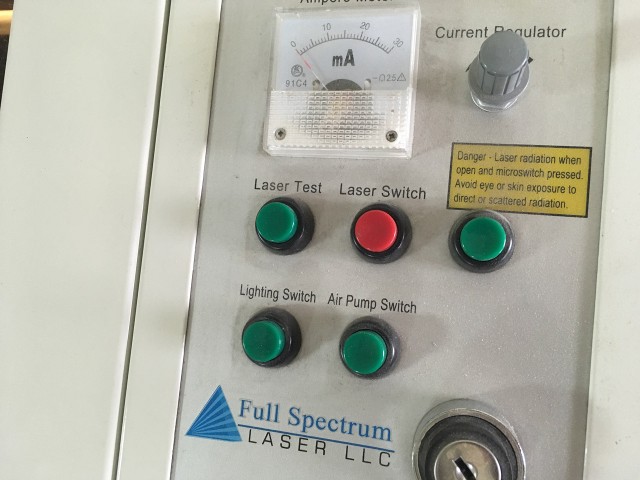 Yeah, see that red button that says “Laser Switch”? It was off. Once I turned it on, I fired the laser! The limit switches worked, the motors worked, the laser worked. It all (mostly) worked! I say “mostly” because while I am able to run jobs and laser, there’s still a little bit of configuration to do, so we’re only about 95% done, but… we’ll save that for next time.

I’ll also talk about the software and firmware in the next post, but for now I just wanted to get the board installation covered.