Linux has made great strides, as has Windows, but as often is the case, they are still missing the details. And the details are what often set things apart.

Take a look at the Lycoris Desktop. There’s a page titled Take Out The Trash. I know, the title is meant to be cute and friendly (something Linux is usually not) but the text of the page reads: 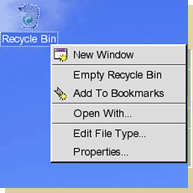 The word ‘trash’ appears three times in the text. Look at the accompanying photo and you’ll see something called ‘Recycle Bin’ and a command titled ‘Empty Recycle Bin’ in the contextual menu.

It may seem like I’m picking nits here, but think about telling a novice computer user how to delete a file.

To delete a file, drag it to the trash.

Where is the trash?

I don’t see it.. but there is something called the ‘Recycle Bin’ – should I recycle my file?

The trash is not the recycle bin and vice versa. If you don’t believe me try dumping all your leftovers in your recycle bin and putting it out by the curb. In some places you’ll be fined some outrageous fee.