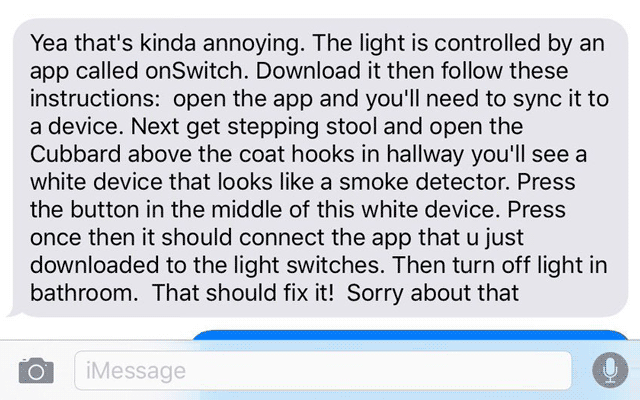 I love @internetofshit on Twitter (and reddit) and things like Stupid Shit No One Needs & Terrible Ideas Hackathon, not just because they are hilarious, but because they reveal some truths about technology some may ignore.

The Internet of Shitty Things is here. Have all of your best home appliances ruined by putting the internet in them!

Back in 2011 (or maybe 2010?) I ventured into the “Internet of Things” world a bit, and I’ve played with ideas since then, and watched as companies imagined everything connected to the Internet, typically with no thought to security.

Whether or not Cate’s tweet is true, it points out the fact that as we add technology to things we risk making them overly complicated and prone to failure. Turning on a light shouldn’t require installing a damn app or syncing anything. We live in a tactile world, and in my work (designing and building educational museum exhibits) we don’t want to turn everything into a touchscreen interface, for good reason.

Check out a few of these light switch mods on Thingiverse, including Frankenstein Light Switch Plate, Arcade Button Light Switch, and LEGO Light Switch Cover. These concepts all demonstrate that the light switch can be re-imagined as a fun activity, and not relegated to some app running on a digital network.

In other news, I recently tried an Oculus Rift, and while watching a corporate video inside of a virtual world was <sarcasm>completely amazing</sarcasm> I was surprised how comfortable the goggles were, and the first idea I had for them was an application that would allow me to wear them while in lying in bed reading, which I do a lot of while suffering from insomnia. Either a great use case or a great idea for the Stupid Hackathon.

Well that’s enough incoherent rambling for one day, I need to go read the specs on a TTL laser…