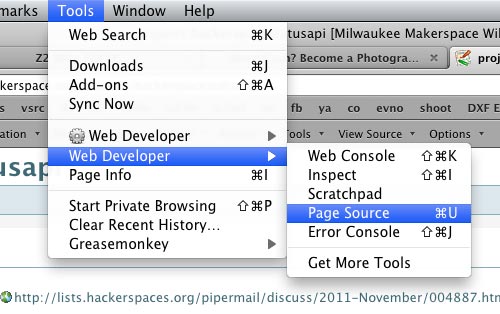 Here’s a Chrome annoyance… I don’t like that the ‘View Source’ command is under a menu titled ‘Developer.’

It’s bad enough that it’s a submenu and not readily apparent at a top level, but to stick it under ‘Developer’ seems almost as bad as putting it under a menu titled ‘WARNING!’

I’m sure the people behind Chrome believe they are making things simpler for users, right? I mean, such things should be hidden from the “normal” people, as they wouldn’t understand it.

But the thing is… when I learned to write HTML, the number one tool to aid in learning was the ‘View Source’ command. I know this was 15 years ago, but I’m not convinced a better method has come along yet. (If it has, let me know.) I’ve always liked that the ‘View Source’ menu was up front, easily available, calling out to anyone curious as to how a web page worked. Just a click away…

I always feared that a browser would come out that didn’t include a ‘View Source’ option, but I’m pretty sure even Internet Explorer has one.

Oh, and another thing (consider this #138) why do they hide the protocol? I actually like to know if it’s http or https and have the ability to easily toggle between the two. I guess I’m just a developer and these things scare and confuse normal people though…

(And yes, I know the screenshot is Chromium and not Google Chrome but the UI is the same in both.)