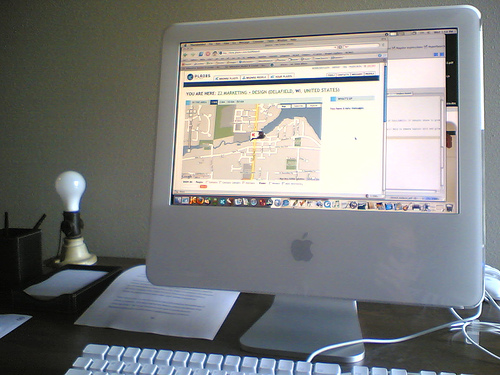 While at PhotoCamp, Kevin was kind enough to let me see his Cr-48, which is a Linux laptop from Google which relies on The Cloud™ to do its magic.

For some reason, one of the features he showed off was the ability to boot up really quickly. In fact, he counted while he booted up. I wasn’t too impressed.

Actually, I think my comments were along the lines of “Yeah, it takes my MacBook longer to boot up, and boy, that sure annoys me every 4 to 6 weeks…”

Honestly, I rarely shut down my MacBook, and instead just put it to sleep. Waking up from sleep takes a few seconds at most. Still… I thought I should test things by shutting down and booting it up again. To get to the login screen from a cold boot took about 1 minute. Logging in took about 1 minute. Launching Firefox (and loading 4 tabs) took less than a minute. So in total, it was probably under 3 minutes to boot up.

Believe me, I know boot time is important. The RED ONE boots fairly slowly. in fact it’s been said that when booting up the RED, it’s the longest 90 seconds of your life.

Besides all that, the Cr-48 looks like a fairly nice little laptop, despite the fact that it’s all hobbled in what it can actually do in the world of media creation and hacking…