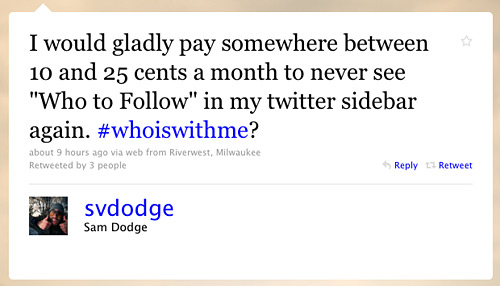 I’ve uploaded a Greasemonkey script to Userscripts.org. It’s called WebGrader Link Rewriter and it takes the goofy Javascript used by WebGrader.com and makes real links you can click on and open in a new tab/window. I made it because the developers of the site wrote what I consider poor code.

I should note that I contacted the company that develops WebGrader a few weeks back and said I could suggest improvements in their system, and they replied to me pretty welcoming. I have not gotten back to them yet, as I’ve been busy, but writing this script took me about 10 minutes. (Yes, I pretty much copied an existing script someone wrote to fix Haloscan comment links.)

Userscripts.org looks pretty awesome for those of us who want to put fixing sites into our own hands. I would like to be able to choose a license when uploading a script but hey, I’ll forgive that for now. (Maybe it’s all public domain? I dunno…)

I do worry that Greasespot “The weblog about Greasemonkey” hasn’t been updated since May 2007. I hope it’s not abandoned. Then again, I should look around more, since I’m new to this. There is also a wiki at wiki.greasespot.net I should explore.