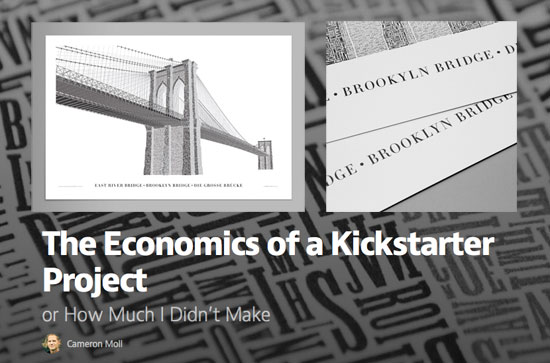 There’s a great post by Cameron Moll on Medium titled The Economics of a Kickstarter Project (or How Much I Didn’t Make) which breaks down the numbers and offers some good advice for would-be crowd-funders.

I don’t know much about Cameron, and I won’t speak ill of him or his abilities, in fact, I love the Brooklyn Bridge piece he created, but I’ve worked in the creative industry (and the print industry) long enough to understand the importance of proofing things. Oh, I call it “proofing” but Proofreading is the more correct term.

About 20 years ago I worked for the creative division of a printing company, and I just happened to be tagging along to a press check with an account executive and they thought I’d like that the brochure being printed had a domain name on it. (Hey, it was the late 1990s!) When I pointed out that the domain name being printed was not one the company owned, there was quite a bit of commotion. There may have been some swearing and yelling as well. (Note: printing ink on paper is often very expensive!)

Over the years I’ve seen time and time again that making mistakes in print is a sure way to lose money. Indeed, had Cameron hired someone to proof his work, and even if he paid them $1000, he would have doubled the amount he had left at the end of his campaign had the proofer caught his mistake.

Proofing is not the same as “checking you work” because you are often blind to your own mistakes. You need another pair of eyes, hopefully a well-trained pair of eyes, to see the things you can’t see. (I’ve seen artists get so obsessed with the details of the type they are designing that they spell their own names wrong!)

Don’t take this post to say I don’t make mistakes, I make plenty of them! I make spelling mistakes and grammar mistakes, though they typically aren’t in print. I made one earlier today on a Facebook post, and one of my coworkers caught it for me. That’s how it works. You can’t do it alone.

Note: I’m currently working as a Technical Editor for a book that should be out this summer. If you enjoyed the previous book I worked on, I think you’ll like this one too. If you need a Technical Editor, get in touch with me.