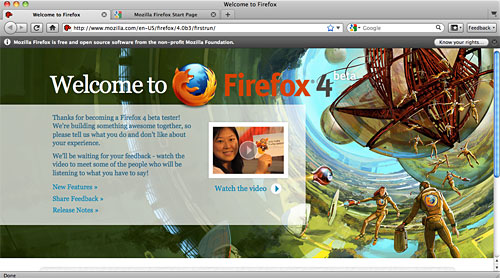 Although not the same kind of speed as startup speed, javascript speed is another area where Mozilla is looking to improve with Firefox 4. It hasn’t been put into the beta builds quite yet, but should hopefully land soon. You can track the progress as well as compare to V8/Nitro here: http://arewefastyet.com/ (As you’ll see in the note at the bottom, they will be combining the tracing JIT with the method JIT before it’s completed, and they will be complementary)

Jordan, the Javascript engine in Firefox definitely has a way to go as far as speed. I mainly did this experiment as a result of people saying things like “Firefox takes forever to start up!” or “Chrome loads pages faster!”

I’m also probably not someone who uses super-heavy Javascript sites, so I’m not sure how useful my tests would be in that case.

I haven’t tried with the Fx4 betas yet, but on my machine (look ma, no science!), Firefox takes ~10x as long to load from a cold start. That is with approx the same number of extensions in each browser (I have more in Chrome than in Firefox).

I went to disable a few in Firefox to see if it would affect page load time but I would have had to restart my entire browser.

With that in mind, I haven’t yet compared the number of plugins, rather than extensions.

Phil, there is a definite difference in launch time between Firefox 3 and Firefox 4… and I’m assuming it’s even better if you can start with a “clean” profile as I did. Let me know if you get better results with the Firefox 4 beta.

Yep, just in the middle of installing now.

Firefox 4 feels much faster so far, although at the expense of legible title text in tabs, which is a bit of a bummer. I went to give some feedback but got “Your comment contains swear words (titles).” ho hum.

This is b4. I don’t think it would be fair to use this version until I can read the titles of my open tabs – it would influence me too much, so I’ll wait for another version before passing judgement, but it *does* feel snappier so far.

And yes, I’d like titles to be a bit more readable. Either by default (preferred) or via an extension if necessary.

I’m glad it feels “snappier” … did you start with a brand new profile, or use your existing profile?