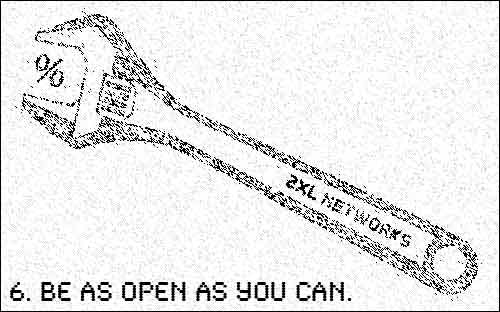 I think for this current project (the USB Button) I’ve been pretty open, especially since the original post that spawned this whole thing laid out the components, instructions, and code to make what I plan on selling.

Could I be even more open? Probably, but right now I’m more focused on getting the product out there, and seeing if people will buy it (and it looks like some people already want to.)

If someone else decides to use our files, make no significant modifications or improvements, and just manufacture them and compete with us, they’ll have do so much more cheaply than we can to get traction in the marketplace.

If they can do so, at the same or better quality, then that’s great: the consumer wins and we can stop making that product and focus on those that add more value (we don’t want to be in the commodity manufacturing business).

Now, in my case, someone could easily do it cheaper. Well, I guess easily is an opinion. But again, if someone does all the work, and produces a decent product at a lower price, then good for them! And as mentioned, the consumer wins. (I’d probably even buy one!)

I’ve already got a guy who is telling any potential customers that they can just go to ebay and buy “one of these” for super-cheap.

By “one of these” he is referring to a plastic USB footpedal from China. I’m not trying to brag, but the button I’m building is all quality parts, and it’s in a die-cast metal enclosure, and it looks really nice. (Well, I think so.) If you’re running a photo booth at a wedding do you want a cheap plastic footpedal or something that looks awesome. Sure, you can rebuild the footpedal to look awesome, but not everyone wants to spend the time (or has the skills) to do so.

I thought about ignoring the comment from Gary, but hey, more power to him! I’m not going to ignore it, I’m totally going to talk about it, and link to it. How’s that for open?

1 reply on “Maker Business – Be Open”

I think that you can safely compartmentalize both your goals and the market.

My impression of your goals: self-improvement (developing new skills in product development), making a better world for others (both in terms of the availability of a nice kick-ass button and in terms of making the design available for others to use), and developing income.

I think that you have already achieved the goals and I think you’ve got your place in the market. There will always be the loyal competition, but as you note, that’s not a bad thing — indeed, it gives you a basis for elevating your product in the market. If, on the other hand, you were depending on income from mass production and sales of this switch, I would suggest diversification :).

jim k.
Of course, I may be completely wrong