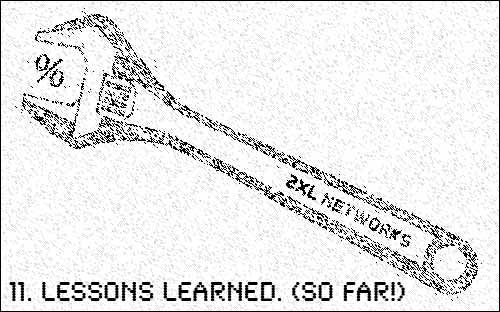 This one goes to 11! While there are Ten Rules for Maker Businesses, and I covered them all, what I didn’t do was a full-on follow-up post. So here it is.

And here are the 10 rules, which I’ll address individually below. (Each one links to the original post on the subject.)

1. Make a profit.
I’m happy to say I did this. It took about a month and a half to sell 10 units, and after all was said and done, I believe I hit the 2.3x rule. There were some miscellaneous costs in there, but even with those, I did alright. This is important because if you don’t make a profit, it’s difficult to consider continuing. As far as how much my time was worth, I think I did OK. Not great, but OK. I’m convinced that with increased efficiencies things will improve.

2. It takes lots of cash to stay in stock.
I kept my stock low, which kept costs down, and helped ensure I didn’t have overstock just sitting there. Sales were slow at first, and when that happens you get a bit worried. You start to think about sales, or discounts, or something. I stuck with it and didn’t do any of those things, which turned out fine. Actually, I got lucky in that I had 4 orders in a two day period, right after I wondered if I’d ever sell another unit.

3. Buy smart.
I bought just the right amount of components to build 10 units with no real leftover. This worked out well, except in the case where I got really picky about quality. Buying larger quantities can help lower the shipping costs, but that doesn’t always work, and sometimes buying in bulk is just too costly.

4. Basic business rules still apply.
No problem here… I felt confident on this one, and there were only very minor things I had to deal with business-wise.

5. You get no leeway for being a maker.
I’ve not needed any leeway yet (fingers crossed) as all of the customers have been awesome, and I’ve done my best to be awesome to them. You know, there’s only been 10 customers so far, but it’s been close to 100% pleasant. The only issue I had was with people who are interested in the product, exchange a number of emails with me, and then I never hear from them or receive an order. It’s not extremely disappointing or anything, but just a little bothersome.

6. Be as open as you can.
I’ve been pretty open, maybe not as open as I could have been, but since this whole adventure was based on a pretty open blog post, I think we’re good with this one. I did re-write the code a little bit mainly to make debugging a little easier, and I should probably push that code out, but honestly that’s probably not a huge deal as there’s code out there that works fine right now. I’ve also been sure not to bet the farm on this one product, which is why I’m keeping the production run small. If the opportunity disappears, it won’t affect the business much.

7. Create a community to support and enhance your products.
With a small user base and a simple product, there hasn’t been much need for a community. If one magically appeared I’d support it, but I probably don’t need to run out and force one into existence.

9. Marketing is your job.
Doing the marketing was fairly easy and I didn’t need to get too aggressive. I’ve got a lot of experience with branding, marketing, writing, photography, and building web sites… and that’s what I did. I first built the store, and then shortly after that I got my Etsy store. The Etsy store was definitely a good idea, as it accounted for almost half of the sales.

10. Your second most important relationship is with your package carrier.
While I learned a lot about shipping, not all of it was fun, but hey, I’ve got shipping down pretty well now. I’m sure there are ways I could improve things, but so far I’ve not been annoyed enough to investigate them. I was disappointed to discover Etsy doesn’t allow you to require a phone number for orders, since FedEx seems to require a phone number for shipping. (Yes, I could enter my own number, but I’d prefer to have the customer notified if there are delivery issues.)

Branching out.
I did make a modification to the product… I decided to offer The (Bare) Button for sale, based on a number of people asking for it. I ended up getting an email from a guy who wanted the bare button, we agreed on a price, I got one ready to ship, added the order page… and never heard from him again. Luckily I didn’t really invest much (besides a little bit of time) into this diversion, because I’ve yet to make a sale of The (Bare) Button. Still, it’s an easy thing to offer in the store, as it’s just the button without the case, so I can easily keep it in there for the DIY folks.

In conclusion, the experiment went well, I learned quite a bit, and I made a profit! I’ll keep this going in small manageable quantities and see how far it goes. I’m trying to be realistic in this endeavor and I know that it’ll probably not be any sort of huge money-maker, but if it keeps going as it has been, I’ll be pleased.

Oh, and if you know anyone who needs a button… :)

Just got one! Thanks for setting this up!

Awesome! Thanks very much. :)