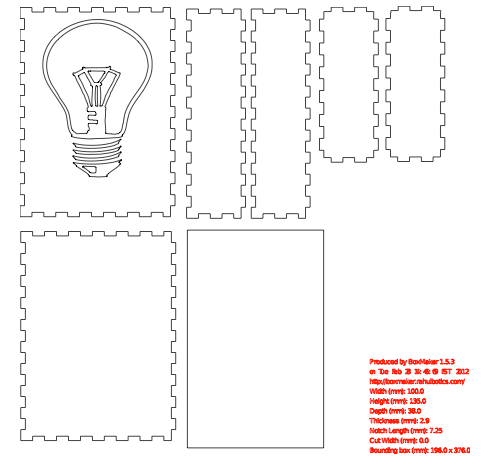 In our last adventure cutting wood we had success! And it was good… So I decided to try the awesome BoxMaker again and I’m pleased with the result as compared to the previous attempt.

Above you’ll see the template I created from BoxMaker with a light bulb on one of the faces. I got the original bulb from OpenClipArt and tweaked the SVG file in Inkscape until I was pleased with it. (I may still need to adjust a few of the thinner areas, but I definitely like it.) 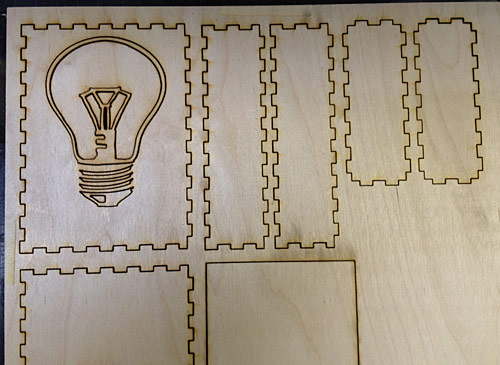 In the next image you can see the results of the cut. This is using 3mm Baltic Birch plywood, which I highly recommend for the 25 Watt Laser Cutter that Milwaukee Makerspace has.

There’s actually one extra piece in the lower center which you’ll notice has straight lines, and is not part of the box, but this is the interesting part…

One thing about using the laser cutter is determining what settings to use. For this cut I used 100% power with 3.2% speed. It takes a few passes to complete the cut (maybe 4 or 5) but it works. I found that at slower speeds there is a higher risk of flames (which are bad!) and you can char the wood a bit too much. I actually didn’t care about the charring as I will be painting this box, but if you want less charring, up the speed a little bit, and know that you will need more passes. 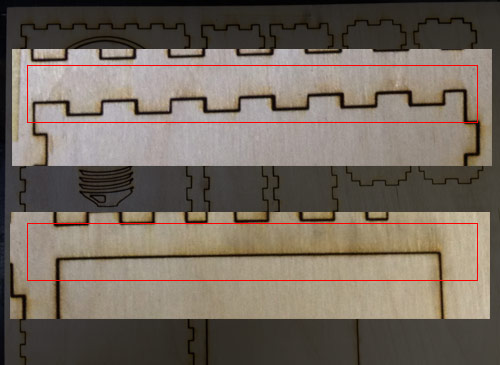 Oh yeah, the interesting part! In the image above, I’ve highlighted two areas. In the bottom red rectangle you’ll see a lot more charring. This is due to the long straight line that the laser cutter follows when cutting. I noticed that the notched areas, with lots of small short lines, had much less flame, while the long continuous lines had a lot more flame. (It was still within an acceptable amount of flame, but this is why I didn’t want to go lower than 3.2% for the speed.)

So I’m definitely calling this one a success, if only due to the fact that I’m pretty certain I’ve got good settings to use when cutting 3mm Baltic Birch plywood.