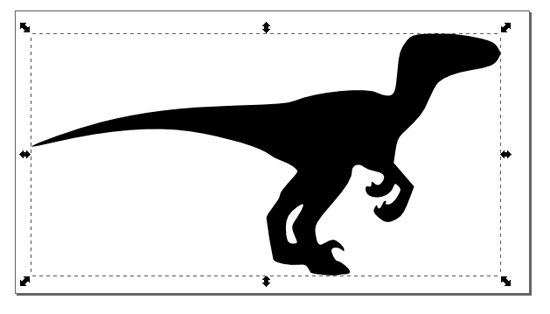 I’m not an expert on dinosaurs, but the velociraptor is one of the more respected of their ilk (so I am told) and you really do have to respect such a clever girl properly, so I grabbed this velociraptor silhouette from OpenClipArt knowing that I’d find a use for it some day… 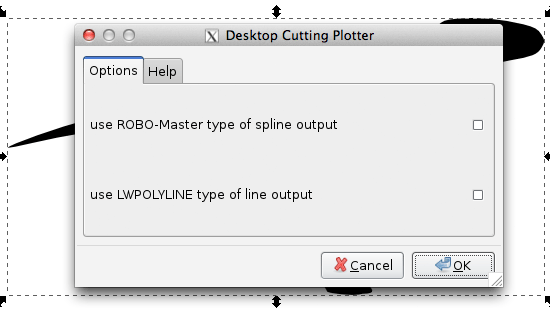 ?) I opened the SVG file in Inkscape and exported it as a DXF so I could import it into Silhouette Studio. 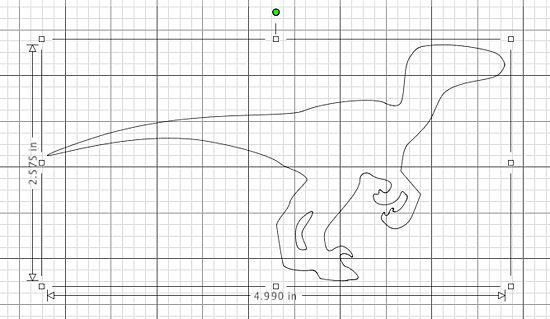 Now, typically when I export DXF files from Inkscape for 3D printing or laser cutting I need to first remove all the curves by making them straight lines, like I did for my MAKE piece, but the Silhouette software doesn’t mind the curves. 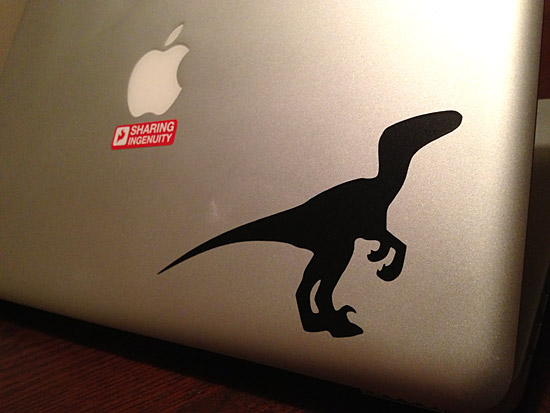 A quick cut of the vinyl and I’ve got a Velociraptor stuck on my aluminum MacBook… but wait, there’s more! 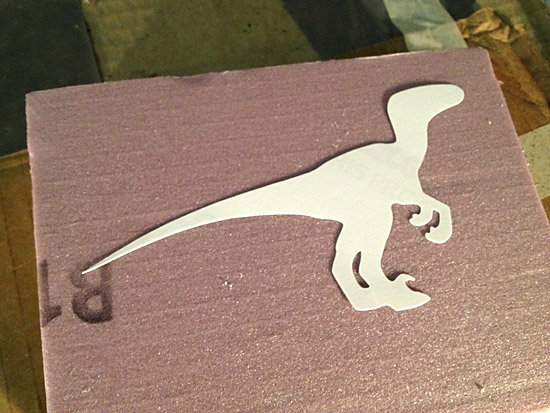 Since I also had a test cut made with paper, and there was some pink foam in the workshop, and we were planning an aluminum pour at Milwaukee Makerspace the next day, I had this crazy idea to use my drill press as a makeshift mill and cut out a piece of foam in the shape of the velociraptor. (You may remember Kevin’s FEAR that was made in a similar fashion.) 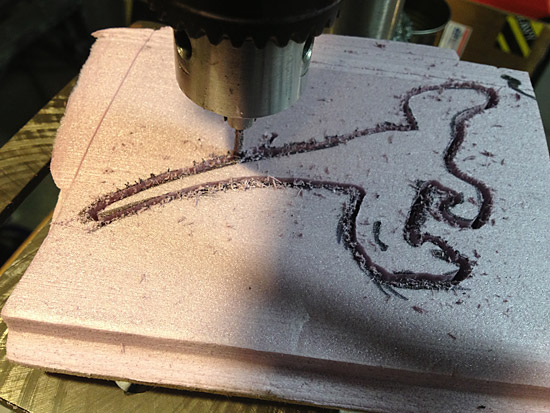 I jammed the base up into the foam so the bit was sticking all the way through so I could just run it and not have to lower it. I was then free to use both hands to move the foam around and cut it. (My jigsaw broke last year, but even if it still worked, I don’t think the cutting area of the blade would have been tall enough to fit the pink foam piece I had.)

Obviously using the CNC Router at Milwaukee Makerspace would have been more precise, but I really didn’t have time to do use it. (This was all pretty last-minute.) 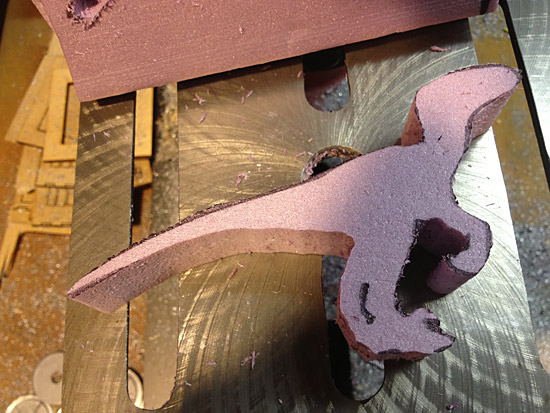 It worked pretty well! With the first attempt I used too large of a bit, but the second try turned out good. I ended up bringing both of them to the casting. 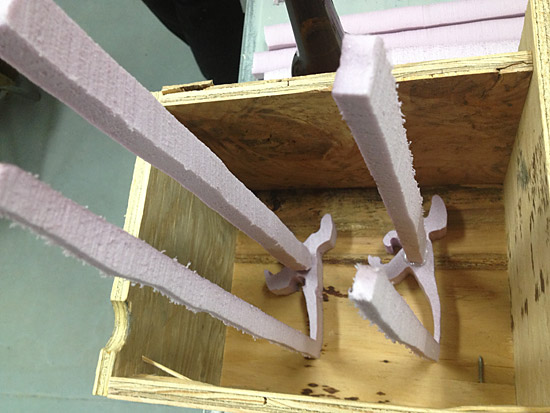 For the aluminum casting you need a box, so we built a box and attached some foam sticks to each piece. We used a glue gun, but you need to be careful not to melt or deform the foam too much. I’ve been told that using the glue gun before it gets too hot, or unplugging it and letting it cool before use might be helpful.

The wider sticks in the center of the body are mean to funnel the molten aluminum down to the piece, while the smaller stick on the tail is meant be a vent. 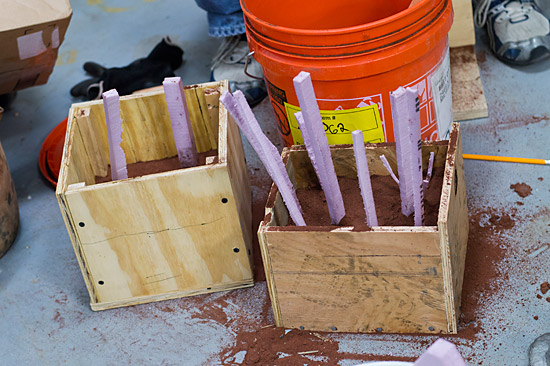 The next step was packing the pieces in petrobond, which is a casting sand with oil in it. You need to tamp it down and pack it tight. (Somehow I managed to do a pretty good job at this.) 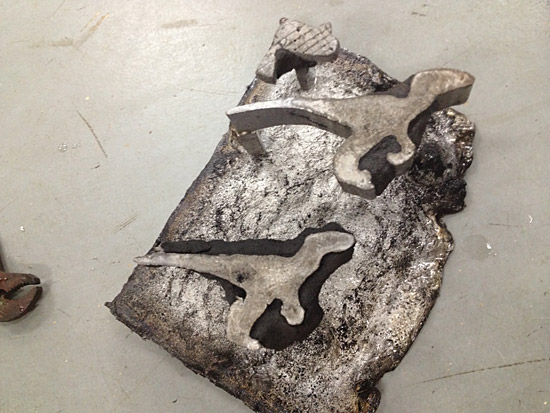 Here’s the pieces fresh out of the box (after cooling of course!) There’s also a tiny bird up in the corner. We had a snake/worm shape as well, but somehow it disappeared in the process. Kevin (who helped me with all of this) then chopped my dinosaurs from the big chunk with a bolt cutter. 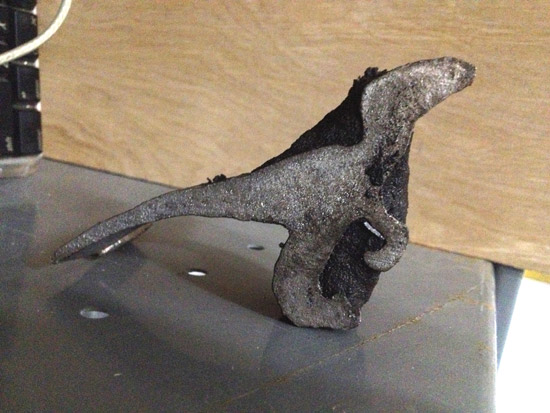 And here’s my (mostly) done Aluminum Velociraptor! I’ve still got some cleanup to do, and then need to decide how to finish it, but that’s another project, and yeah, I’m already planning some pieces for our next pour in a few weeks!

Big thanks to Bret, Matt, Kevin, and everyone else who helped make this happen. It was an awesome event, and pretty amazing to show up with some pink foam and walk away with a cast aluminum piece. (Here’s a short video of the event.)

3 replies on “The Aluminum Velociraptor”

What did you use to cut the vinyl velociraptor?

I’ve got a number of stencils I plan to cut with it. They aim it towards scrapbookers but it’s just another CNC machine to me, and I’ll be using Inkscape quite a bit to create art for it.