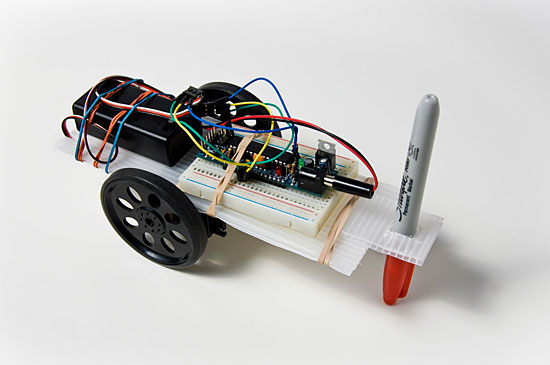 There haven’t been a lot of updates to my Friday Night Drawbot project lately, but things are picking up again.

Pictured above is version 1, which was built back in 2011, on a Friday night, in my basement. It drew circles. (And that’s it.) 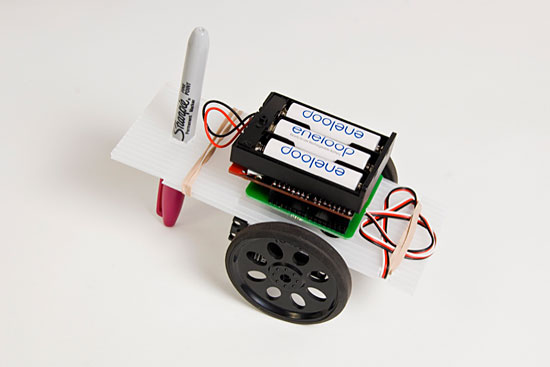 The programming got much better, and I ended up rebuilding the chassis a few times. This is what I like to call “version 3” of the Friday Night Drawbot, and is still in use today. 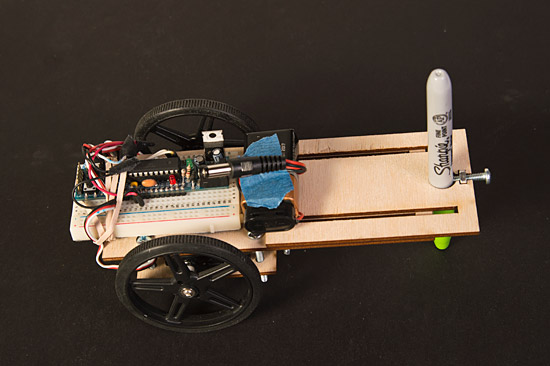 Let’s call this version 3.5. We’ve shed the old corrugated plastic in favor of a replacement designed digitally, and created with laser-cut wood.

The front plate that holds the pen can now easily slide forward and back, and is held in place by a pair of screws and wing nuts. 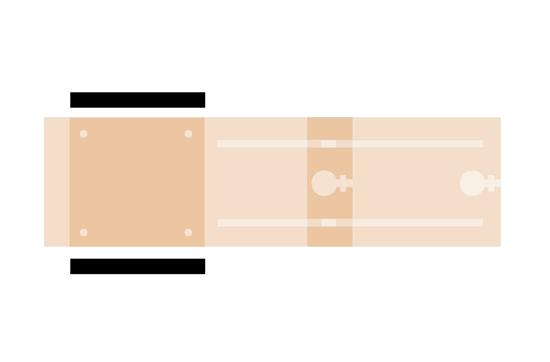 I started the redesign process by taking apart the drawbot and measuring things with the calipers. I then used Inkscape to create (on multiple layers) the parts needed, which consists of the main plate, bottom plate, and pen extender plate. 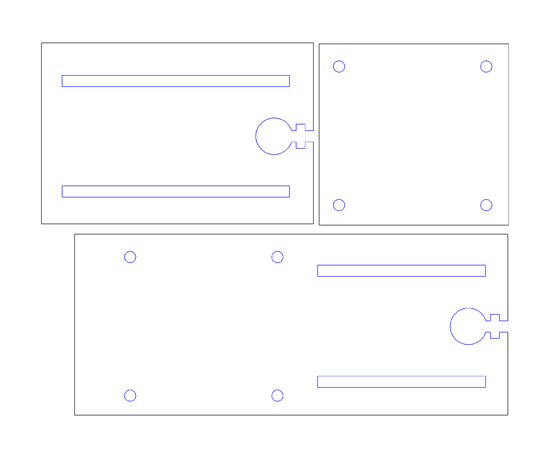 Here are the pieces separated out and ready to be laser-cut, or, cut in some fashion, I should say… 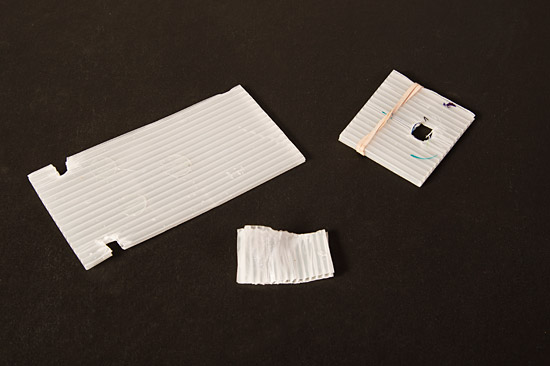 I tore apart the old chassis which was hot glued to the servo motors, and held together with rubber bands. I had to heat things up to release the glue, so it’s a bit destroyed. No loss! 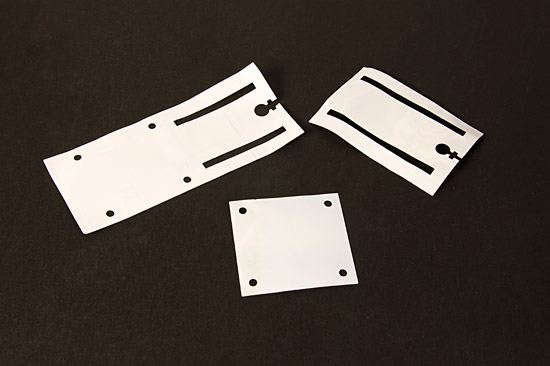 This is a paper prototype I created with the Silhouette Cameo, which does a fine job of cutting thick paper. I often prototype cutting things with the Silhouette because, well, it’s in my basement, so I always have access to it (unlike a laser cutter.) I could easily print on paper as well, but I find that with the cutter close by and easy to use, I use it a lot. It helps to have physical things cut and in front of you sometimes. 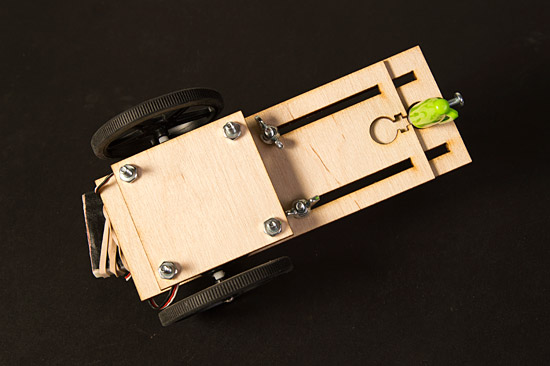 Here’s the bottom view of the laser-cut version. There’s a lot of 8/32″ hardware holding things together, mainly because SAE is cheaper than Metric around these parts. (Drat!)

You can see that the two wing nuts hold the pen extender plate in place, so it’s easy to loosen the nuts and slide things around. (The slot could probably be a little narrower next time.)

There’s also some regular nuts holding the bottom plate to the main plate to hold the servos in place. The 3mm Baltic Birch flexes a bit though, and may not be the best solution. 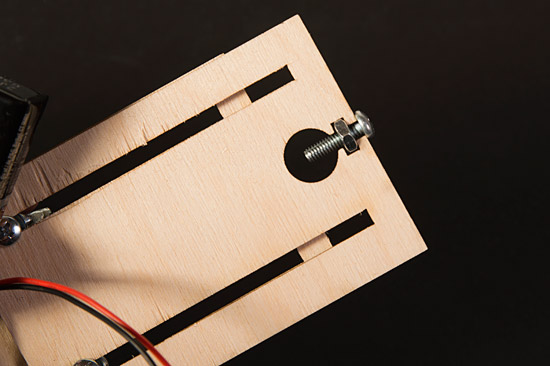 There’s a captive t-nut to hold the pen in place. It’s a good idea, but poorly executed here. 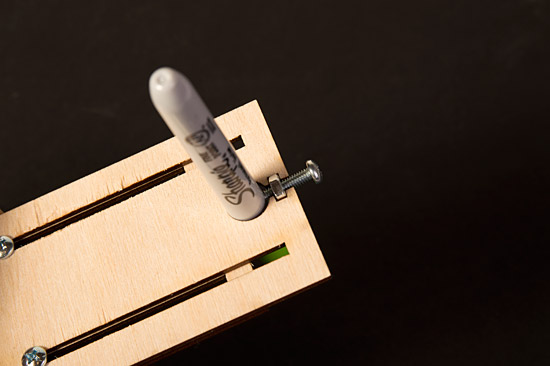 The screw does hold the pen, but again, the 3mm wood is a little thin for this to work well. It’s also difficult to tighten and loosen the screw without a screwdriver. I really need a screw that allows you to use your fingers, like the one on the Egg-Bot. I’ll probably make a 3D printed screw-thingy for this.

Detour! I often wonder/worry about mixing laser-cut stuff with 3D printed stuff, and I’m not sure why. Maybe it’s due to the recent kit design work I’ve been doing where we try to make everything laser cut, mainly due to speed and efficiency of production. In this case though, I’d see the 3D printed screw-thingy as an “enhanced” piece, so it should be totally fine. Or I could, you know, use a wing nut. (End Detour!) 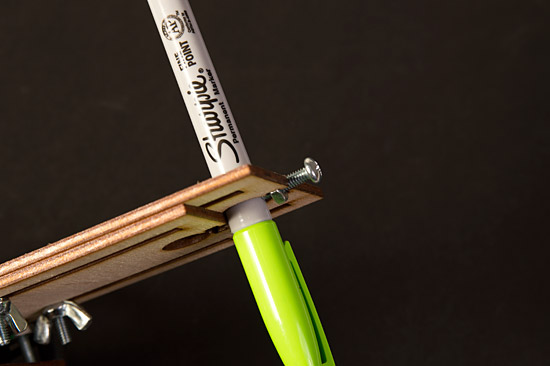 As mentioned, I find the 3mm wood a bit thin. This whole design is really just 2 dimensional, or maybe 2.5 dimensional if you want to stretch things a bit. I want to have the next iteration be much more 3 dimensional. I may stay with laser-cut wood for most of it, but there is a lot to explore in the design for assembly aspect of things. 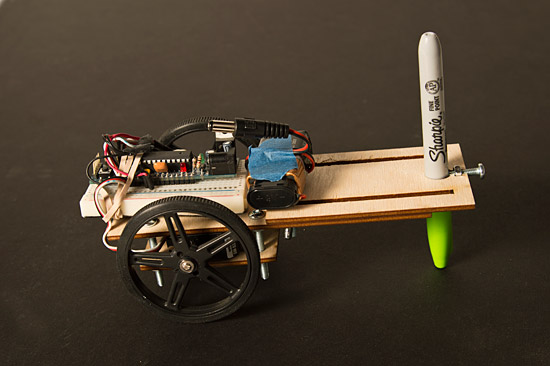 I may play more with this version, introducing minor improvements, or just move on to the next revision, which will be much more box-like, and move away from the flat plates.

Since I like to build things really fast, it’s hard to know what will happen next.