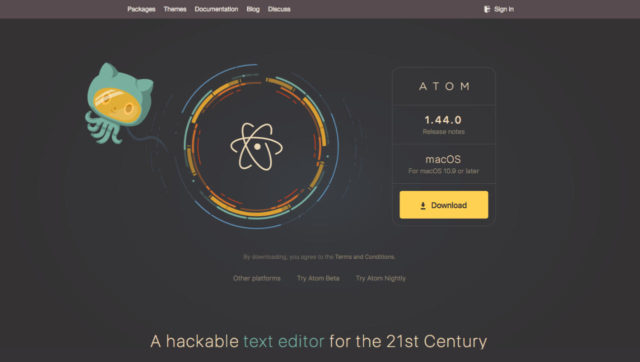 I started using BBEdit back in the 1990s and eventually moved to jEdit in the 2000s. Well, it’s 2020 now and since I tend to change text editors every ten years or so, I’m behind schedule! I’m pretty sure that in recent years I checked out Brackets, Sublime Text, and maybe even Atom, but I stuck with jEdit because I knew it, customized the heck out of it, and didn’t see a reason to switch.

For me, a text editor should be open source, run on macOS, Windows, and Linux, be extendable, customizable, and hackable, and… I should like using it. Life is too short to use a text editor you don’t like!

I’m working on a rather large project on GitHub right now, and I had to walk through the process of installing GitHub Desktop, and while I was jumping into the GitHub Desktop experience I figured I would also try out Atom since it integrates well with GitHub and GitHub Desktop.

When dealing with a new text editor it’s hard not to find faults. Part of it is that it’s new, and may do things differently than you are used to with your old text editor, or it may have missing features, or what appears to be missing features because it does things differently. It’s easy to take the stance of “What!? I can’t do X anymore!?” (Where X is some esoteric thing that you used to do.) It’s important to remember to take some time, investigate, dig in, and see what a new text editor offers.

There was a feature in jEdit that was really neat, but I think I used it maybe once or twice a year, and I could have achieved the same end result using another method. In Atom there’s a feature I’d never seen before, but once I understood it, it blew me away, and I was thankful it was there. I might not use it all the time, and yes, I could totally achieve the end result another way, but it’s nice to have new things.

I do miss macros and macro recording and playback in jEdit. Despite all the packages for Atom I’ve yet to find an equivalent. I have already written a really simple Atom package, so it’s good to know that’s an option if I can’t find some of the features I need. (Update: I did find some macro packages, just needed to be on a machine with dev tools to install them.)

Here are the packages I’ve added to my Atom install so far:

I’ve tried a few others, but haven’t added them to the lineup quite yet, but I’ll keep an eye out for new and useful packages. I’m also a fan of the command line integration and ability to customized the look of the editor by using CSS (though I wish there were more/better example files out there showing how to customized everything.)

So yeah, it’s safe to say at this point I’ll keep using Atom as my text editor, even though it will take some time to get used to the find & replace, and I’ve experienced a few crashes, supposedly can’t deal with large files, etc… I mean, the Command Palette is awesome. jEdit had a similar feature (I think?) but I never used it. I think one of the things I like about Atom (and I liked about jEdit) is that they were built by hackers for hackers. People who want to fiddle the bits and change things and make it their own.

The other important thing about a text editor is what you use it for. I will most likely not be using it as an IDE, though I may play around with integrating it into OpenSCAD or the Arduino IDE, I’m not doing large scale software development. I am mainly… working with text. Writing text, manipulating text, writing scripts, editing text files… stuff like that. It’s rare that I need autocomplete (in fact I disabled it) and some of the “coding” features just get in my way. YMMV depending on what you use a text editor for in your own work. 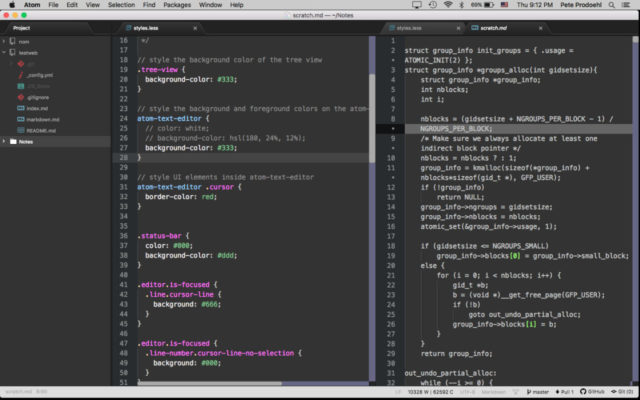