Quite a while ago I ordered a DVD drive for my old PowerMac G4, and after sitting in a box for roughly two months, I finally installed it. (It was the drive sitting in a box, not me.) 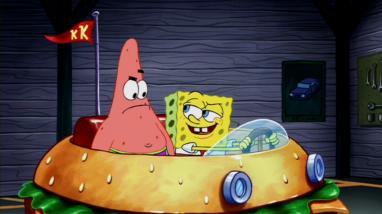 What’s that now? A screenshot of a DVD playing on my Mac? But how? I remember telling my cousin years ago that Apple’s DVD Player application prevented you from taking screenshots, but there were some 3rd-party apps that could probably do it. Much to my surprise, none was needed! I’m still using 10.3.x but the following worked for me:

And bango! A PDF on the desktop. It’s the whole screen, not just the DVD being displayed, but it’s a start… (I probably got the idea from macosxhints.com, as there are many other capture suggestions there as well.)

Well, I’m not sure what “a ton” is to Russell, but you can get Genuine Apple SuperDrives for what I think is a reasonable price…

Oh, and you can get along just fine using iMovie for videoblogging and never even burn a DVD… ;)