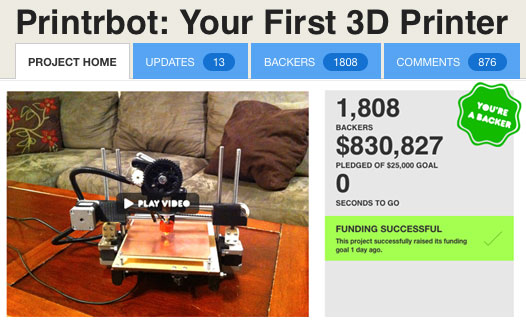 You’ve heard me say that 3D Printing is the Future, and I’ve talked about the MakerBot, RepRap, and other 3D printers, but fairly recently, a new project called “Printrbot” launched, and more specifically, they launched on Kickstarter, where their goal was to raise $25,000 and when the campaign ended they raised $830,827. (3,323% funded!)

And 3D printing moves fast! I received a MakerGear RepRap Prusa Mendel about a month and a half ago, and I’m still building it.

When I say “I’m still building it” I should clarify that I only get at most a few hours each week. I’ve been told you can assemble the entire thing in a weekend if you skip meals and sleep. :)

But supposedly the Printrbot can be assembled in an afternoon. And it’s smaller, and lighter, and cheaper. All good things. I’ve heard a few questions as to the speed, print quality, etc. of the Printrbot, but I’m fairly confident it’s well designed and will be comparable to the other 3D printers in it’s price class (even though it’s probably the cheapest right now.)

At Milwaukee Makerspace we’ve got a member with a MakerBot Cupcake, I’m building a Prusa Mendel, and I’ve heard that one member backed the Printrbot project and should have one of those when they’re available.

Oh, I should also mention that a goal of the Printrbot is “a printer in every home (and school)” so right there, I’m a fan… and a backer.

If you’ve ever thought 3D printing was too expensive, keep an eye on the Printrbot project, and see what they can do to change your mind.

I backed it too! March can’t come soon enough.