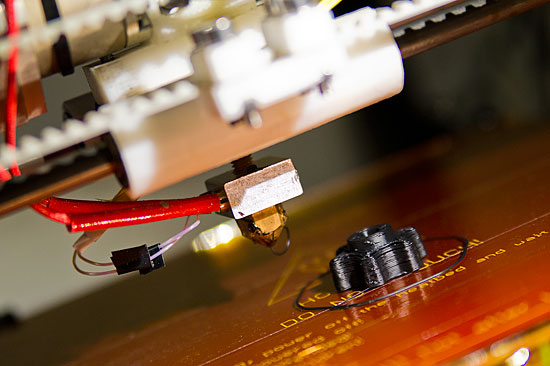 It’s been quite some time since the last RepRap Report. I guess 2013 was pretty smooth as far as 3D printing goes. But don’t worry, things went wrong eventually, so here’s another update.

I hit a problem with extruding, as in, filament would not extrude, which was a new thing for me. I know a lot of other people with printers, either at Milwaukee Makerspace, or through the Milwaukee 3D Printing Meetup, and I hear stories of extruder jams that require taking everything apart, torching the nozzle, soaking things in acetone, etc. I managed to go over 18 months with no issue. And then I had an issue.

Filament would not extrude. I raised the temperature, and still no luck. I moved the RepRap to a warmer room, and still no luck. It looked like the thermistor on the nozzle was a bit loose, so I reattached it. Still no luck. Finally I decided a teardown was in order. I pulled things apart, and eventually cleared out the barrel and the nozzle with some help from a torch and some acetone. I made sure I could see light through the nozzle. All good, right? I put things back together and was about to push some filament through when… the high temperature wire that was embedded in the ceramic broke off. That was the end of that!

There was pretty much no way to reattach it. I asked around online and people were like “You’re still using a MakerGear hot-end!?” And yeah, I was, because it just worked. For 18 months it worked fine. People kept telling me to get an all-metal hot-end from E3D, I didn’t feel like plunking down nearly $100 USD for one, especially since I assumed it was really just a new heating element I needed.

I ended up finding the MG Plus HotEnd on Thingiverse, and just ordered the Heater Block Assembly from the ebay shop of RP One Labs for about $20. I managed to do a minimal amount of damage getting it installed but… it worked! I was extruding again! (After I had to solder together the thermistor wires I accidentally sniped. Oops!) 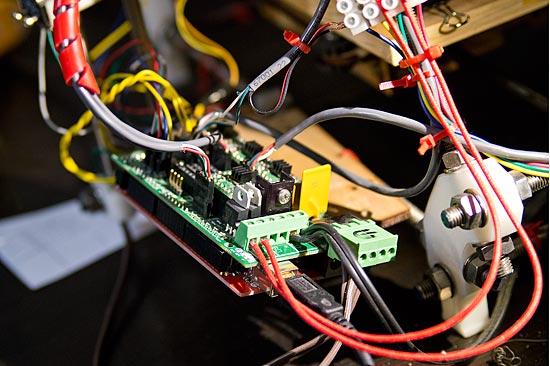 Once everything was back together in it’s proper place, I was ready to print, except that the z-axis then decided to have a mind of its own. Telling z to home made it go up. Then down. Then up. Then up and down. Hmmm. I ended up swapping the x and z axis Pololu drivers. The z axis was back to normal then. Test print. Hmmm. The x axis was missing steps, and I got the old problem of your entire print shifting to the left (or right) mid-print. A bit of Pololu pot adjusting and eventually all was good. (Come to think of it, it took a bit of adjust on the z axis driver as well. Things seem dialed in now, and I can print.)

The important thing is, I can print again. One of the reasons I leaned towards building my own printer was that I figured I would be familiar enough with the machine that I could easily repair it when the time came. That’s seemed to prove true so far.

I’ve spent the weekend calibrating things again. I’m still using Slic3r and Pronterface. I know there are lots of other (and newer) options out there, and I should explore them a bit, but for now, there are things to print!