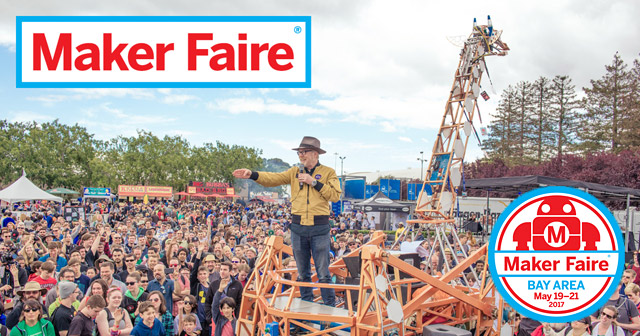 I’ve been to a lot of Maker Faires in the past five years, but it’s mainly been in the Midwest (Detroit, Kansas City, Madison, Fort Wayne, and of course, I help produce Maker Faire Milwaukee) though I did make it out to New York a few years ago, and Washington D.C. for the National Maker Faire last year…

But I’ve never been out to Maker Faire Bay Area… until now. Yes, friends, I’ll be out there this time around, and I hope to see you there.

I won’t be wearing my Maker Faire Producer hat though… This time around I’ll be working the booth for Brown Dog Gadgets, who just completed their (successful) Kickstarter Campaign for Crazy Circuits, which is a LEGO Compatible modular electronics platform. Yes, LEGO bricks and microcontrollers mixed together. Fun!

I’ve done a number of projects for Brown Dog Gadgets over the years, and while I didn’t have lot to do with the new Crazy Circuits project, I pitched in where I could with a few ideas and a bunch of code. It’ll be exciting to share the work with a large crowd! (And exhausting, from what I hear. Even though Maker Faire Milwaukee is the largest free Maker Faire in the U.S., the Bay Area crowd still has us beat!)

(I’m not sure if we’ll make it to #BringAHack or other fun events, so if you want to meet in person, look for the Brown Dog Gadgets booth.)