I should mention that the idea for this started maybe three years ago. I think it was during a meeting for Maker Faire at Milwaukee Makerspace and I tossed out the idea of building a giant light sculpture using light bulbs. Lance and Chris talked about it a bit and Tom started looking up parts on Alibaba. Nothing came of it that year, and I sort of forgot about it for a while. In fact, I really didn’t think about it again until after we completed the DecaLight last year. Once the two dimensional relay controlled light bulb thing was done I thought going three dimensional would be a good idea.

I modeled the cube in OpenSCAD, and then animated it just for fun. I figured out how many pieces of each PVC joint I would need, and while I originally thought a 20′ cube would be a good idea, after some initial tests (and the unavailability of 10′ PVC pipe) I ended up going with a 10′ cube so the 5′ PVC pipe I could get would work.

I picked up Jordan Bunker’s book PVC and Pipe Engineer: Put Together Cool, Easy, Maker-Friendly Stuff last year and then ended up learning about FORMUFIT which allows you to build furniture using PVC pipe. I had a plan! 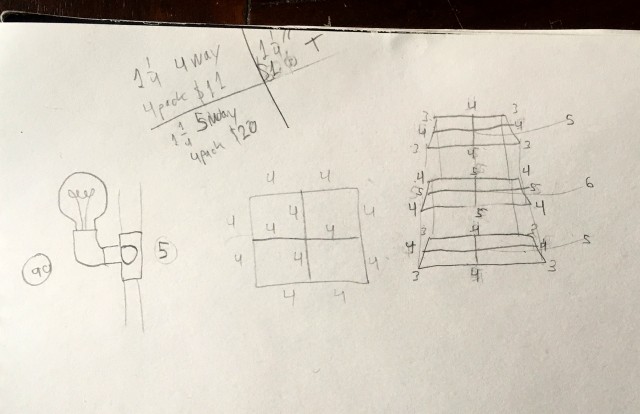 Here’s the first sketch of the Giant LED Cube. By now I had decided that I would use LED light bulbs and standard household lamp sockets. The nice thing about using such common parts is that they are very cheap. I found these Black Bakelite Fixture Socket with Terminals and ordered some so I could test the fit. It was close enough that it would work, and I just needed to make a small adapter. Well, at least 27 small adapters. 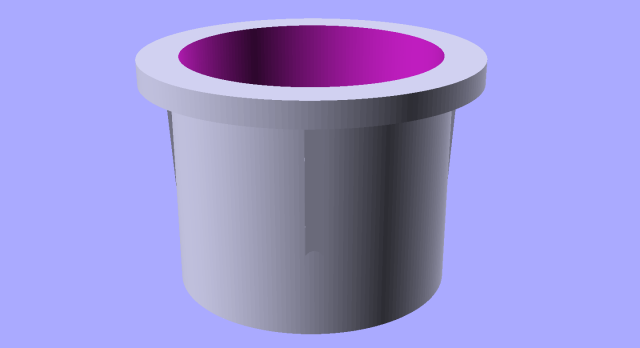 I designed and 3D printed over 30 of these using clear ABS, which is remarkably close to being white, and since you wouldn’t really see them, I was fine with the close match. I cranked these out so I’d be ready when they were needed. Like many parts of this project, they are just press fit into place. The entire thing was designed to be easily assembled and disassembled for making transport and storage an simple affair. 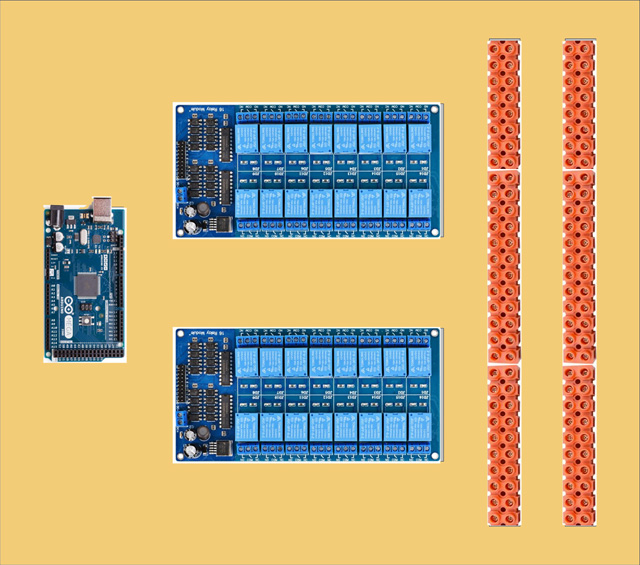 I had the basic design of the cube figured out, so I decided to work on the controller. Since we’d have 27 LED light bulbs I decided to use an Arduino Mega, which had plenty of I/O pins, along with two 16 channel relay boards. LED light bulbs are pretty lower power (compared to incandescent bulbs, anyway) so even though they’re 110 volts AC, 27 bulbs all on at the same time probably pulled less than 6 amps.

The image above represents my first attempt at layout out the controller, which I eventually abandoned. The screw terminals ended up not being a good idea. I would be pretty busy running Maker Faire so I assumed that I could find helpers able to strip wire, put them into the screw terminals, and get it all right. After attempting this myself on a small scale I decided that it needed to be even simpler, and clear enough that almost anyone could do the setup. So I scrapped the screw terminals. Around this time I also decided that running all of the power cords inside the PVC was going to be tedious and difficult, so with the decision to just run the cords on the outside (at least for this installation) I decided to just use standard household plugs. This would allow nearly anyone to just match up some numbers and plug things in. Simple wins!

The design process for the Giant LED Cube wasn’t too difficult. Doing this like this (designing, specifying parts, building, etc.) is pretty much my day job. The wiring was definitely tedious, and required at least one unexpected hour-long troubleshooting session due to a bad connection. I had a lot of help with the wiring of the lights from Adrian, and a lot of help with initial assembly from Becky. Without their help things would have taken me a lot longer. (Thank You!)

I think I’ve spewed enough about this project for one post (which I wanted to get out last month!) so I’ll end it here and get working on Part II ASAP.