There are also a ton of session ideas some which you might expect (Drupal, Microformats, Ruby on Rails) and some which sound just crazy (Remote Controlled Go Carts; if you’re not in control, you’re out of control, Democracy in Ancient Athens: Organization and Technology, Thermonuclear Fusion; a possible reactor design). Hmmm, I guess all the crazy ones have long titles. 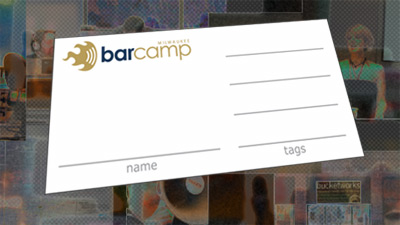 A few months back, my pals at Z2 Marketing gave me an old Mac, so my challenge became “what can I do with it?” You might remember such projects as MacKiosk which was a photo kiosk built using an old Apple Workgroup Server 80. Well, this is Kiosk2 , which is built using an old PowerComputing PowerCenter 150. Ten years ago this was a killer workstation, featuring a 150 MHz PowerPC 604 processor. Nowadays it’s almost useless…

A little MacPerl magic, a copy of the always exellent JPEGView, and an AppleScript applet to kick things into gear, and we’ve got our kiosk! So what about BarCampEarth? Well, I built this thing to use at BarCampMilwaukee, the idea being we set it up and as people upload and tag photos with "barcampmilwaukee" they will appear on the screen. So since this weekend is BarCampEarth, we decided to test it all using the tag "barcampearth"

So far it’s working ok. There is a weird flicker when the images load, so I’ll have to work on that, and in earlier testing I’ve had the Mac lock-up on me, but a reboot fixes that problem. Old hardware put to good use… hooray!