Managing my calendar is a problem I’ve been trying to solve for years. And no, I’m not willing to farm it out to a third party provider. If I was, this problem would have been solved long ago.

(For some background, see Calendar Woes, Calendar Woes (Part 2), Calendaring: Still not there…, and Events To Go. Or you could skip all that and just read this post.)

Just a bit of background, I’ve been hosting my own calendar on my home server for over 4 years, and it’s mostly worked. I used Lightning to make edits from any computer, since iCal didn’t have the ability to write to calendars stored using WebDAV. Like I said, it mostly worked. iCal (and iSync) was still needed to do the actual syncing to my phone. It was a pain, but it mostly worked.

When I moved to the iPhone, I thought my calendaring problems would be over since iTunes dealt with syncing all the calendar bits I needed. But I still had to actually sync my iPhone to my computer, using a cable, which seemed silly. I had sort of given up on having what I wanted, and thought this is how it should work… until I had a very brief discussion with Kevin where he wondered why I just didn’t use Google Calendar. After I rambled on like a madman for a few minutes, I was off to find a solution.

I found my solution… and it’s called DAViCal.

It just so happened that I got a new Ubuntu server up and running at the same time (courtesy of Kernel Design) and I figured giving DAViCal a try was worth a bit of effort, and a bit was all it took. I was quickly up and running with my own calendar, and able to add it to iCal, my iPhone, and Lightning, all with read/write privileges. The HOLY GRAIL of calendaring!

Now, DAViCal still has a way to go, but it’s GPL’d, and it works better than any other solution I tried, and it took minimal effort to get installed and configured. (I even got PostgreSQL up and running, which I never really used before.)

If you don’t like DAViCal, you could try Calendar and Contacts Server, which is also open source, and come from the Apple side of the world. It looks promising.

I know it’s dead simple to use Google Calendar or some other hosted service, but I’m one of those few people who like to have control over my data, and the backup of that data. My calendar is a personal thing, and I don’t really feel like handing that data over to someone else to take care of, and really, why should I? I know it’s the easy way out, but I’m not a fan of the easy way out, I’m a fan of freedom. The Internet is supposed to be this peer-to-peer thing with many choices, not rely on a few huge providers for everything.

Whew, what would a blog post be without a rant, eh? If you’re interested in calendaring, I recommend checking in with Calendar Swamp, which is all about the interop of the calendaring world. 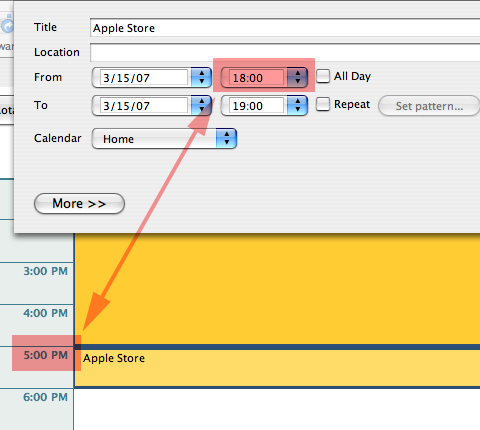