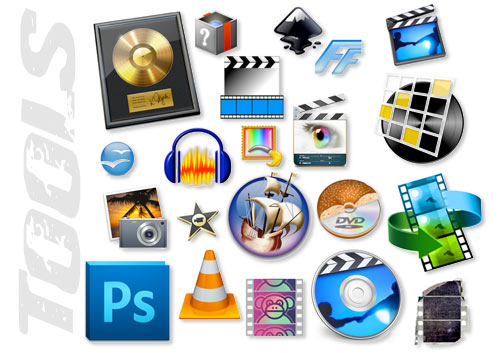 In the world of professional media making (and other things) it often pays to learn not just the One Tool™ but some of the alternatives… especially some of the free/open source alternatives.

In the world of video, there’s Final Cut Pro, which will often do 95% of what you need done with video, but when you need that extra 5%, that extra push over the cliff, there’s other applications to make that happen. Things like MPEG StreamClip, FFmpeg, and VLC have become extras in our toolbox that we’ve come to rely on. MPEG StreamClip is killer for getting things into the needed format, and if it can’t do it, I’ll move on to FFmpeg or perhaps VLC. They’ve all got their specialties.

Even things like iMovie (the most recent version, as well as the older version) are worth keeping around… Same goes with iDVD, which is usually a simple and fast option when all you need is a looping DVD. Photoshop? I love it…. but sometimes iPhoto is exactly what you need.

On the audio side of things, we tend to use Logic, but we’ve also got room for things like Audacity. What’s that? Need an 8 bit/8kHz mono WAV file for an antiquated phone system? I can kick that out in Audacity in 1/10th the time I’d figure out the settings in Logic. (And yes, that’s something I had to do last week.)

NeoOffice, OpenOffice, LibreOffice? I’ve used them all, and believe it or not, they all have subtle differences which maybe of use depending on the situation. (In fact the one I left out is Microsoft Office, because I don’t use it, but years ago, if you used a Mac and wanted to open the latest Word files from Windows, you could only do so with NeoOffice.)

So here’s my advice…. Learn the pro apps, and learn them well, but spend some time digging through the open source/free tools as well. Figure them out, what they are good at (and bad at) and keep them around for that special task that they excel at.

Have you got any favorite “lesser” apps that complement your “pro” apps? The Summit was on June 14, 2007, and I recapped in a post title Citizen Blogging Summit Report.

There is a very good chance that in a few years, those links will still work. There are links to this site that still work nearly 10 years after I first created them. There’s an old saying: Cool URIs don’t change. WTMJ 620 doesn’t get that.

When we were at the Summit, someone mentioned they were re-launching their site in the next few days. The second I heard this, I was pretty sure all the bloggers they invited, who actually linked to the Summit page, would have dead links within a week. I was right.

And there are links pointing there. I mean, we’re bloggers! You invite us to talk about something, and we will, by linking to it. Will I link to anything on 620wtmj.com again? I don’t know, since there is a good chance it’ll disappear with the next web site re-design.

I might just be a little sensitive about this issue because I’m in the middle of doing some URL re-writing for a site that just underwent a major rebuild. But really, is a permalink so much to ask for? Honestly, I’m pretty disappointed. Just when you think someone is starting to get it, they let you down.