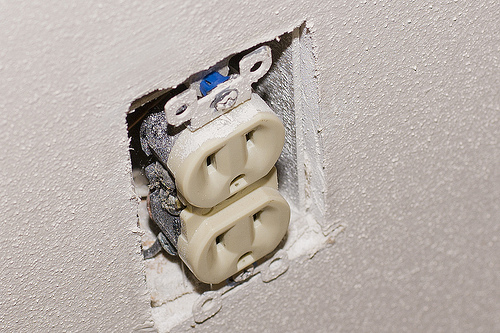 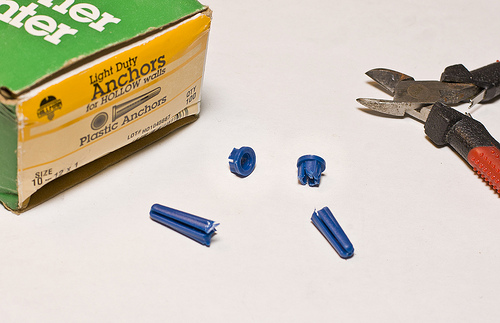 Since we’ve got a laser cutter at Milwaukee Makerspace, I wanted to test out the BoxMaker and cut a box out of wood. 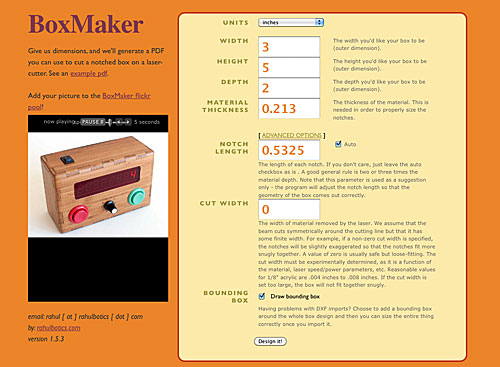 BoxMaker is a sweet little web app that lets you put in the dimensions and spits out a PDF file with what you need. I wanted a box 3″ x 5″ by 2″ and for the material thickness, I got out the digital calipers and took a measurement. (Take note of this! The material thickness is important later on…) 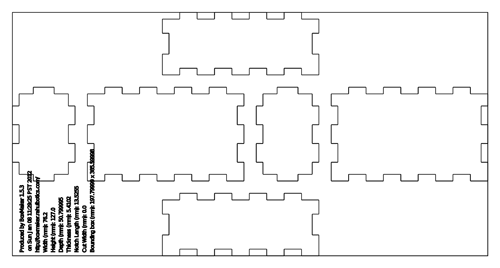 So here’s the PDF file I got. Depending on the size of your material (or how much you want to waste) it may make sense to move the pieces around. Since I imported the PDF file into CorewDraw (which is what the laser uses to cut things) it was fairly easy to rearrange the pieces. I also deleted the text that describes the box. I could have just made it a color the laser cutter ignores, but I figured I had the info in the original PDF file. 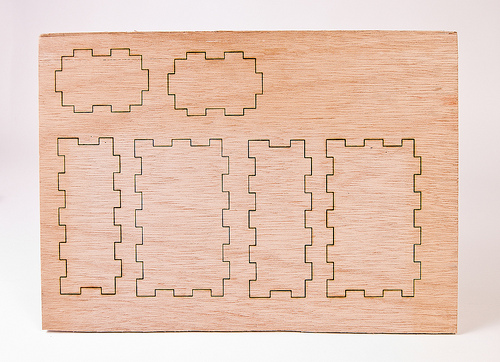 Now, our laser cutter is 25 watts, but since it’s old and may need some cleaning, it might not be outputting 25 watts, so when I put my thin piece of wood into the laser cutter, MattN mentioned that it wouldn’t cut it. I figured I’d give it a try, and yeah, even though I did multiple passes and tried to refocus the laser, it just couldn’t do it. I kept checking the depth of the cut, but it just wasn’t “cutting” it. (Pun intended!)

At this point I was fine with the failure to cut wood, and I knew the laser cutter could handle acrylic, so I grabbed a piece of that… 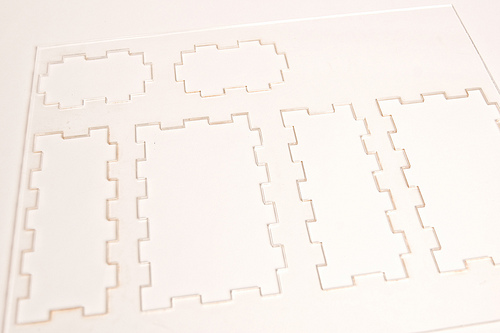 The laser got through the acrylic just fine, as it’s done before… but wait, what did I say about the material thickness before? I said you needed to measure it! Since the acrylic was thinner than the wood, I should have generated a new file, but I didn’t. So this is what I got… 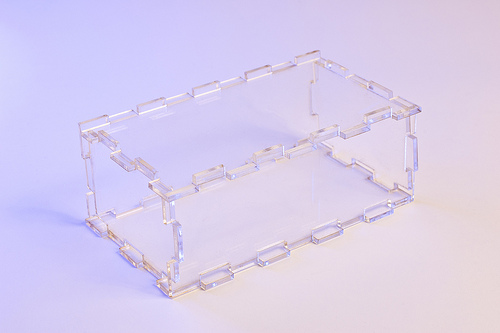 Here’s my box, with the tabs way too big, which gives it an interesting look I suppose. Not exactly what I was after, but at least I know that it works… mostly.

I also want to try a box with the T-joints like the MakerBot uses. Box-o-tron looks like it will work, if I can get it running. (Any other suggestions?)

Also, I had a fun time trying to photograph clear acrylic, so it wasn’t a total loss. :) 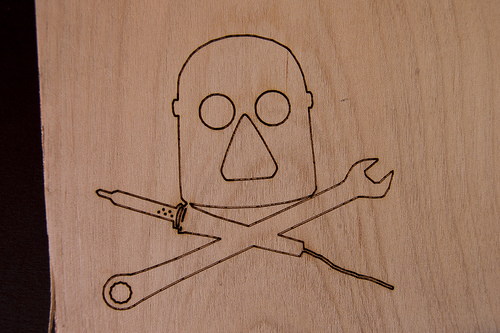 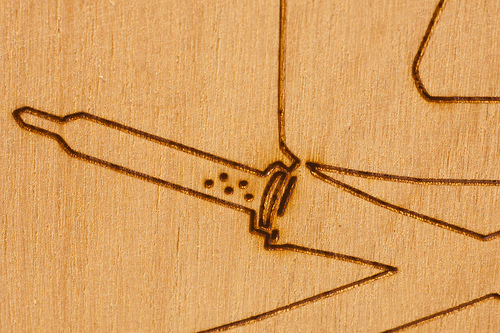 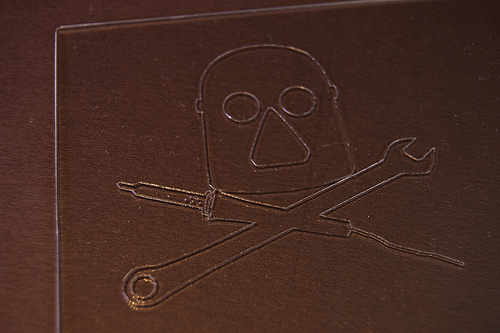 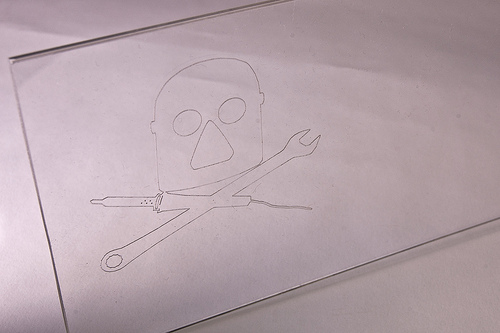 A year ago I saw a post on the Sector67 site that talked about upcycling the plastic from laundry jugs. After seeing the post I thought about how many of these jugs we end up tossing in the recycling bin, and if there were any ways I could make good use of them. 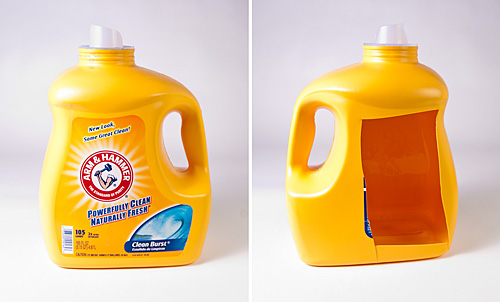 Here’s a typical laundry jug, and as you can see I cut out a nice (mostly) flat piece from the side. 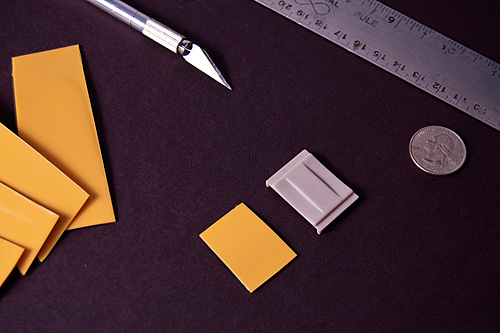 Cutting the plastic with an X-ACTO blade

I wanted to cut a small piece into a rectangle to match a missing piece from a window blind, and using an X-ACTO knife and steel ruler are the perfect choice for such things.

(Somehow we’ve lost/misplaced these window blind parts, or they weren’t here when we moved in. I thought briefly about 3D printing a replacement, but cutting a piece from plastic I’ve already got seemed like a better option.) 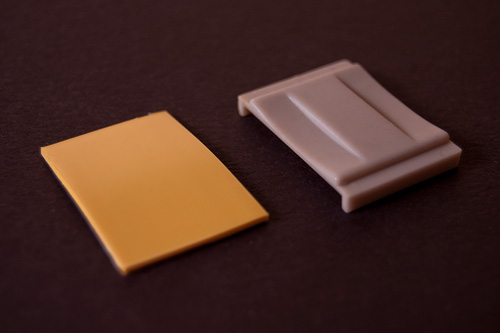 My replacement is not an exact match, but I’ve cut it a bit taller to provide some friction so it will stay in place. For the simple purpose it will serve, it should do just fine.

Here’s the original piece, and my replacement piece. Both are holding the blinds into the bracket reasonably well.

I’ll often just cut out the flat sides of laundry jugs and keep them in a stack and then recycle the rest of the jug. They’re handy to have around when you need one.

We’ve talked about building an injection molding machine at Milwaukee Makerspace (Mold-o-rama anyone?) so if that happens, I may have a few more uses for these plastic jugs. 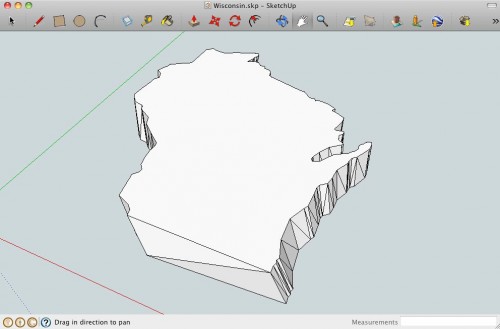 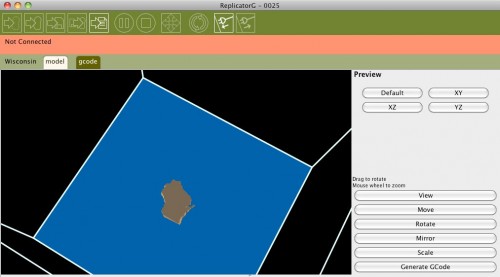 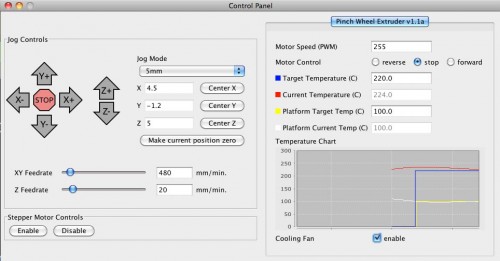