We had a great demo at the Milwaukee Makerspace last week when Drew demoed his MakerBot Cupcake, and if you don’t know by now, the MakerBot is an affordable 3D printer that squirts out hot plastic based on 3D design files you feed it. If you’re not much of a 3D designer, you can browse Thingiverse for some good stuff. 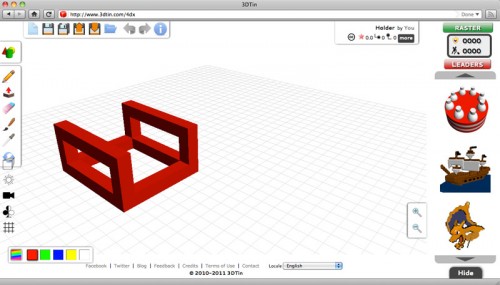 Our old pal Pehr was also there, and he brought his MakerBot too, and when we were talking about 3D design software he said “Just go to 3DTin.com” and then we did…

The interface was a bit confusing at first, though admittedly I’ve never been able to get very far with 3D software. I did manage to design this thing I’ve called a holder. 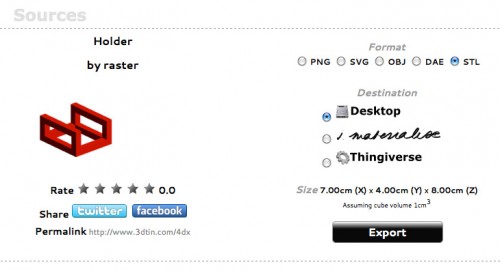 Once I was done with the design, I was able to export it as an .stl file to my desktop. (There are other export options as well.)

3DTin itself is a simple to use 3D design application that runs completely in a browser. You can use it for free, or for $4.99 you can pay for the “premium” version, which gives you a few more features and hides the ads. I can see playing with this a bit more, or even having the kids give it a try. Meanwhile, I still need to dig into tools like Sketchup, or maybe Blender. 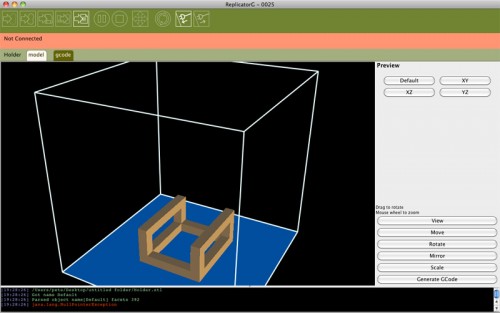 After exporting an .stl file, I loaded it into ReplicatorG to take a look at it. Once in ReplicatorG you can scale, rotate, and move the object as desired. Once I had it centered and scaled properly, I saved the file to an SD card and handed it to Drew to stick into the MakerBot. (As I understand it, you can also just print directly to the MakerBot via USB cable.) Holder (fresh from the MakerBot)

Once the holder was complete, it looked like this. You can see the strands still in place left from the printing process. These are from the print head moving between the two sides. Here’s what the holder looked like after I trimmed off the strands with an X-ACTO knife. This is obviously a simple object, but so far the process of designing it and printing it was well under an hour. Here’s a close up showing the strands from printing. Commercial 3D printer have much higher resolution, so you don’t really see these lines in the objects they create. Supposedly the MakerBot can be tweaked to run slower for better resolution, but for many purposes, this is still good, and pretty darn impressive.

I’ve got some idea for other things I’d like to design, but for now, you can grab this Holder from 3DTin, and while I had no clue what it would be good for when I designed it, it does seem to work to hold an iPhone in landscape mode, or even as a business card holder.

Big thanks to Drew for the demo and the help in getting started on the MakerBot. I can’t wait to get some serious time with it at the Makerspace.

Oh, it sounds like we’ll also have some good 3D printer action at BarCampMilwaukee6 if you want to come and check it out.

5 replies on “A MakerBot Adventure”

I was reading my rss feeds this morning, and suddenly I saw something that familiar!
If your looking for a bunch of random makerbot and reprap stuff checkout the Planet Reprap rss feed.

I’m really trying to secure funds for a printer before barcamp, not sure if that is going to happen yet.

Yeah, I plan to buy most the stuff from Joe Kerman over at Sector67. He is working on a business around selling reprap parts and stuff. The reprap should be cheaper, the thing-o-matic is selling for $1300 currently. I’m hoping to build a reprap for less than half that. I also feel like there is more room of innovation around the reprap as its less of a defined kit.

I see the RepRap as more of a tinkerers tool, where there may be more tweaking needed, and in the end you’ll know a lot more about it (just like any kit) and I see the MakerBot as more of a tool to get started with 3D printing quicker… Sort of like Linux versus Mac OS X, maybe? :)

Agreed. I think in general the reprap gets me closer to other personal goals like I want to also build a small cnc machine. Dealing with the stepper motors and learning about them before I attempt to scratch build a machine could be very useful.