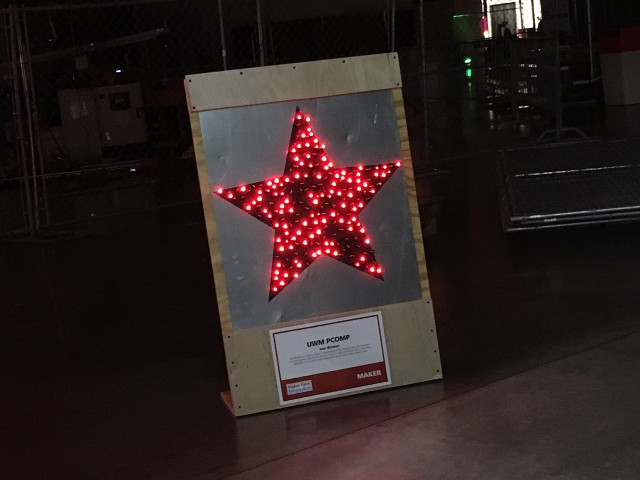 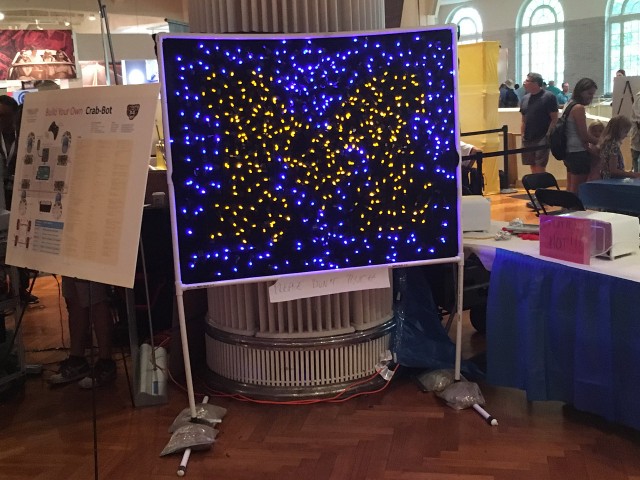 The inspiration came from something Kathy and I saw at Maker Faire Detroit. After seeing the “M” at the Henry Ford I remembered I had left over batteries, LEDs, and binder clips from the Learn to Solder kits I made for the Zoom Symposium at UWM.

I thought that since I had the leftover parts because of a UWM connection, I should find a way to get UWM involved again, so I persuaded my Physical Computing class to help. (And by “persuaded”, I mean I bribed my students into helping me with assembly of the piece.) 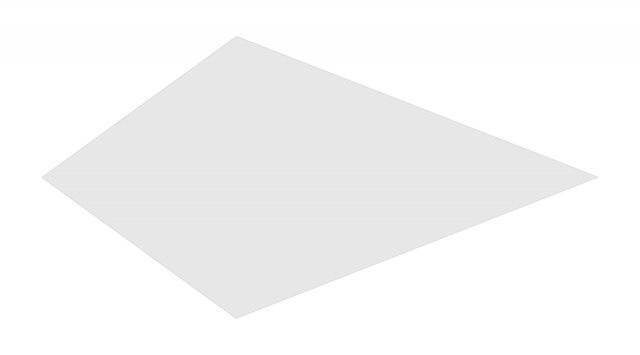 I didn’t have a piece of posterboard large enough to make the star I wanted, so I make five segments that could be assembled into a star. 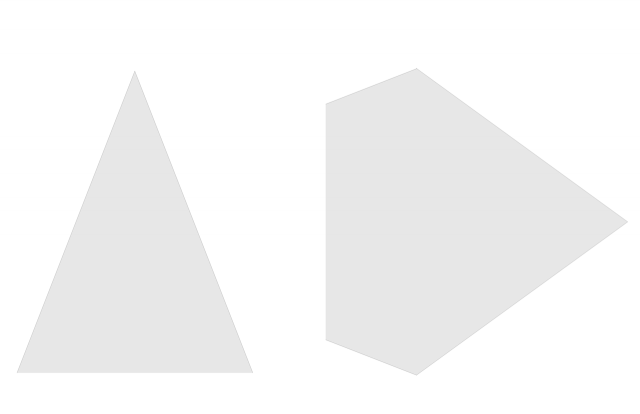 Since I don’t have a printer capable of tabloid printing, I split the pieces into halves and printed on letter paper. Some assembly was required. 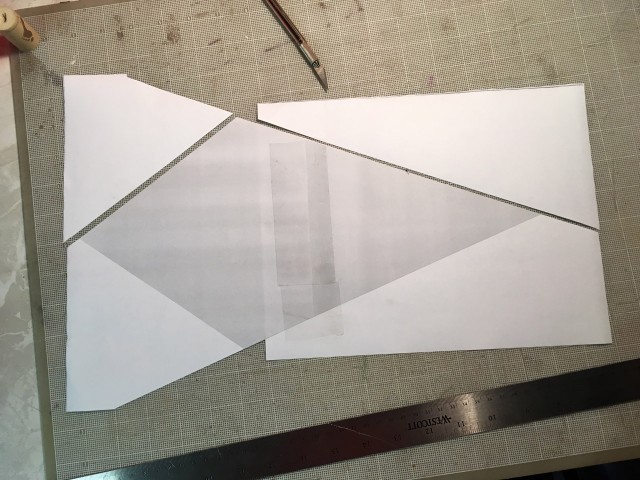 I cut the pieces and taped them together, and then had the “star legs” I needed. I then used it to cut the black posterboard using an X-ACTO knife and cork-backed steel edge ruler on a cutting mat. (Sorry, no laser!) 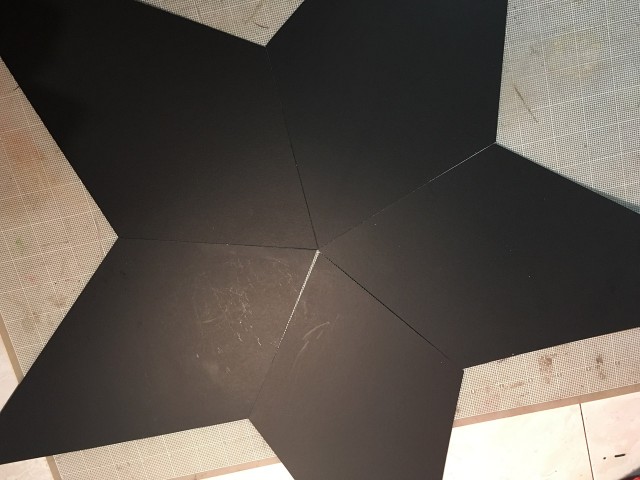 And yes… things didn’t fit right. Again, no laser. I trimmed edges a bit until things fit together right and it was deemed “good enough”. 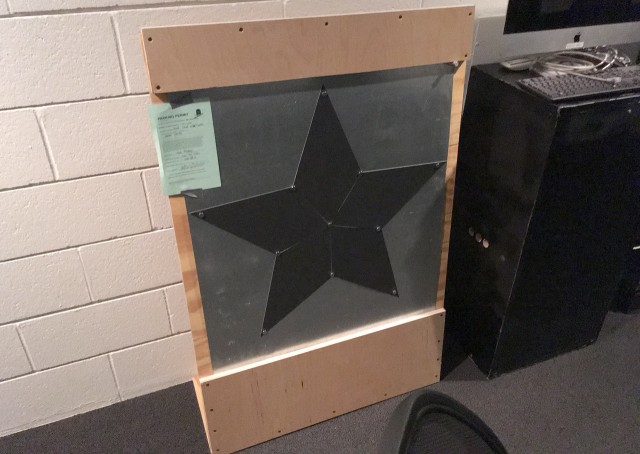 I took the star pieces to Kenilworth and attached them to the piece of sheet metal with some magnets. At this point, I had to wait until the Thursday night right before Maker Faire, which luckily enough, is when I have class! I brought in some bags of candy, and while I taught students in groups of two or three how to solder, the rest of them assembled everything… 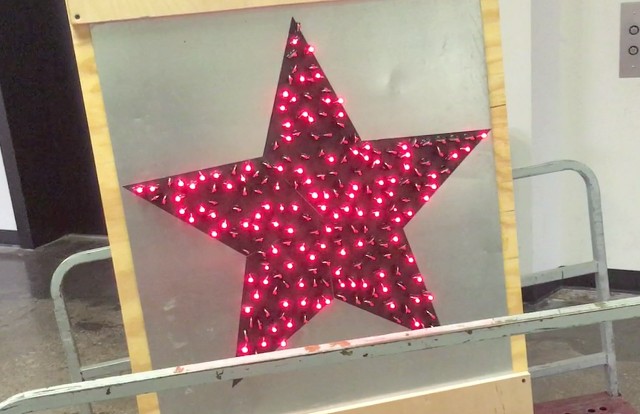 200+ pieces of black construction paper were cut for insulation, 200+ batteries were opened and had 200+ LEDs stuck onto them, 200+ binder clips had the clippy parts removed, and 200+ magnets were attached and then placed on the sheet metal. Things go fast with so many people helping!

Here’s the first test with the lights out, which we did during the DECODE meeting. It was impressive!

I then had to get Star-Blinken from the fifth floor of Kenilworth to my car, which was fun, because the Milwaukee Film event was setting up and Kenilworth was a bit crowded. The stand is heavy to prevent tipping, so I needed a cart. Also, since there’s no on/off switch, it blinks all the time. No control! 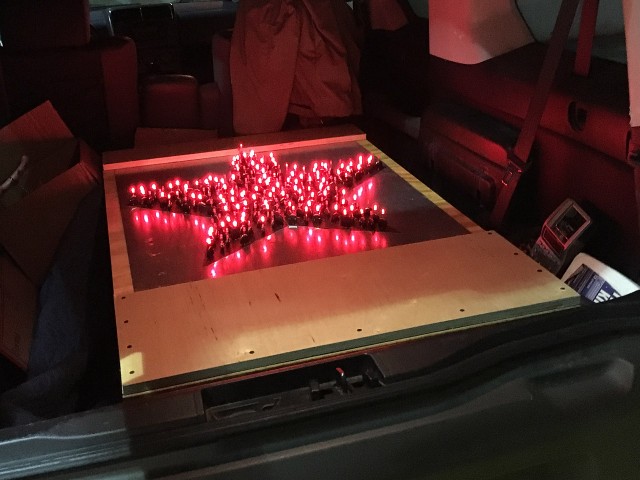 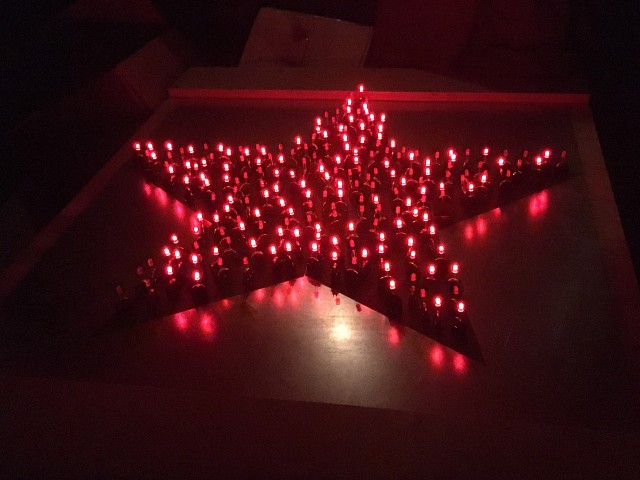 I loaded Star-Blinken into my car and yeah, it just kept on blinking! It was a fun ride home. It kept blinking strong all night long in the garage and then I unloaded it the next morning at Maker Faire. I ended up placing in at the entrance of the Dark Room, mainly because there weren’t other things there, but I think being in a darker area may have been even better. (I was a bit busy producing the event to worry about a better placement.)

Dana helped disassemble Star-Blinken at the Expo Center, and I asked her to just drop all the pieces into a box. After I loaded everything out and took it home, I forgot which box it was in and opening the box gave me a pleasant surprise. I then spent over an hour putting all the binder clips back together, and taking apart all the pieces.

The cost of this piece was approximately $100, and about $36 of that was for the batteries, which are the only parts that cannot be reused. (Well, actually, some of them have life left in them! Some did die though. None are at full power anymore.)

So I can reuse all the parts, except for the batteries, either in a similar piece in the future, or in the Learn to Solder kit. I may return the sheet metal to Tom from Milwaukee Makerspace, and the wood was disposed of. (The wood cost $0.00 as it was all scrap, and I reclaimed all the screws.)