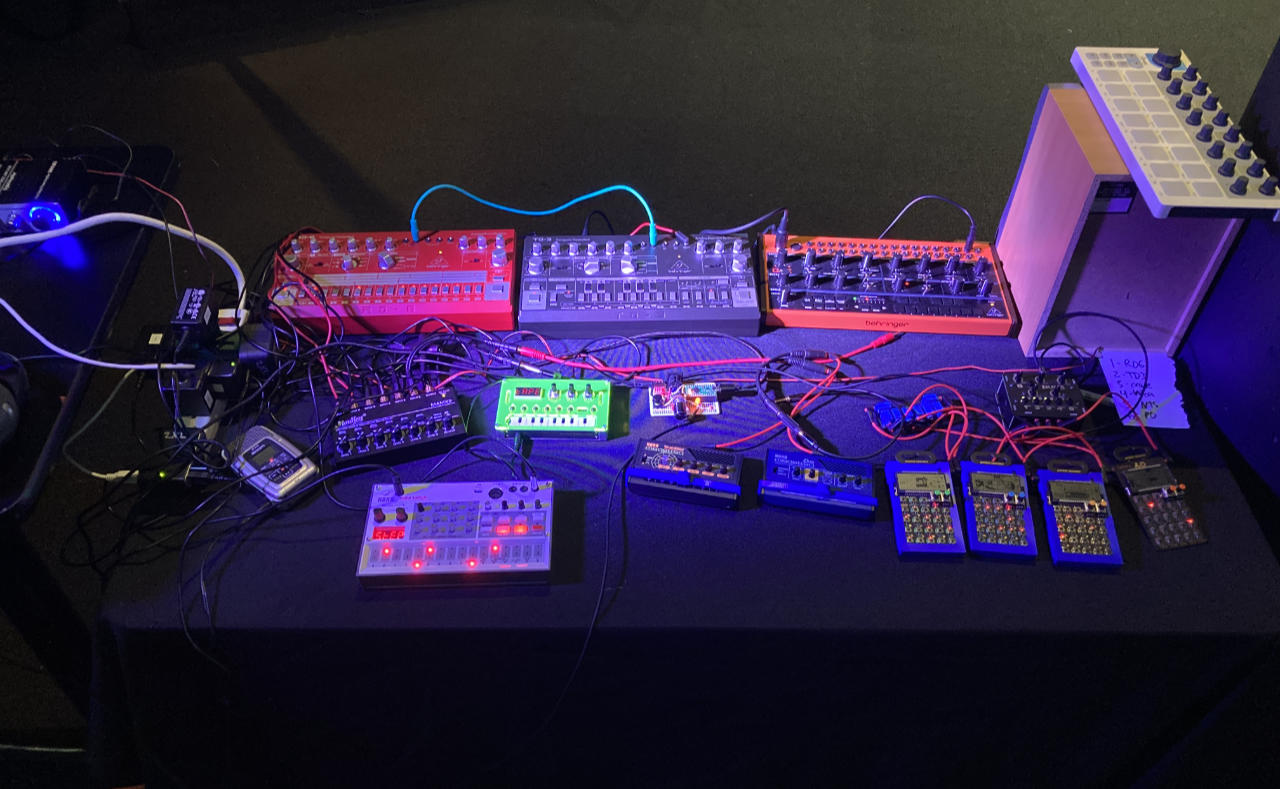 For Maker Faire Milwaukee this year I was not a producer, crew, volunteer, or even a Maker… I signed up as a “Performer” and asked to be placed in the Dark Room where I could make synth & drum noise as much as I wanted to. I signed up under the moniker NoiseMaster 3000 which I used (along with Maks and Dustin) back in 2017.

Now, originally MFMKE was supposed to be at State Fair Park again, and in the past the Dark Room was filled with all sorts of crazy things. Noisy things, light up things, weird things, etc. So I figured I would fit right in. (Note: Back when I was a producer I would get local modular synth people to come and make noise in the Dark Room. I figured this time it was my turn.)

Well, the venue changed to Discovery World, and I was told there would still be a Dark Room. And… there was. Sort of. It wad a theater, and the only other exhibit was Mark’s Sand Table, Arrakis. (And that was a last minute addition!) So it was really just me… in the Dark Room… alone.

It was fine. The second day Matt convinced me to bring Overhead Makey (one of my most successful exhibits) and I did, and it was grand. I also realized the Dark Room used to be full of stuff because I’d add at least a half dozen exhibits to it in the old days!

Anyway, I’m here today to talk about the setup, so let’s get to it!

I mentioned to someone that I’ve never taken all of this stuff out of my house before, and I’ve never actually connected it all together at once. Saturday was okay, but after screwing around with things all day I wanted to change a few things, so at the end of Saturday I ripped everything apart to reconnect it frsh Sunday morning.

What you see in the photo is what I had set up on Sunday when the Faire opened, and it pretty much remained that way all day. If Saturday was about figuring things out, then by Sunday I had things pretty well figured out. 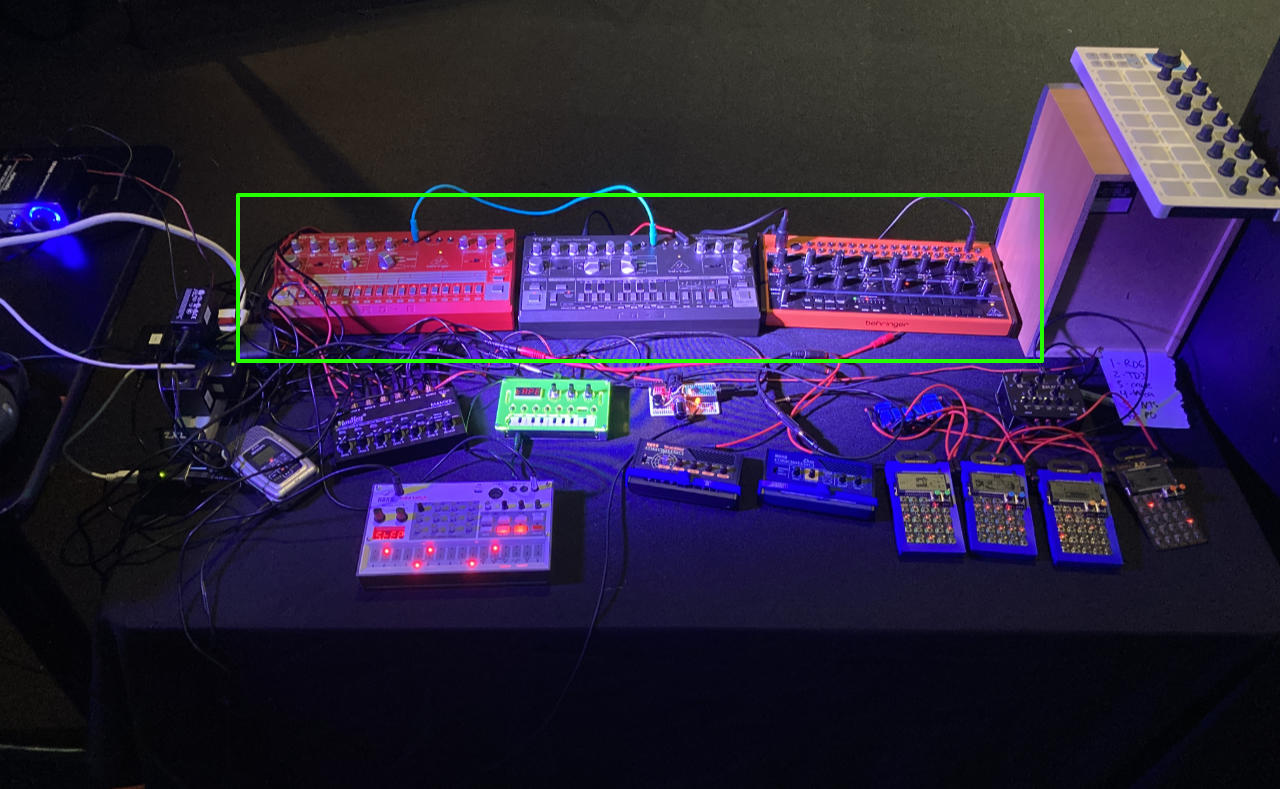 In the photo above you’ll see the Behringer RD-6 Drum Machine, the Behringer TD-3 Bass Synthesizer, and the Behringer Crave Analog Synth. I sync’d these three together with the RD-6 setting the tempo. The RD-6 can very much be played/tweaked on the fly while it’s running, but the TD-3 not so much. I basically chose between patterns I had created and stored in the past. The Crave was connected to the TD-3 via MIDI so it was getting notes from the TD-3. That worked out fine since the Crave is all about twiddling those knobs to adjust the sounds coming out of it. And twiddle I did. I also invited others to twiddle.

Those three each had their own channel on the mixer. This made it easy to isolate then to explain to people which was making which sound, and I could set it to just output one of them, then show how that one worked. 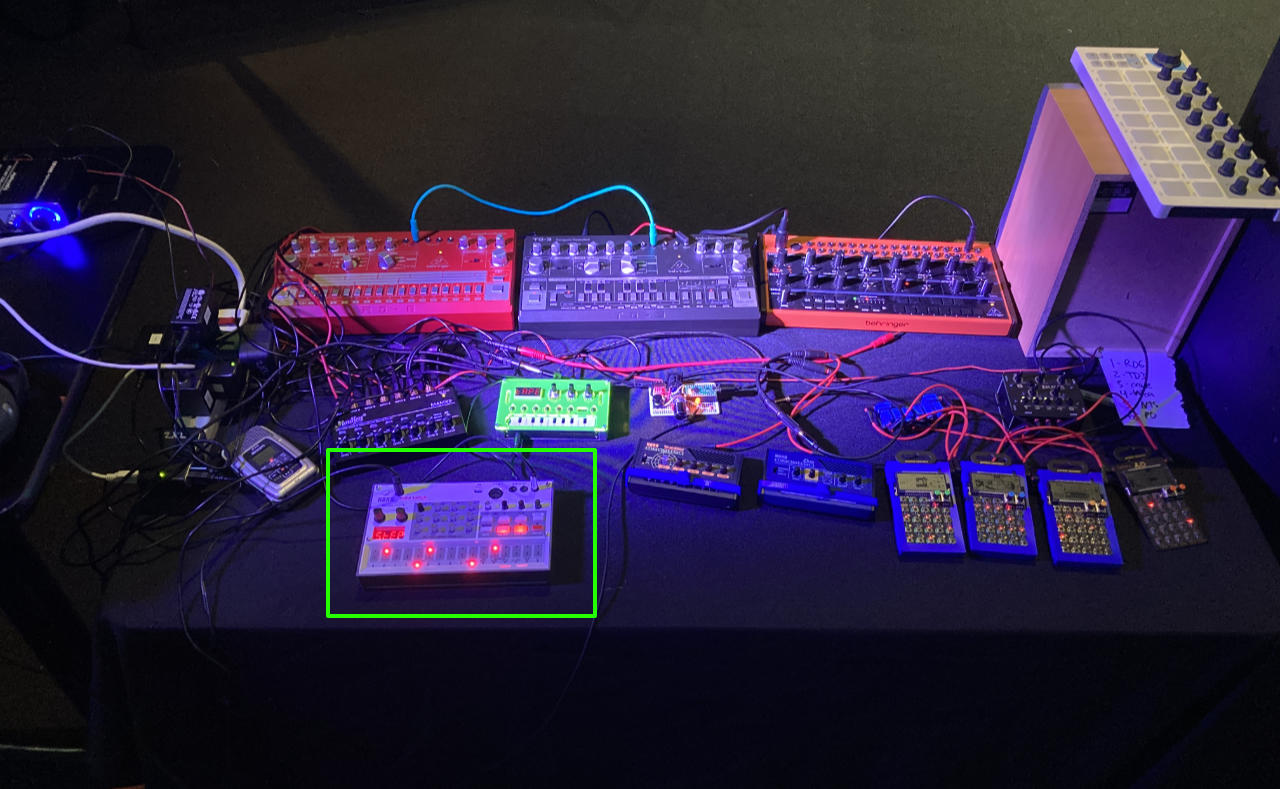 Next up is the Korg Volca Sample 2, which was on mixer channel 4. (Note: The first day I did not have a cheat sheet to tell me what was on what channel, and mistakes were made.) Since the Sample is sort of a “budget groovebox” it can do quite a bit all on its own. I think on Saturday I had it sync’d to the RD-6for a bit, but honestly having it separate was a good idea because I could have a totally different thing going on with it, and it was my “Second Setup” after the Behringer Trio above. The Sample 2 is definitely a thing that you can play live and perform with. In fact, that’s pretty much the only way I use it now, to build up a beat over time, slowly adding to it, and playing live by knob twiddling and button pressing. 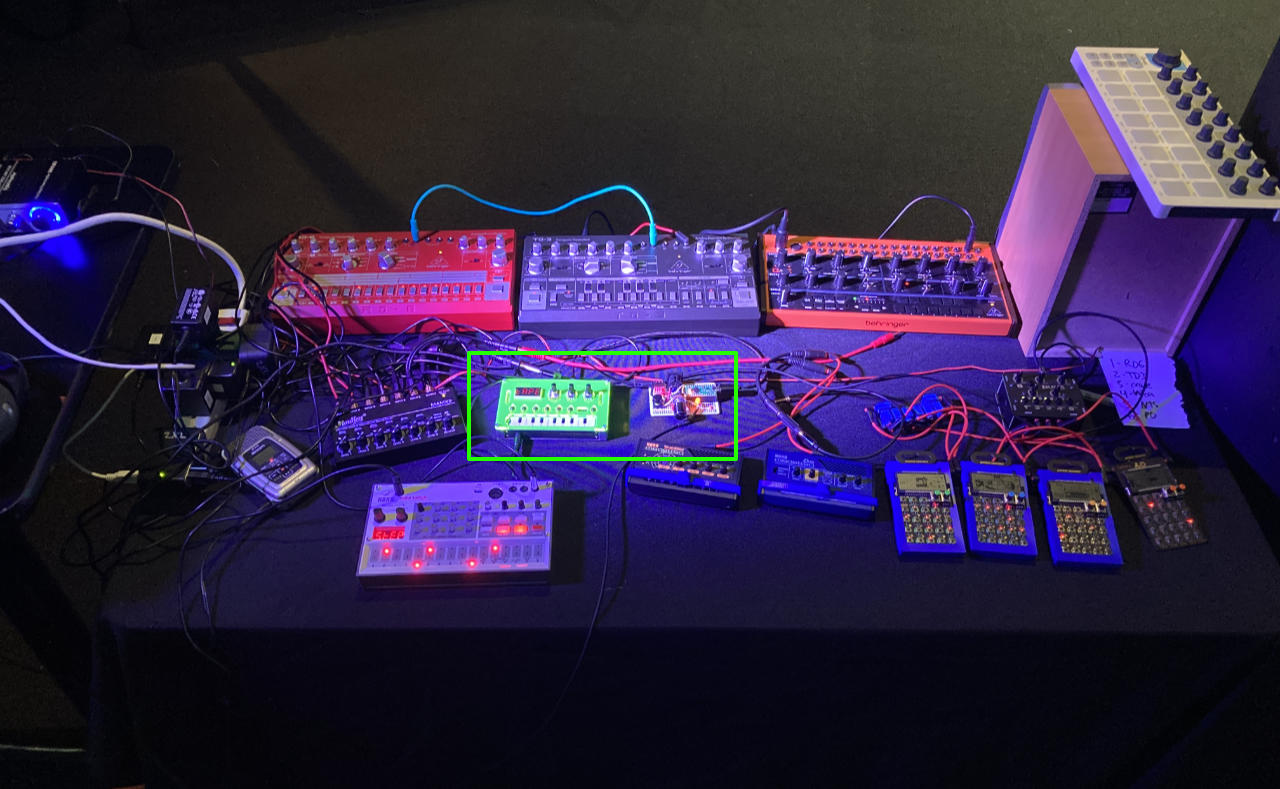 We’ve got the Korg NTS-1 which is a fine little digital synth and effects box. I connected up a small device I made that generates 16 step patterns and then sends them out via MIDI. So basically this was running spacey sounds and every now and then I would generate a new pattern. I tend to mess with the effects and add chorus, flanger, delay, and other weird stuff.Sometimes I would run this on top of other things, like the output of the Behringer Trio, other times I would just run it on its own. 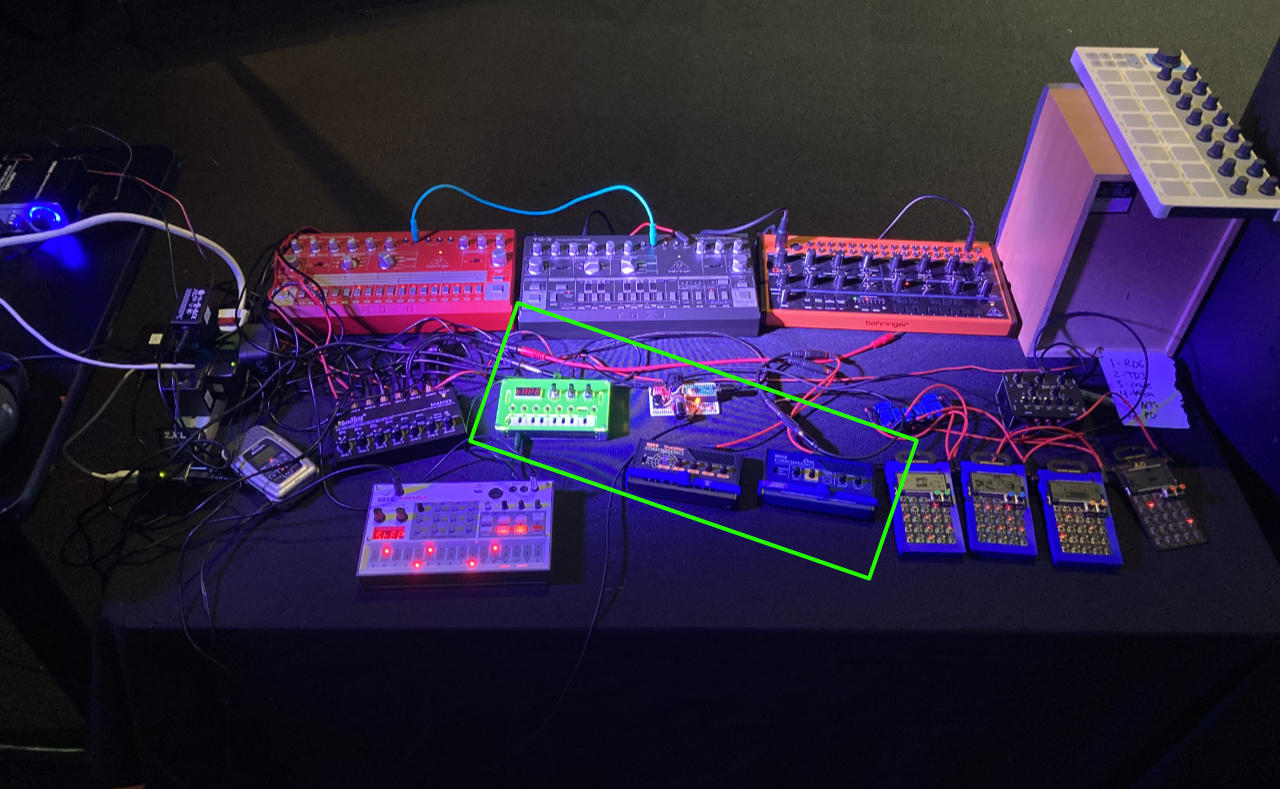 I forgot to mention the Monotrons! The Korg Montron Delay and the Korg Monotron Duo fed into a splitter (in reverse, so a combiner I guess) and joined in with the NTS-1. To be honest I didn’t mess with the Monotrons too much. They are fun, and the Delay is a nice little effects box, but I guess I just focused on the NTS-1 more. 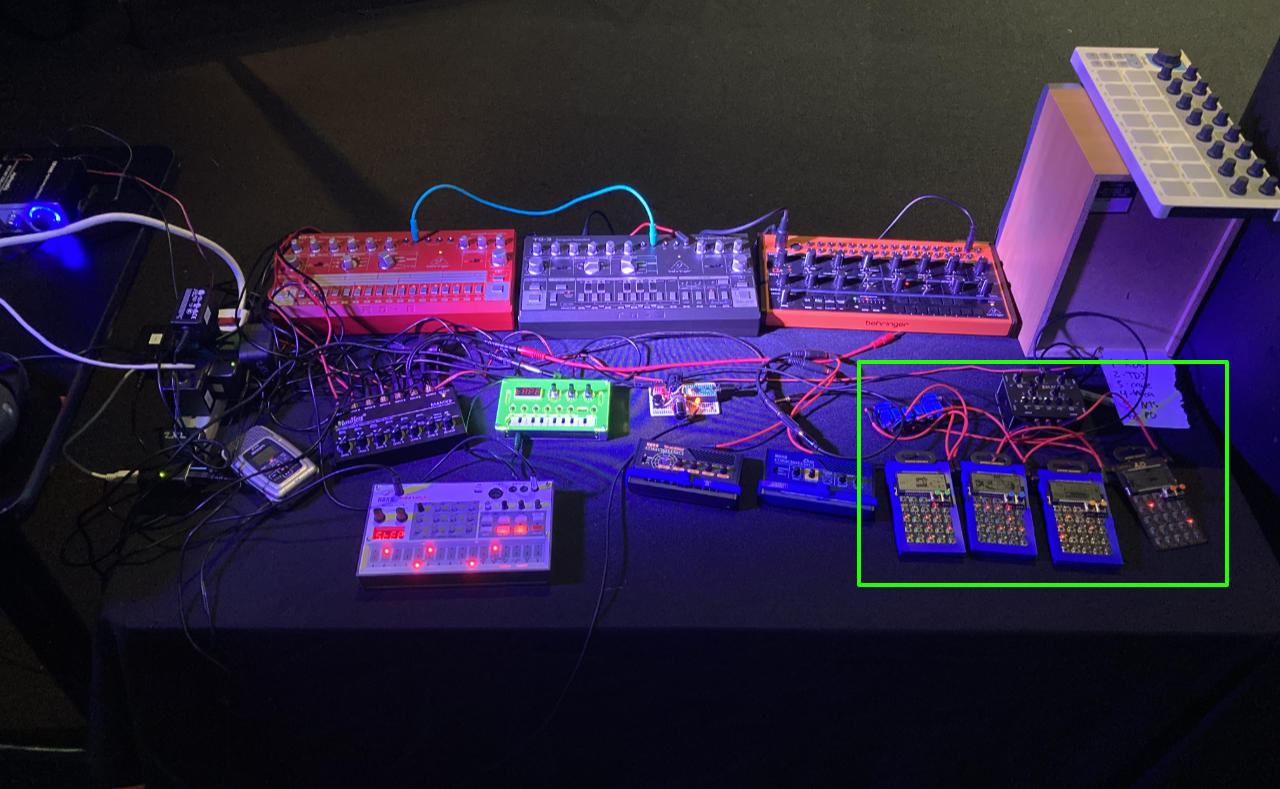 We’ve got the Pocket Operator Crew in the lower right corner. Those feed into a Bastl Dude mixer, which I love using with the PO gear so I can do punk-in/punch-out and adjust levels individually. I pretty much just ran four sixteen step patterns on the drums and then messed around with the bass, office, and factory live. (Note on the Factory, I need to make a 3.3v power supply because batteries suck in that thing and constantly die. Rechargeables do not work, and Alkalines do not last.) 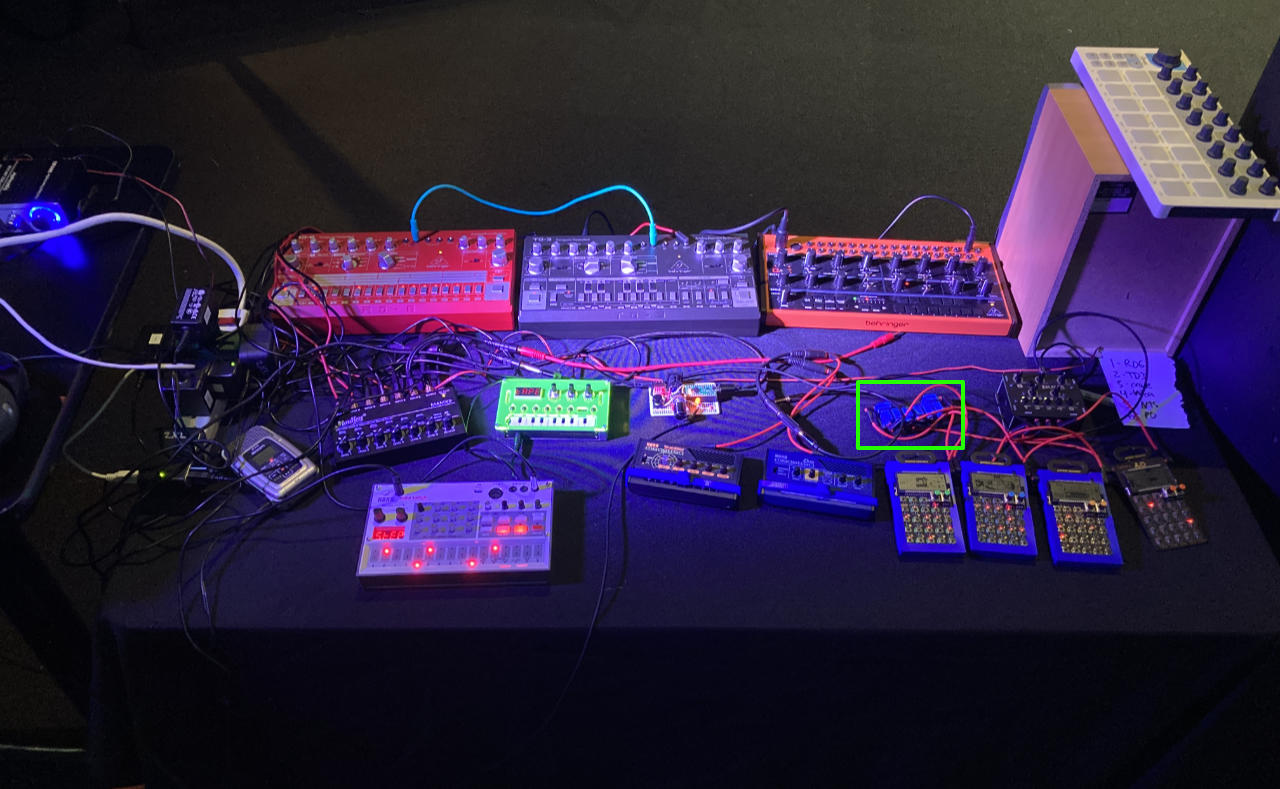 All of the Pocket Operators use a Sync Splitter so I can plug each output into the Dude mixer. I’ve explained the Sync Splitter before… 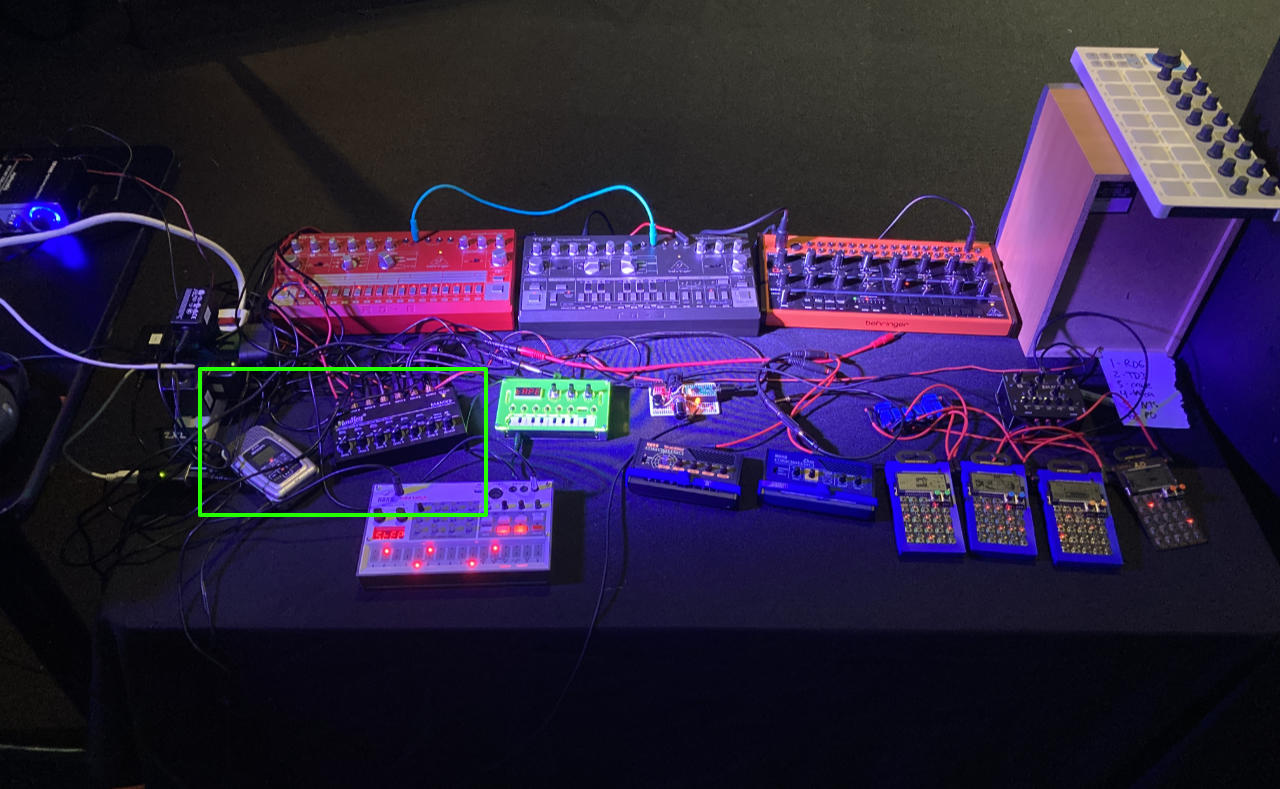 Here’s a Moukey 6 channel mixer that everything ran into. I then had a splitter coming out of it so I could run to the amp and to my headphones, and to the old Zoom recorder I had to record everything. (Yeah, I’ve got over 10 hours of audio!) I wasn’t able to lower the input to the Zoom on the Zoom so I set the output from the mixer to a good level and then adjusted the master output volume on the amp. (Note: There is an 8 channel Moukey mixer. I should consider getting one of those for the additional two channels.) 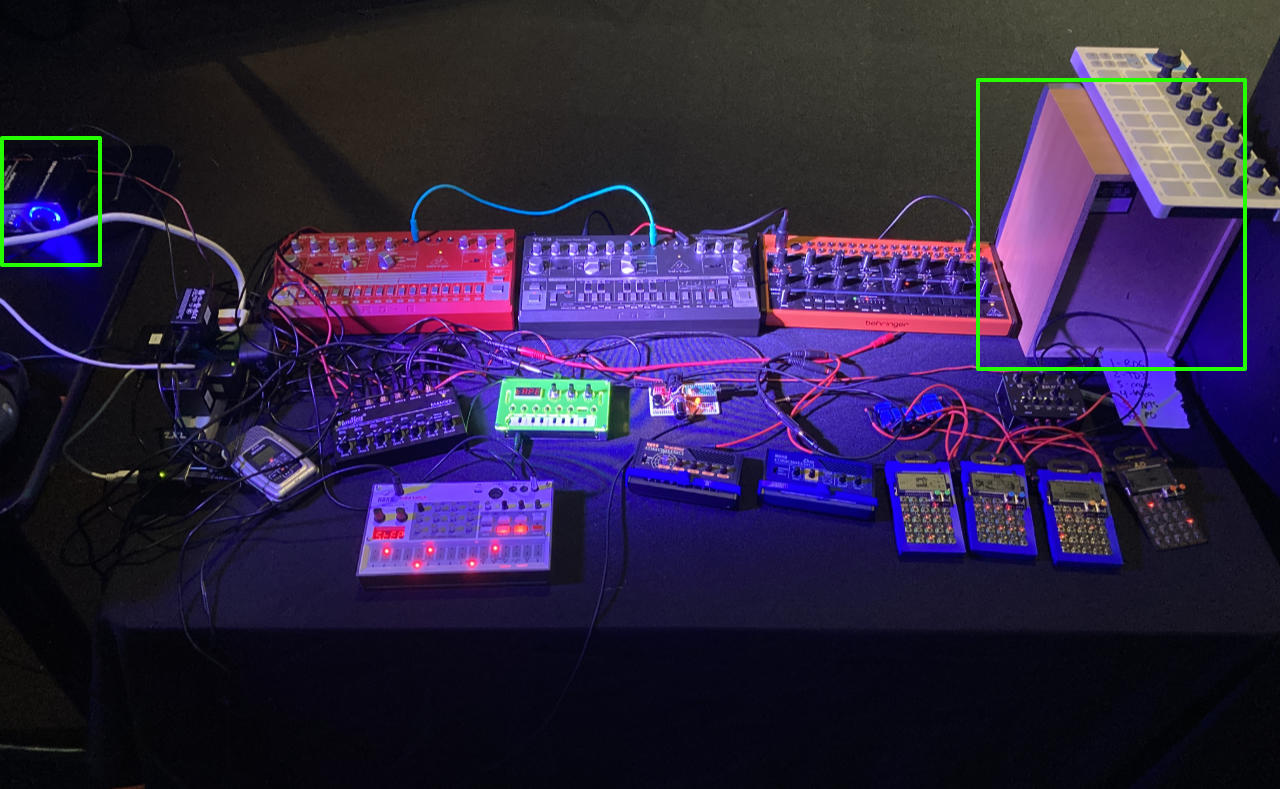 Speaking of the amp (if you can call it that!) I used an old car amplifier I had lying around, paired with some old stereo speakers that had been sitting in the basement for years. Everything is mono so stereo is a bit of a misnomer here. This setup worked pretty well. I didn’t need to be super-loud but could get plenty loud for the quiet theater I performed in. Oh, I managed to fit all of my gear into a suitcase and the speakers took up half the space! 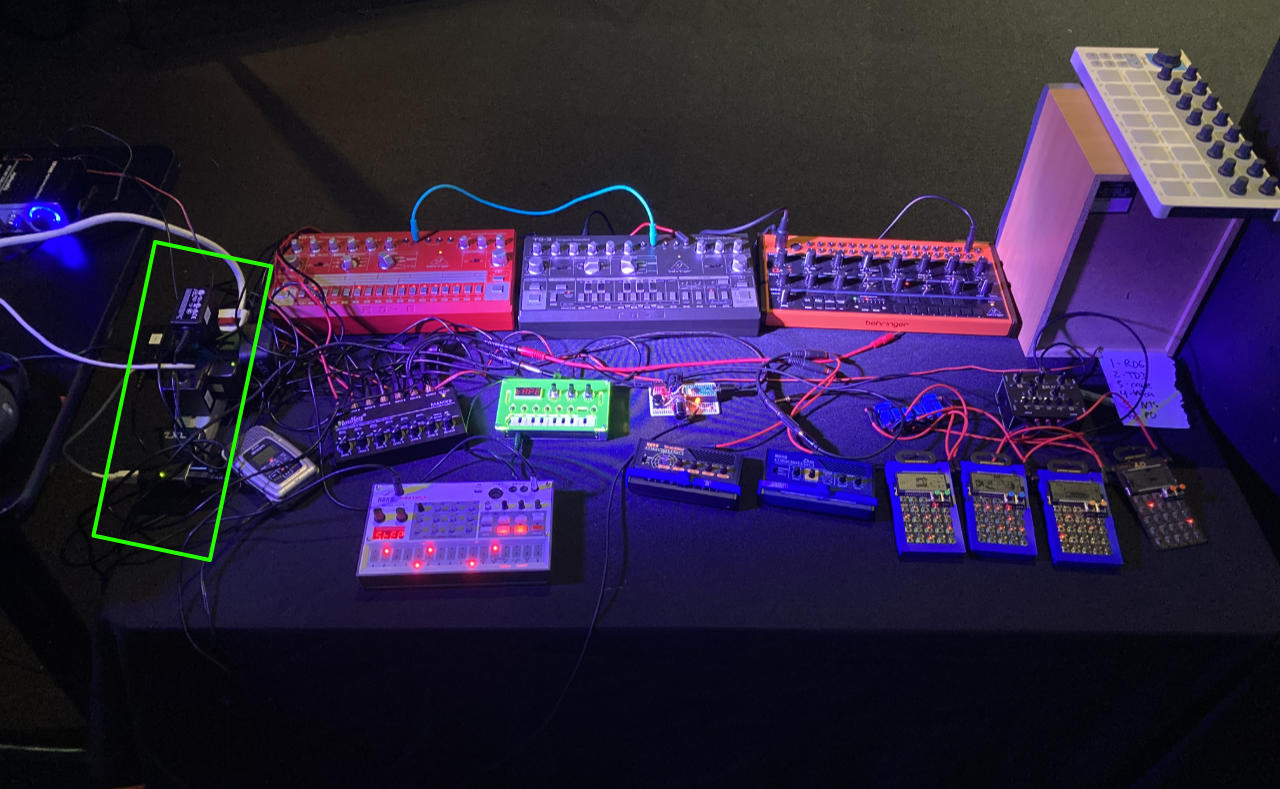 You can’t run all this gear with a lot of POWER!!! Just kidding, I do have a lot of wall warts but I was probably pulling well under 5 amps, maybe under 3 amps. (And all the Pocket Operators and the Dude were battery powered. I did plug in the Volca, though it could have run find on batteries) It’s a bit of a mess, of course, and there’s another power strip out of view for the light, battery chargers, and one synth. 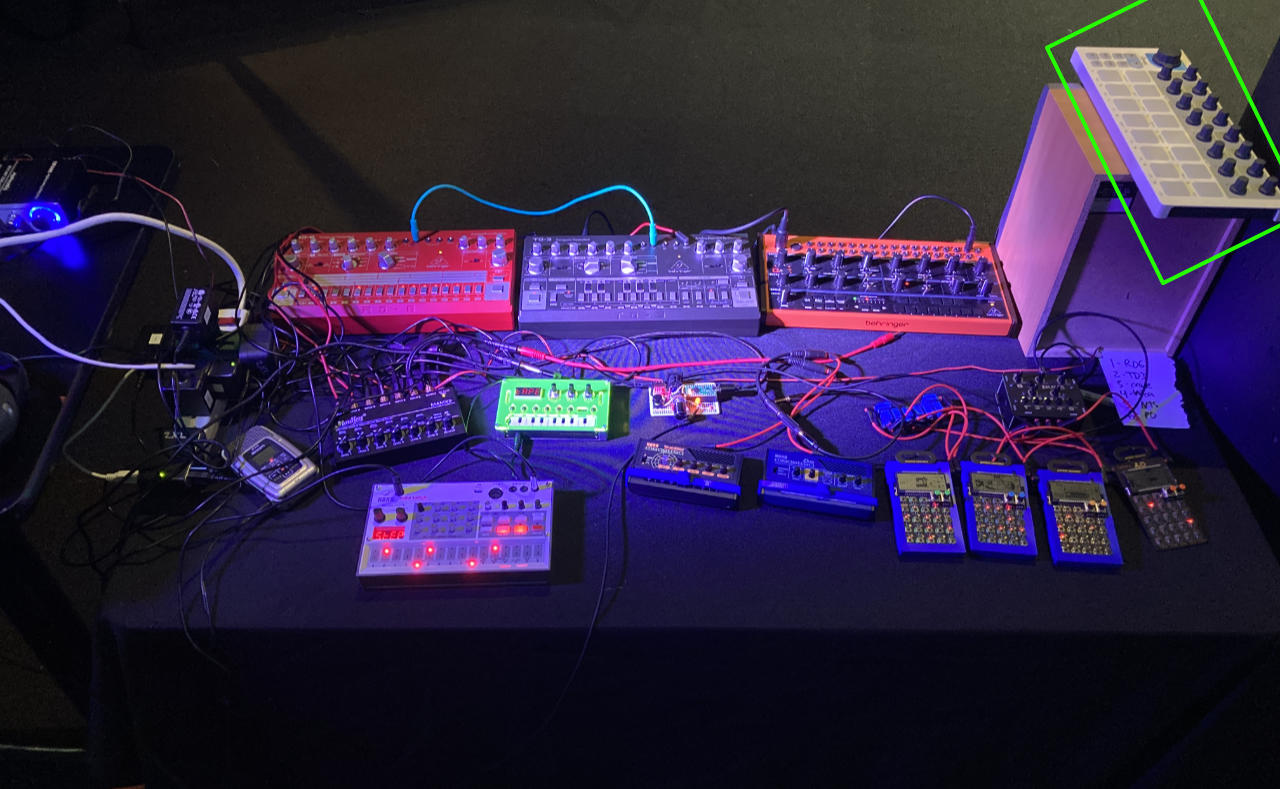 I did bring the Arturia BeatStep and tried to use it a bit on Saturday but by Sunday I just put it to the side. I sort of ran out of room and I didn’t get it connected in a way I liked. I may need to make note of how some things get connected for the future. I do like the BeatStep for screwing around, as demonstrated in this video. 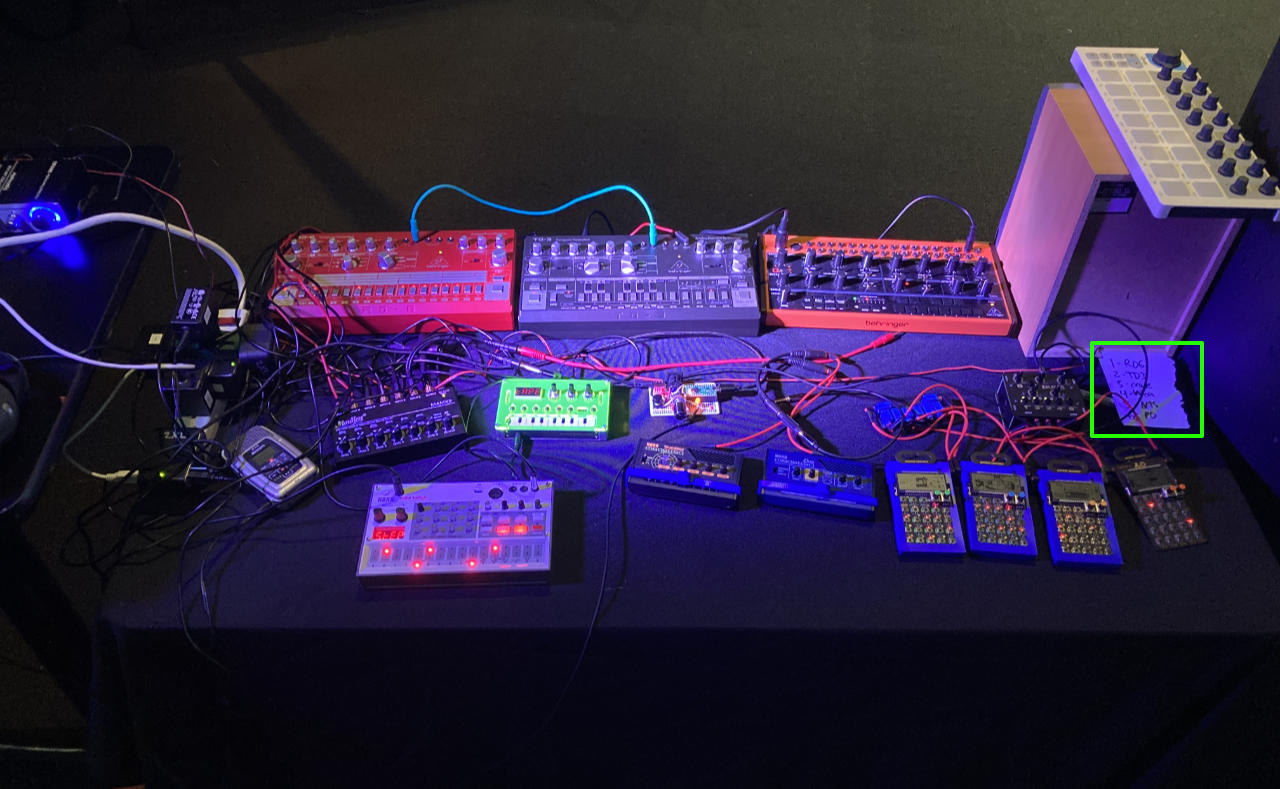 Finally, there was a small scrap of paper to remind me what devices were on what channels of the mixer. With all this gear, I got confused a few times on Saturday, so the cheat sheet worked well. I basically had four sequences running at once and could switch between them which made things a lot of fun. If I ever do this again (?!?!?) I’d probably do something very similar.

Okay, I hope you enjoyed this (very) lengthy write-up about my set-up. As I mentioned this is my first time doing this, and overall I pleased with how it went. It was a super-low pressure gig where I could just have a good time. Cheers!