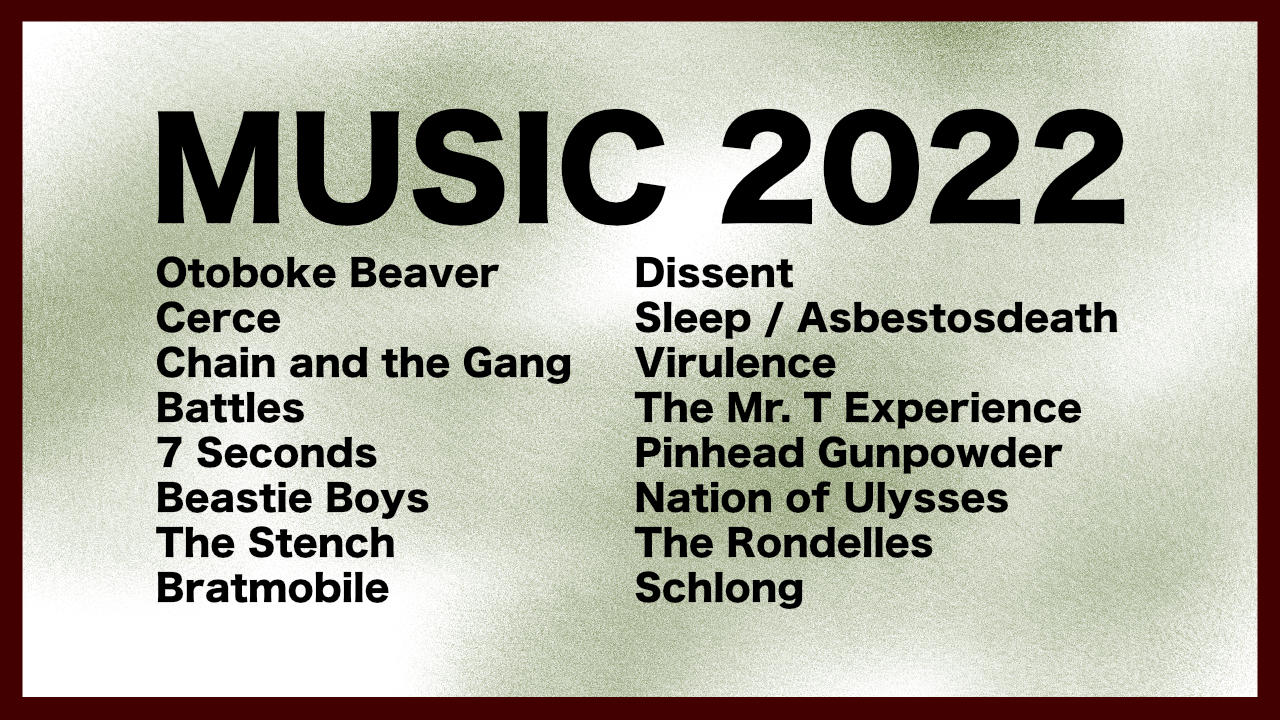 Here’s my top 16 of 2022. These may not have got the most listens but whatever. It’s a list made by a human to be shared with other humans. It is in no particular order, and I will detail each one below.

Otoboke Beaver
This is a punk rock band from Kyoto, Japan consisting of four women who play fast and noisy and it sounds amazing. They are one of those bands where if someone said “Who do they sound like?” you probably could not answer the question. Their album “Super Champon” came out earlier this year and it’s damn good, as is “Itekoma Hits”. Can I understand everything they are saying? No. Does it matter? Nope. Check things out on Bandcamp.

Cerce
I found Cerce on Bandcamp when I came across their “Cowboy Music” album, and despite the name and the cover art, I gave it a listen and damn… if this isn’t the sort of brutal hardcore I was listening to 30 years ago, but more refined, and with amazing female vocals. Sheesh! Great lyrical content, talented musicians, and an all around great thrash/hardcore sound. Their album is cheap and their 2011-2013 discography is even cheaper. Find it over on Bandcamp.

Chain and The Gang
I’ve been a fan of Ian Svenonius since the NOU days (See below). Chain and The Gang plays a weird style of rock ‘n roll with clever and often humorous lyrics. I really can’t think of another band that compares to them, at least not one that doesn’t have Ian in it. They’ve got a great catalog of releases, all just a little different but still similar enough to sound like it comes from one band. Check out their stuff on Bandcamp or dig around YouTube for some tunes.

Battles
I had heard some Battles stuff before, which I stumbled upon while digging into Don Caballero, but this time I went deeper into Battles and found some amazing stuff. They’re another weird group, they started as a four piece, then became a three piece, now it’s just Ian and John doing everything. Well, Ian does guitars, keyboards, and other sounds and John just does drums. But “just” isn’t fair because damn, that man is one hell of a drummer! I’m not typically a fan of what is called progressive rock, but some of their stuff blows my socks off. Check out Battles on Bandcamp or dig through their YouTube content, and their videos are also visually amazing.

7 Seconds
The one, the only… 7 Seconds. Do I love all of their stuff? No. But the stuff I love? I love. Walk Together, Rock Together, Take It Back, Take It On, Take It Over!, and even New Wind. Fun fact: 7 Seconds is one of the first shows I ever went to, back in 1986 at Cafe Voltaire in Milwaukee. Somehow they’ve stuck with me all these years (on and off) and honestly I don’t know if I can think of a band that’s lasted as long as they have and held up their integrity. Check out 7 Seconds on YouTube.

Beastie Boys
Just classic. What more do I say? So many good albums. I don’t love them all, but I listen to most of them. Innovative, hilarious, good music. My take on the Beastie Boys is that while they took their work seriously, they never took themselves too seriously, and I think that was part of the key to their success. Big characters without big egos. Always wanting to crack a joke, have fun, but not at the expense of their craft. Bravo. Also, great great videos. See them on YouTube.

The Stench
I first picked up a Stench cassette or (7 inch?) at Atomic Records on the East Side of Milwaukee. It wasn’t amazing, but there was enough there to keep me interested, and pick up future releases. They toured, played in Milwaukee (ad the Odd Rock Cafe, which was previously Cafe Voltaire) and they put on a good show. I kept getting their releases, even finding a cassette while my band was on tour and playing the hell out of it while driving. The thing about the Stench is, their music (and lyrics) helped me get through a really rough time in my life, so I keep going back to it. Sometimes music is like that. A few YouTube links; one, two, three.

Bratmobile
Who is the real Janelle? Only Bratmobile knows! I love the history of the band, their logo, and sometimes I just really enjoy hearing primitive (that’s a compliment) punk rock. they’re also one of those bands that you hear the progression of their craft over the course of their releases. Good stuff. Check it on Bandcamp or YouTube.

Dissent
Dissent may be one of the earliest political punk bands I started listening to. (Although often the act of just being a punk band is/was political.) One of the best things to come out of South Dakota, they weren’t around long enough to have a long discography but “The Epitome of Democracy” still gets a listen from me every now and then. They DIY’d the whole album themselves from recording, release, and distribution. Unfortunately Bob and his girlfriend Bobbie were killed by a drunk driver in 1992. I remember reading about it in MRR while at school and being devastated by the news. Here’s one song on YouTube, but you can find others by searching.

Sleep / Asbestosdeath
I still love Sleep, and this is probably an unpopular opinion, but I actually love Asbestosdeath even more, and often wonder how things would be different in the world if Asbestosdeath had continued on. Weird, right? If you don’t know of Sleep, I guess check out Bandcamp or listen to Asbestosdeath on YouTube and decide for yourself.

Virulence
Before Sleep, who are often credited as pioneers of the sludge/doom genre, there was Virulence. I remember picking up their album “If This Isn’t A Dream…” in 1989 (probably at Atomic Records) and listening to it a lot. It was slow, dirgey stuff… and it was good. I still give it a listen and like to see it as a spark that started a fire. The weird thing for me is, I don’t like most sludge/doom bands that came later. Why yes, you can check out Virulence on YouTube. (Also, I think Fu Manchu sucks.)

The Mr. T Experience
Dr. Frank and whoever he can find have been kicking around forever, and have put out so many gems over the years. I remember MTX staying at my friend’s parent’s house when they came to Milwaukee while on tour back in… 1988 maybe? All I know is they are poppy, punky, and fun, and they might have a song about a girl or something. Search the YouTube to find out more.

Pinhead Gunpowder
Does Pinhead Gunpowder qualify as a supergroup? I don’t know, and I don’t care. Aaron Cometbus is an old friend and while I was not a huge fan of Crumpshrine (sorry Aaron!) I absolutely love Pinhead Gunpowder and consider it the epitome of the Easy Bay sound… in a good way! I can put on their whole discography and not get bored. Amazing, right? Search YouTube for some stuff.

The Nation of Ulysses
I’ve already mentioned Chain and the Gang, so here’s The Nation of Ulysses with Ian Svenonius. This was wild and crazy 1950’s style (!?!?) rock and roll/punk rock from Washington D.C. in the late 1980s/early 1990s and I don’t think there was anything quite like it at the time. Svenonius was probably the key, but the rest of the band was also perfect so it all just worked. Somehow I think I missed seeing them live. I recall them playing in Madison and maybe it was one of those gig where I was outside, broke, just hanging out. I was I had seen them, or remembered seeing them. Fun fact: I got all the NOU CDs from a friend of mine. I traded some Nirvana records about a year before Kurt Cobain committed suicide. NOU on Bandcamp, and NOU on YouTube.

The Rondelles
This might be the only band on the list that my wife introduced me to. The Rondelles have a great lo-fi sound, raw, primitive, and catch as hell. One of those bands that proves you can just start a band and don’t need to be masters of your instruments because being in a band and making music is a journey that changes (and changes you) along the way. The drummer would play a 3-piece drum set standing up, while playing the keyboard with his drum stick. Wild, right? Hey, they’re playing a gig in 2023. Head over to Bandcamp or check out the YouTube.

Schlong
Good Grief! And then there’s Schlong. Formed from the ashes of Operation Ivy (sort of) and fueled by too much silly and too much beer (definitely). Schlong were amazing musicians and of had the stupidest lyrics, and I’m sure some people described them as “punk as funk” and others may have called their work “jazz punk” but since watching the film about the band (A Punk Side Story) I’ve been listening to a lot of Schlong. “Essential Schlong” on YouTube. Also, Schlong did the craziest thing any punk band ever did when they covered the soundtrack of West Side Story with Punk Side Story. Speaking of story, the story goes that a relative of Leonard Bernstein wrote a letter to Schlong saying that legally they should take action against the release but it was so incredibly well done that they would just allow it.

Liner Notes
Find out who your favorite musicians listen to, or who influenced them. If you read that Rollins loved the Stooges then you go listen to the fucking Stooges.

Likewise find out what people are singing/talking about. If Public Enemy and Ian Svenonius mention Fred Hampton in their lyrics and you don’t know who that is, go do some fucking reading and learn something.

The Other Music
Besides all these “normal” bands who produce “songs” and “albums” I’ve been listening to a bunch of weird synth stuff, mostly on YouTube. Maybe I’ve been watching stuff as well, but mostly listening. In case you missed it I started uploading “synth videos” last year, and I’ve been enjoying the synth community of people who just record themselves and upload it and keep doing it and if only because they fucking love doing it and have no delusions about “making it big” or “being discovered” but just want to make music because they fucking love making music and want to share it with the world. It’s pretty sweet.