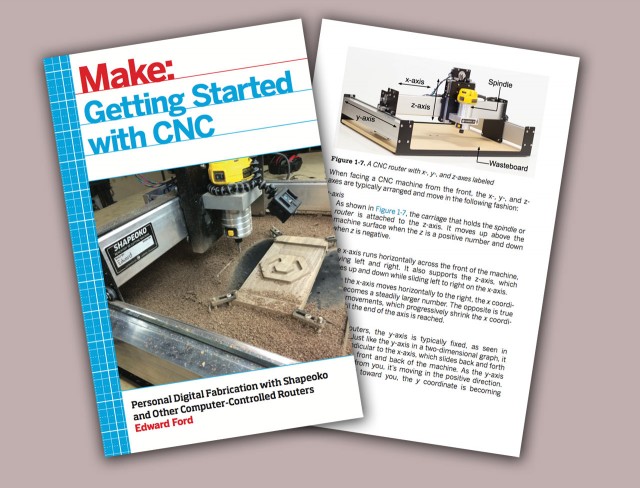 I can’t remember the last time I did a book review… Have I ever done a book review? I should, because on rare occasions I do read books. While stuck on a plane last weekend (as well as a horse farm with no WiFi or cellular service) I read “Getting Started with CNC” by Edward Ford. I met Edward many years ago when he came to Milwaukee Makerspace, and I’ve helped build a few Shapeoko CNC machines over the years. So when I saw his name as the author, I was excited to consume his knowledge of CNC machines.

I should state for the record that I didn’t just see this book and buy it. It was part of a Humble Bundle where you pay some small amount and get a boatload of electronic versions of books. I tend to fill my old iPad with these, and read them when I get the chance. Seriously, if you are a fan of any of the Make Magazine books, sign up at Humble Bundle. You’ll mostly get emails about games (boring!) but once or twice a year you’ll get an email about an amazing book deal. Totally worth it.

Oh yes, on to the review! The book itself is about 160 pages, not too long, but just enough to introduce someone to the world of CNC machines. (We’re talking CNC routers, not mills, or 3D printers, or laser cutters, though some of the concepts apply.)

There’s good information about end mills, and toolpaths, as well as software (commercial and free options) and it even gets into G-code a bit. There are also some CAD exercises you can do even if you don’t have access to a CNC machine. There are a number of good photos and diagrams to explain concepts and machines, and there’s a walk-through of a complete CNC project which involves inside and outside cutting, pocketing, and milling down the surface. It’s written in a very approachable manner.

Now, I’ve done some CNC machining over the years, but I am far from an expert. Still, “Getting Started with CNC” was a worthwhile read, and something I’d recommend to anyone who has any interest in using a CNC router to make things. 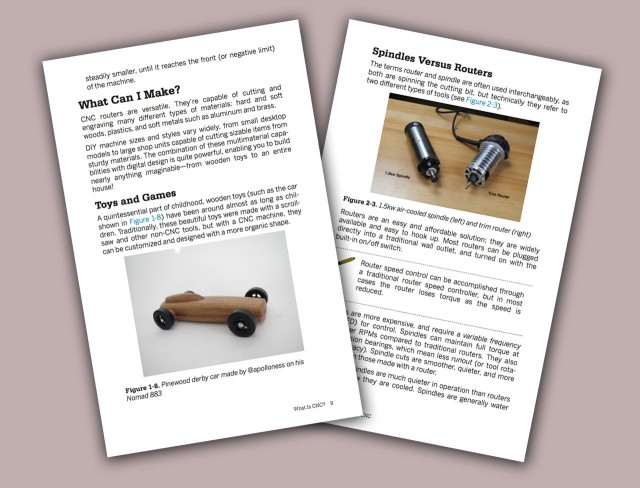 I do have a few very small complaints. I found a few typographical errors, as well as some images that appear to have had FPOs put in, and never updated. These are things I think I can mention because I’ve served as a Technical Editor, otherwise I wouldn’t have mentioned them. ;) 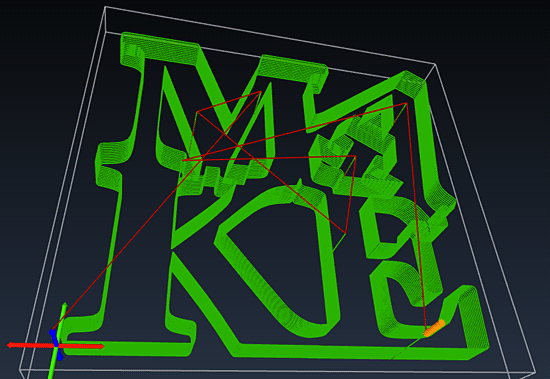 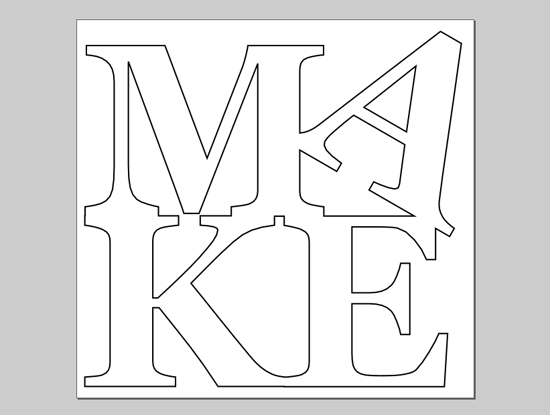 I started with my old MAKE design in Inkscape and set it to the size I wanted. I also placed it on the canvas as if it were on the piece of stock, knowing that the lower left corner would be the home position on the CNC router. 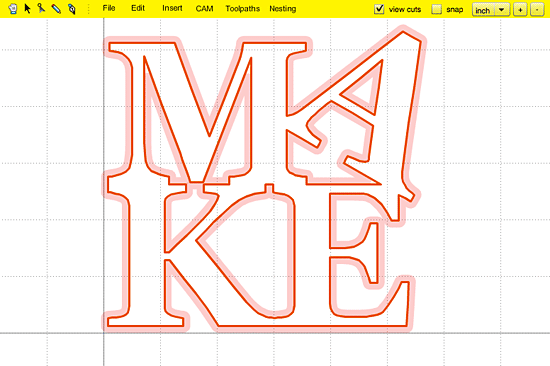 After I saved out my SVG file, I loaded it into MakerCam. Now, you can go to www.makercam.com and use that, or you can load up the SWF, and save it locally to run on your own machine. (Flash is required either way. I guess the source code is also available, but you probably need Adobe’s Flash development tools to do anything with it.)

If you’re using Inkscape, you need to set the prefs to 90ppi instead of 72ppi before you open your SVG file. Oh, make sure you check out the MakerCam tutorial, help, and about pages. 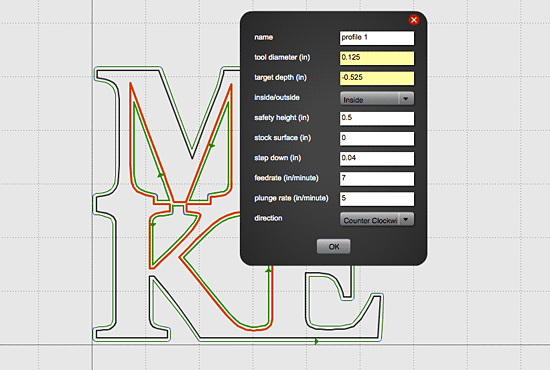 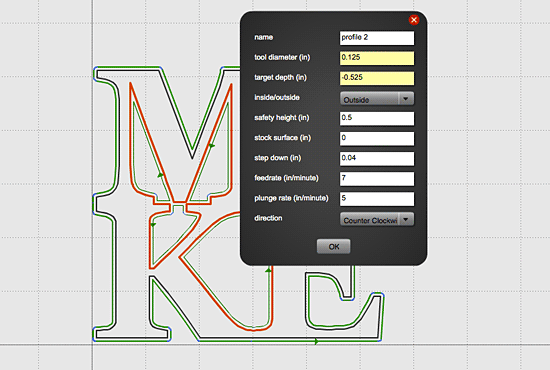 These setting worked fairly well. I would up the feedrate or the step down on our machine if using 1/2″ HDPE. This job definitely took a while to run… 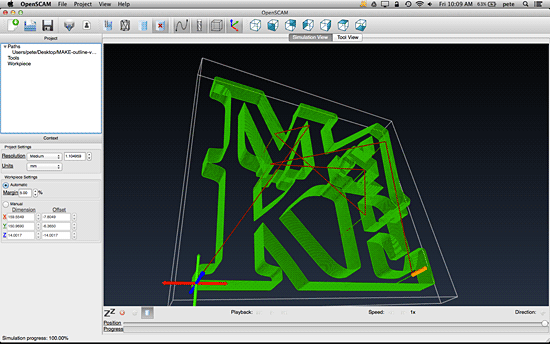 Once I had the toolpaths all set in MakerCam I exported the G-Code into a single file, and then loaded that file into OpenSCAM to run a simulation. (Looks like OpenSCAM recently rebranded as CAMotics… guess I should grab the latest version!) Running the simulation allows you to see the toolpaths and check how many passes it will take to cut through the material. I guess you could also use math, but sometimes I prefer visualizations…

That’s pretty much my workflow for 2.5D toolpaths; create art in Inkscape, load it into MakerCam and generate G-Code, load G-Code into OpenSCAM (CAMotics) and see how it looks. 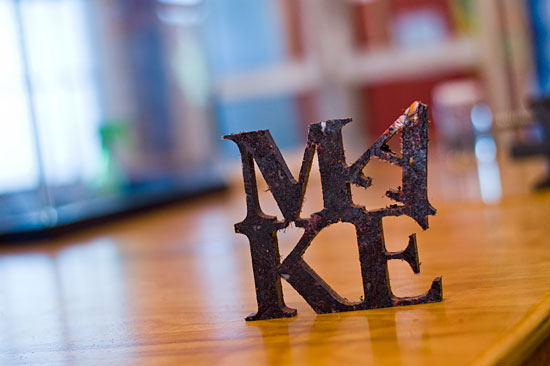 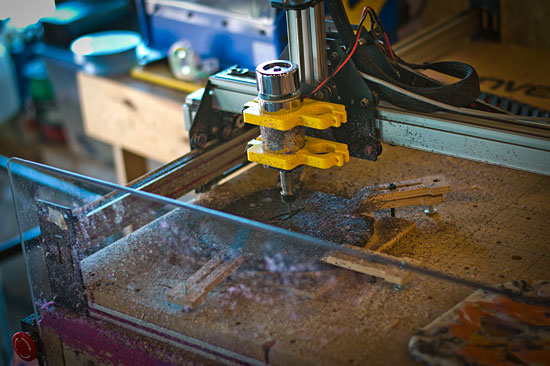 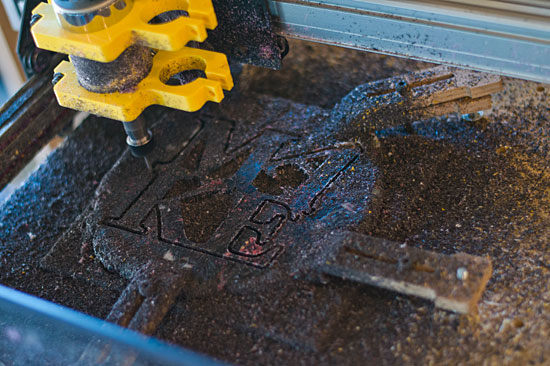 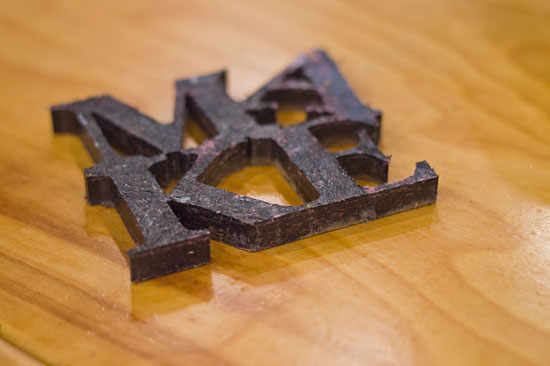 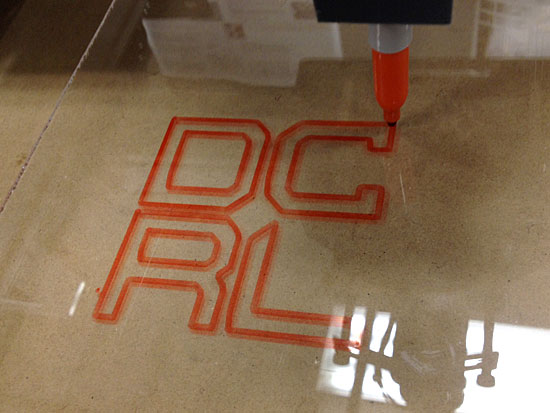 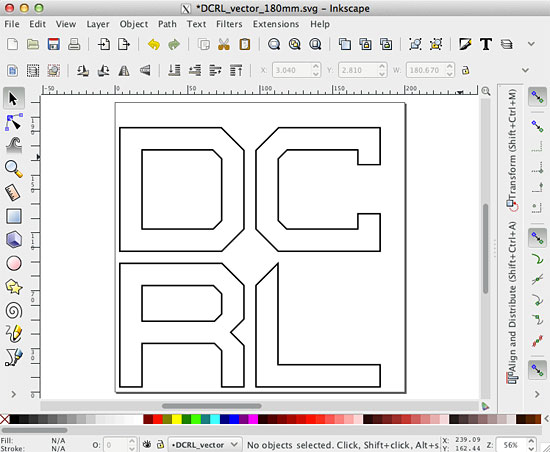 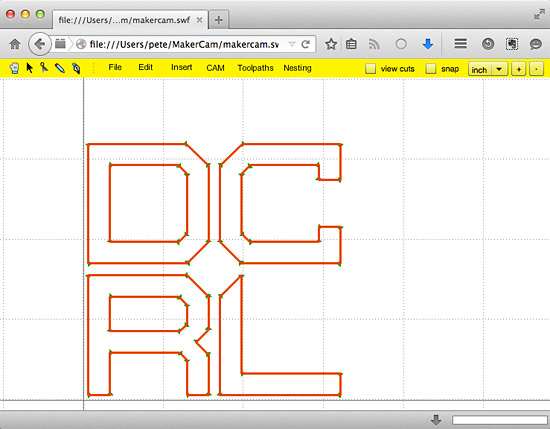 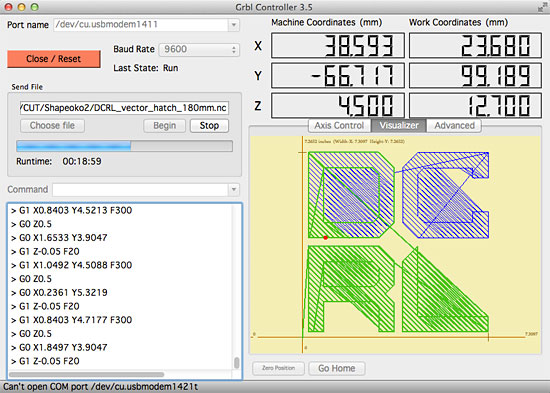