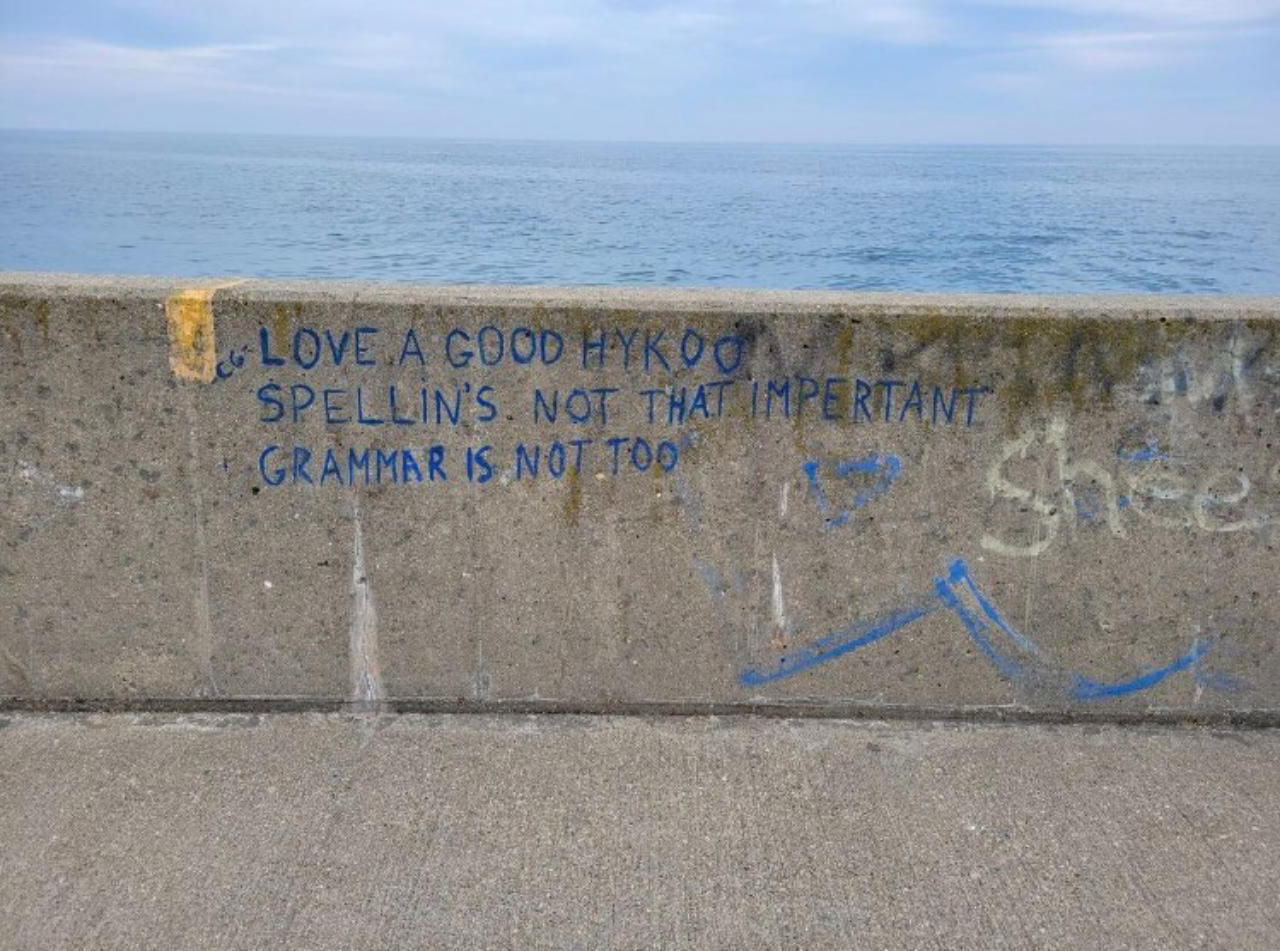 I am not a perfect human, and I have many flaws. One of these flaws is that sometimes I fail to recognize the efforts that someone makes and focus instead on the mistakes they made. When I say “mistakes” I am speaking of typographical (or related) errors in the publishing realm. First, a disclaimer. I’ve worked in publishing for over 30 years, and I also really, really, like to get things right. (I’ve even served as a Technical Editor for two books. And I still make mistakes!)

But when someone volunteers their own time to help promote something (good) and I point out the errors, I think I am being helpful… but I also need to remember there is a human on the other end of my feedback.

After a recent incident, a friend sent me the image above. Here’s where my brain does weird things. When I saw the word “hykoo” my brain did not translate it to “haiku” and I assumed it was a non-English word. Of course it’s just a phonetic spelling of haiku. Yeah, it took me a minute.

I think my friend thought I might be annoyed by this image, but I see it as art, and in art, there are no rules besides those the artist creates for themselves. I like the image you see above. 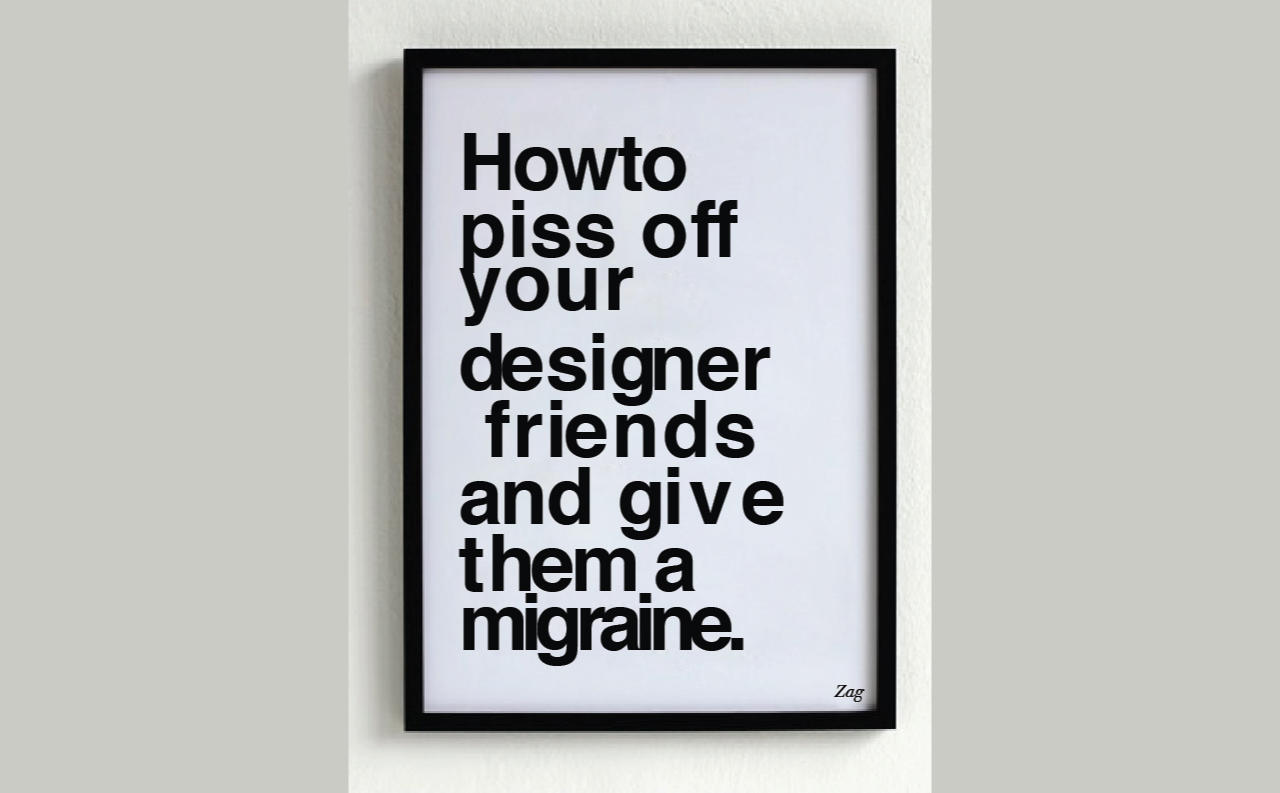 This one’s a classic! Did I mention I have a degree in Graphic Design? Well, I do. This will piss off all of your designer friends! Except, not really. It won’t. Not if they are good designers. As a designer, I recognize this was designed. I realize a designer made conscious decisions about how to space everything. The kerning and leading are not accidents, or defaults that were not adjusted by someone. The use of white space in this piece is quite good. This is all deliberate, and it works really well. (Except for the idea that it will piss off your designer friends.) 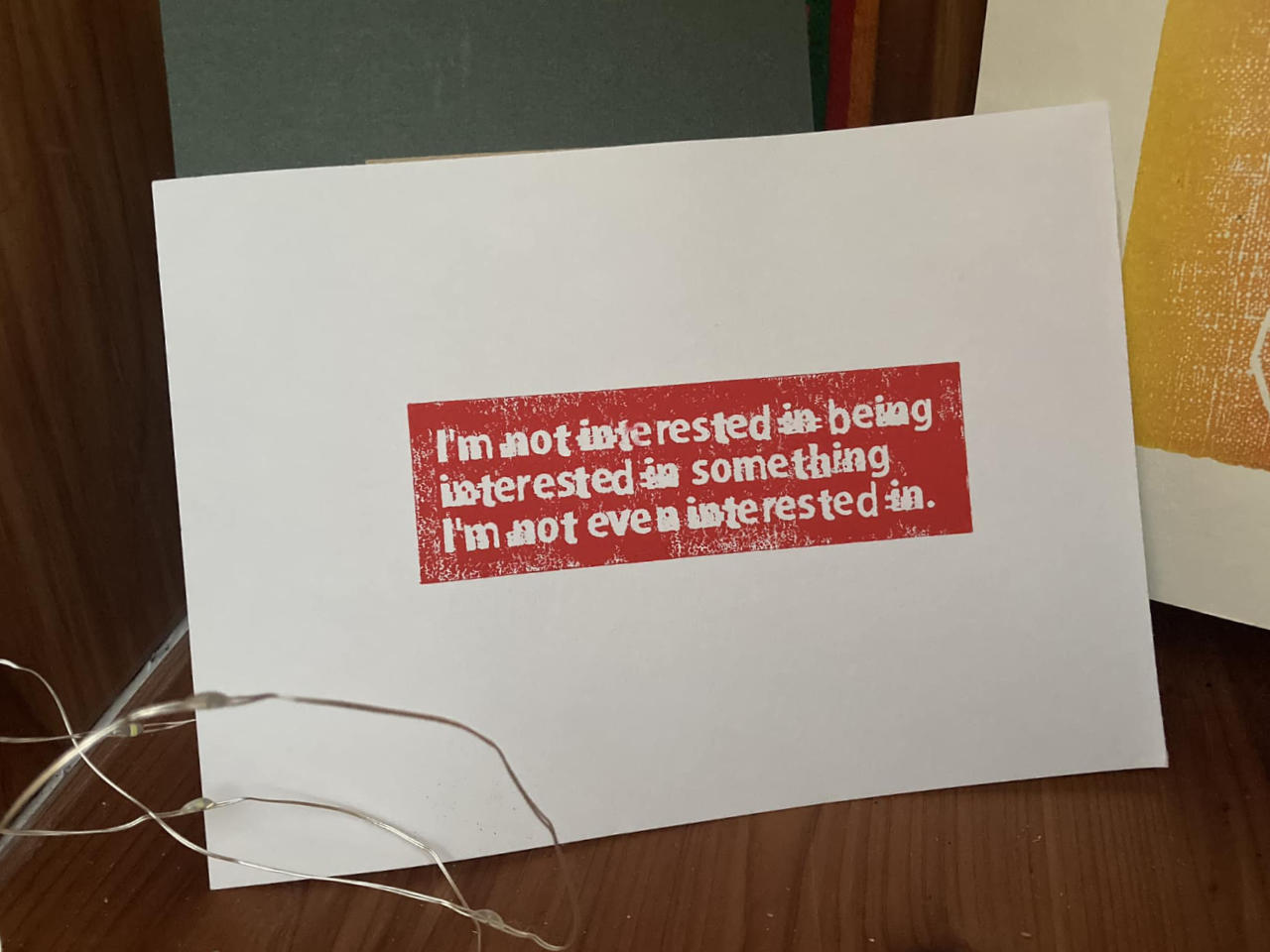 Here’s a recent print I created. The type is a bit distorted, and it may be difficult to read. That’s okay. This is a piece of art. Communicating the message is not the only purpose of this piece. In other forms of publishing communicating something as clearly as possible is probably the number one goal, and with that in mind, avoiding errors (typographical or otherwise) and creating a message that is clear, concise, and well written is what most people probably prefer.

But what do I know? I’m just a hack. (Also, let me know if there are any typos or other misteaks in this post.) 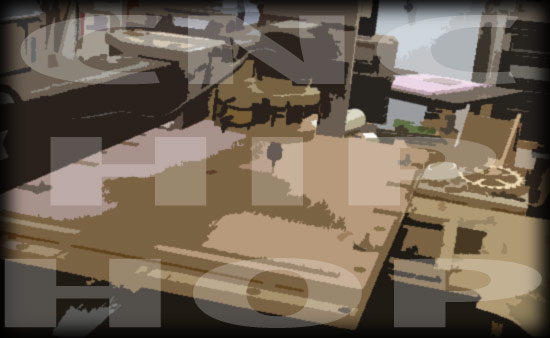 I don’t know if the Maker Movement has any hip-hop artists in its ranks, but at some point someone is going to want to write a rap mentioning CNC machines, so I’ve compiled a list of suitable rhymes for “CNC” and I present them here.

Note that some of these words/phrases are serious, and some of them are just for fun. It takes all kinds.

Alright! That should be enough to get started… can you think of any more? 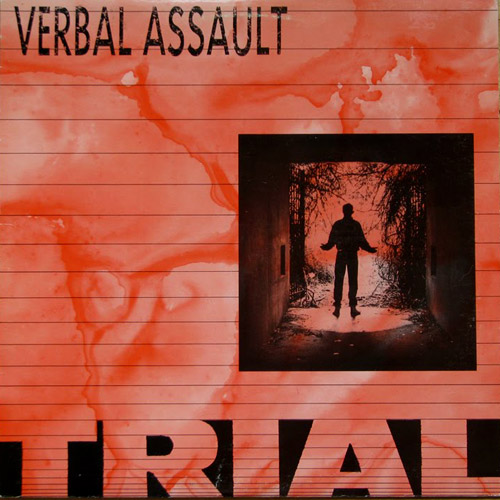 The year was 1988. I heard Verbal Assault’s album Trial, and I fell in love.

I spent the entire summer enjoying that album. And then fall, and winter, and the next year.

Verbal Assault also came to Milwaukee, and played at the Odd Rock Cafe to a small crowd. A very small crowd. I think it was a Saturday afternoon… the weekend Summerfest opened. It was great seeing them, but the live experience doesn’t have an affect on me the same way Trial does… even today.

For years I didn’t hear Trial… I had it on vinyl and it wasn’t available on CD, and my respect for artists prevented me from trying to find some illegal download of it. For years I checked verbalassault.com hoping to see Trial get released in some digital form, but it never happened. Finally, I gave up, and digitized my old worn out copy of 12″ musical magic. Hisses, pops, and cracks galore…

And it’s amazing. The sound quality is not great… I’ve got a worn-out needle on an old turntable with my battered vinyl. It’s also the greatest thing I’ve ever heard.

Maybe it transports me to an idealized time in my life: young and mostly care-free, but I tend to not buy into that salad days bullshit and in thinking about it, it’s the powerful words and music that still affect me.

Listening to it more than 20 years later, I start to wonder if it’s had a major effect on my life, or if it’s some strange coincidence that I find so much of it relevant to whom I’ve become.

So many of their songs have to do with persevering, and not giving up, and continuing when the odds are against you. Never stop. In all my years, I’ve always found it hard to quit things I believe in. It’s a rare thing for me to do. I don’t like to admit defeat. There’s plenty of things I probably should have quit over the years, but didn’t for one reason or another. I find a way to rationalize things. (I guess It’s a good thing I tend to do creative things, and not self-destructive things.)

So right now, I’m listening to Trial by Verbal Assault. And when I’m done with that I’ll probably listen to it again. That may continue for a while.

Here’s what someone else has to say about Trial.

So last year, during MilwaukeeDevHouse3 I gave old pal Boone a bit of guff as he was doing some writing for National Novel Writing Month and I told him I would just write a Perl script to write my novel for me.

Enjoy some of the excerpts below, and then download a PDF of the whole thing…

I ended up using source text from various places… Text of Obama’s Speech: A More Perfect Union, 75 words every sci-fi fan should know, and I believe the Unofficial Jargon File Word Lists. At least that’s what my notes tell me… Here’s some more!

Anyway, you can find the code here: https://github.com/raster/nanowrirobot

Did you ever wonder how del.icio.us got it’s name?

When .us became available, I wrote a quick script to figure out the shortest prefixes that would allow me to generate the most number of names:

I’ve used /usr/dict/words in the past to find strange and unique words. I’ll really have to remember to do that more often…