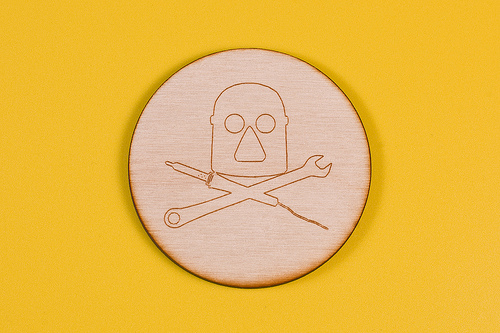 Since the dawn of time, man has battled against wood… no, that’s not right. What I mean is, since we got the Laser Cutter at the Milwaukee Makerspace, I’ve wanted to cut things out of wood with that powerful beam of light.

And now I have… mostly. Sort of. Yeah. My first (failed) attempt was when I cut a box, and tried to use whatever scrap piece of 1/4″ plywood I had lying around the house. (For you metric folks, that’s just over 6mm thick.) Since it was typical crappy plywood with layers and glue and stuff, it made some nice burns, but couldn’t cut through it. 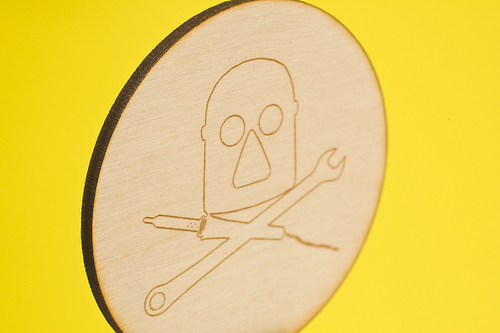 Well, here we are, with a nice piece of wood cut by the laser. This piece of wood is 3mm thick. (For you non-metric folks, that’s about 0.118110236 inches thick.) The Milwaukee Makerspace logo is etched into the wood, which makes this piece of laser cut wood at least 125% more awesome. 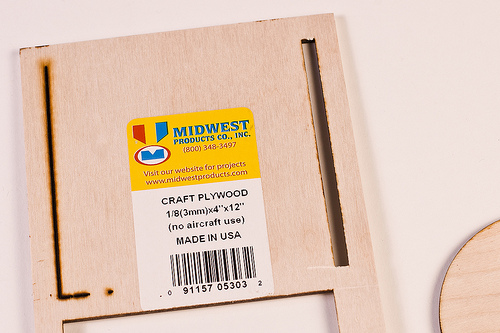 And what kind of wood is this? It’s not crappy plywood I found in the basement. I ended up going to the hobby store and buying a nice piece of wood, which you can see on the label, says it’s 1/8″x4″x12″ craft plywood. It wasn’t too expensive at $1.25, but I can’t really get larger pieces than that at the hobby store, so I’ll need to look elsewhere. (Oh, the receipt listed it as “Baltic Birch Plywood” which is what I want. (Baltic Birch is what they use for MakerBot frames. If you’ve got a recommendation on where to get it, especially local to Milwaukee, let me know!)

As my previous post mentioned, the laser cutter is just 25 watts, not super-powerful, and it may need a good cleaning, but if you’re willing to make a few passes, or a few passes plus a dozen, you should be able to cut the right type of wood, if it’s not too thick.

In my next post I’ll talk about preparing the file, as well as some tricks for multiple passes with the laser cutter.

Well, I’m glad someone finally conquered wood with the cutter! I made over 30 passes with the luan plywood and only succeeded in burning down to the glue….

Luan seems good for the router, but bad for the laser cutter. :(