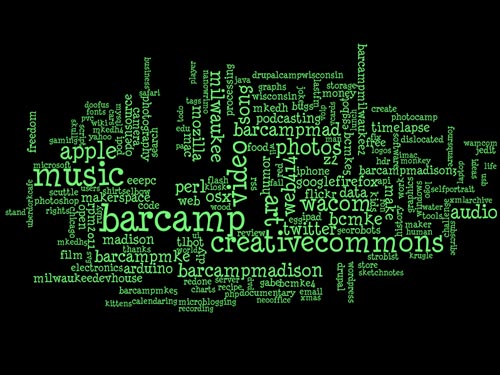 Not counting the comment feeds, I don’t think I have 1,000 feeds for this site… I think it’s closer to 800. Still, that’s a lot, and it should allow you to choose what you get.

We still have a good 9 years of content to go through, but we’ve been working on the tagging process for months now, and you can see the results on the tags page.

You only want posts about Mozilla, or Web414, or maybe you like a good accident story, or a nice drawing is more your style. Creative Commons? We got that too!

So for each tag there is a page, and an associated feed on that page that you can subscribe to.

If you want it all, just subscribe to everything, and enjoy the ride.

The following is a proposal for the use of machine tags for content related to Bucketworks. I’d love feedback from people familiar with machine tags, and people involved with Bucketworks.

The idea behind machine tags is adding a sort of namespace and hierarchy to a tagging system, and to assign it to a specific thing.

So for Yahoo’s Upcoming site (which lists events) PhotoCampMilwaukee had a tag like this:

These are used by Upcoming, which uses the Flickr API to gather photos for display on it’s site.

Now, we can assume that every event at Bucketworks would have a unique ID number, and use something like this:

This number could come from Drupal, CivicCRM, SalesForce, whatever… Just needs to be unique, and referenceable.

Now, we can see the same thing with users… on Flickr, if I see that Gabe is in a photo, I could use the tag:

So… extended to Bucketworks, if Gabe’s username there is “gwollenburg” we might use:

Hmmm, maybe Gabe is not a member… and lots of people who come to events at Bucketworks might not be members (yet!) so maybe it is better to use “person” (but then, “user” could be the proper term as well, as the people are “users” of Bucketworks, right?)

Obviously every person needs a unique (to the Bucketworks network) username we can reference them with. (Note that I used Gabe’s Yammer username “gwollenburg” and not his bucketworks.org username: “heygabe”. (Is there also a username in SalesForce? It would be nice if there was a way to cross-reference all of them, though really, we want the most publically used one, so they are easy to determine.)

Jenn asked about tagging photos at Bucketworks with the room names, so we might use:

Here are photos on Flickr with the tag bucketworks:space=playspace

(I went with “space” rather than “room” because I think it’s open to a wider interpretation, and luckily, Bucketworks seems to agree…)

(Are you thinking about geotags yet? They are another form of machine tags, and we should be using the coords for Bucketworks as well…)

The thing about machine tags is that you don’t so much just “come up with them” as they are defined by some entity, and then presented, and (hopefully) used.

So, if we did come up with a bunch of these, we would need to make them public, promote the use of them, show why you would use them (what cool things could be done, like, a slideshow with all photos from an event at Bucketworks) and having tools that make these things valuable would also be good…

What’s that? This reminds you of RDF, well, that’s okay :)