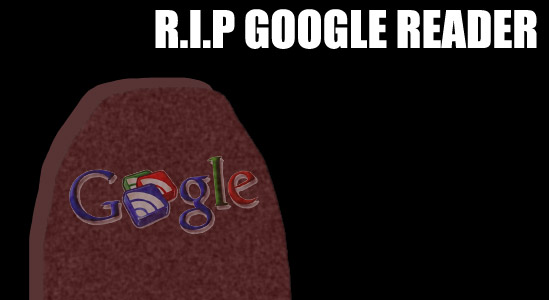 I tried Reeder on the iPhone last year, and I wasn’t immediately in love with it, it’s alright, but I don’t really do too much feed reading on my phone nowadays. Still it’s nice to have an RSS aggregator on my phone, and it’s the one I liked the best. It was $1.99 at the time (it’s $2.99 now) and I was willing to pay that without thinking much about it. It would probably be a better experience on a newer iPhone (I’ve got the 3G) but then, what wouldn’t be a better experience?

I mentioned that I don’t do too much feed reading on my phone nowadays, and that’s true, but I think a large part of it is that I now do a ton of feed reading on the iPad. In fact, on a lazy Sunday morning I’ve been know to spend a good hour or two catching up on my reading just as someone may have read a newspaper in the olden days when they used to print newspapers.

On the iPad I used MobileRSS for a while and like it well enough, except when they redesigned the entire UI during an upgrade. In reading some of the reviews, I kept seeing mentions that it ripped off the design of Reeder. I ended up trying Reeder on the iPad, and while it took me a little while to get used to it, I started to like it. At $4.99 for the iPad version, I grabbed it right away, and I really do love it now. I’d estimate that feed reading on the iPad accounts for more than 50% of what I use the device for.

I normally use Google Reader in Firefox, with some help from Stylish, to make it a bit prettier, but when the Reeder for Mac beta came out, I gave it a shot, and I liked it. I still didn’t do too much reading on desktop (or laptop) as compared to the iPad, but it was nice to have. The user experience is much better than the browser. That said, I was worried it would come out of beta and require a purchase to keep using it. Well, perhaps I wasn’t worried so much as concerned about the unknown price.

Well, Reeder for Mac is out, and it’s $9.99. Now, I know I’m cheap, but I sort of feel like it just isn’t worth it (at least not for me.) I mean, if I weigh how much I use my Mac for feed reading, versus how much I use my iPad for the task, it just doesn’t measure up. If it was $4.99 on the Mac, I’d probably be tempted to grab it. Of course I’ve already spent about $7 for the iPad and iPhone versions, so maybe that’s another reason I’m not ready to kick down another $10 to have another version of it running on yet another device.

Reeder is a really nice feed reader though, and I love it on the iPad at $4.99, but I’m just not convinced it would be worth $9.99 on the Mac. (Again, I’m basing this on my own reading habits.)

Kellan and Phil both mention it feeling not quite right, or just plain wrong, and I agree that it could be misused, so I thought I’d revisit some of the features I’ve added into my current aggregator of choice Feed on Feeds. (Aggregator developers, feel free to use any of these ideas in your products, if the clients improve, we all win, right?)

Ratings: Each feed gets a rating from 0 to 5 *’s. This allows me to easily hit my aggregator and just view the important feeds. If I have more time to spare, I can view the lesser rated feeds. I’ve found this to be pretty valuable in managing my attention. I also set any new subscription to 5 *’s to start with, so it’s immediately in my face, and I can drop it down to a lower level if needed.

Polling Frequency: The other big feature I added was individual polling frequencies, so I can set how often a feed is polled. I’ve really only got a handful that are set to 60 minutes (1 hour is probably the minimum for hitting other people’s feeds.) This allows me to up the frequency for feeds I might be in control of, that exist on my server, from my applications. In this case, I’d hate to be limited by the 1 hour most clients use. More important than that is the higher setting. I’ve got a ton of feeds that get checked every 6 to 12 hours, every day, every week, etc. I do this either because I know the sites do not update that often, or they are not important enough for me to worry about on an hourly basis. This mean less requests from my aggregator, and less hits to the servers that host the feeds.

Anyway, I applaud aggregator developers willing to introduce new features. We can push beyond just being a river (or puddle) of news in so many ways…

Long ago I started using Feed on Feeds, and I hacked the heck out of it do make it do just what I wanted, but of course as new versions of FoF came out, I never quite managed to upgrade an re-apply my hacks.

There’s been much talk lately about forking FoF, since Steve (the original developer) isn’t quite keeping pace with user’s requests, and people are wanting to see their changes fed back into the codebase. I can’t wait to see what happens with this, since it’s a piece of software I use on a daily basis. I just hope it all turns out good. I really should get the most recent FoF running and see how much I need to hack at it to get my hacks applied, and heck, maybe even make real patches…

I’m also considering moving it from my server out on the web to my server at home, since one is often overwhelmed while the other sits underutilized much of the time… red is due for an overhaul and install of all the latest and greatest from the LAMP world anyway…

Dave does like to go on about the River of News, and he does once again. What’s a “River of News” you say?

…there’s another kind of reader, an aggregator, that works differently, and I think more efficiently for the human reader. Instead of having to hunt for new stories by clicking on the titles of feeds, you just view the page of new stuff and scroll through it. It’s like sitting on the bank of a river, watching the boats go by. If you miss one, no big deal.

I sometimes think Dave’s thinking is clouded by, well, by being Dave. This isn’t a bad thing, it’s just what I’ve noticed. Maybe it’s just because I, and most people I know, are not like Dave. We have jobs we go to everyday, and other responsibilities that take precedent over spending hours watching a river go by…

I’ve used “river of news” aggregators in the past, and what I didn’t like about them was that they seem to take the approach that you’ve set aside a huge chunk of time for reading, or that if you miss something, that’s ok. In some cases it is ok to miss things, but there are some feeds I never want to miss an item from. Like the ones from friends of mine who publish less than once a month. I want to see the name of their site in bold text on the left side of my aggregator. As for the time factor, I also like the fact that I can use my aggregator to show all sites/feeds I rate as 5 stars, with how many new items they have, and selectively view a few if I have just a minimal amount of time to spare, like on a lunch break.

I’m not against the “river of news” but it’s just doesn’t work for me at this time. Perhaps when my daily responsibilites are reduced and my focus is almost completely on writing weblog posts, I’ll reconsider it…